The action-adventure thriller Ghostwire Tokyo first showed real gameplay on February 3, 2022 and announced the release date. The developers describe it as authentic, paranormal Tokyo and we think it looks wonderfully crazy.

This is Ghostwire Tokyo

Developed by Tango Gameworks (The Evil Within 1&2), Ghostwire Tokyo is an action-adventure thriller set in a paranormal Tokyo. As the protagonist Akito, you fight the various spirits in the first-person perspective using your elemental ether powers and try to unravel the mystery of what happened in Tokyo.

Now the first real gameplay has emerged that brings the story and the fights closer. There is also a release date: March 25, 2022!

“Nearly all of Tokyo’s citizens have vanished mysteriously, and otherworldly spirits (known as Visitors) have invaded the city. The protagonist Akito’s supernatural powers begin to manifest. As Akito combats the spirits haunting the city, he encounters a group wearing Hannya masks who may unveil the mystery behind the strange events in Tokyo.”

How the battles work: Thanks to your ethereal powers, you can unleash powerful elemental water, fire and air spells to vanquish your opponents. As the game progresses, you can further expand and strengthen your abilities via a skill system.

Akito not only relies on his new skills but also uses various weapons and items. So in the gameplay, we see how he uses a bow whose arrows are enchanted and also talismans to fight against supernatural beings.

In various situations, however, it is also advantageous to proceed quietly. You can sneak and take out enemies instantly with a stealth attack. Of course, blocking is also part of your repertoire and is an important part of surviving.

Large, authentic game world – This is Tokyo: The paranormal version of Tokyo that you will travel through in the game offers you many opportunities to explore. The developers describe their game world as authentic, even if ghosts are up to mischief there.

You can also use your skills to move quickly around the city and get to high places with a magic grappling hook.

The world and monster design look really great. Tango Gameworks has already proven with The Evil Within 1 & 2 that they can create grotesque creatures and tell an exciting story. Ghostwire Tokyo seems to follow the same path, only with more action and less horror. Nevertheless, the game world is very fascinating, and we can hardly wait to plunge into paranormal Tokyo.

Ghostwire Tokyo has a Release-Date!

After the release has already been postponed, the final date is now set. Ghostwire Tokyo arrives on March 25th for PC and PlayStation 5 as a time-exclusive console release.

Anyone who orders Ghostwire Tokyo in the deluxe edition will of course also receive various bonuses. 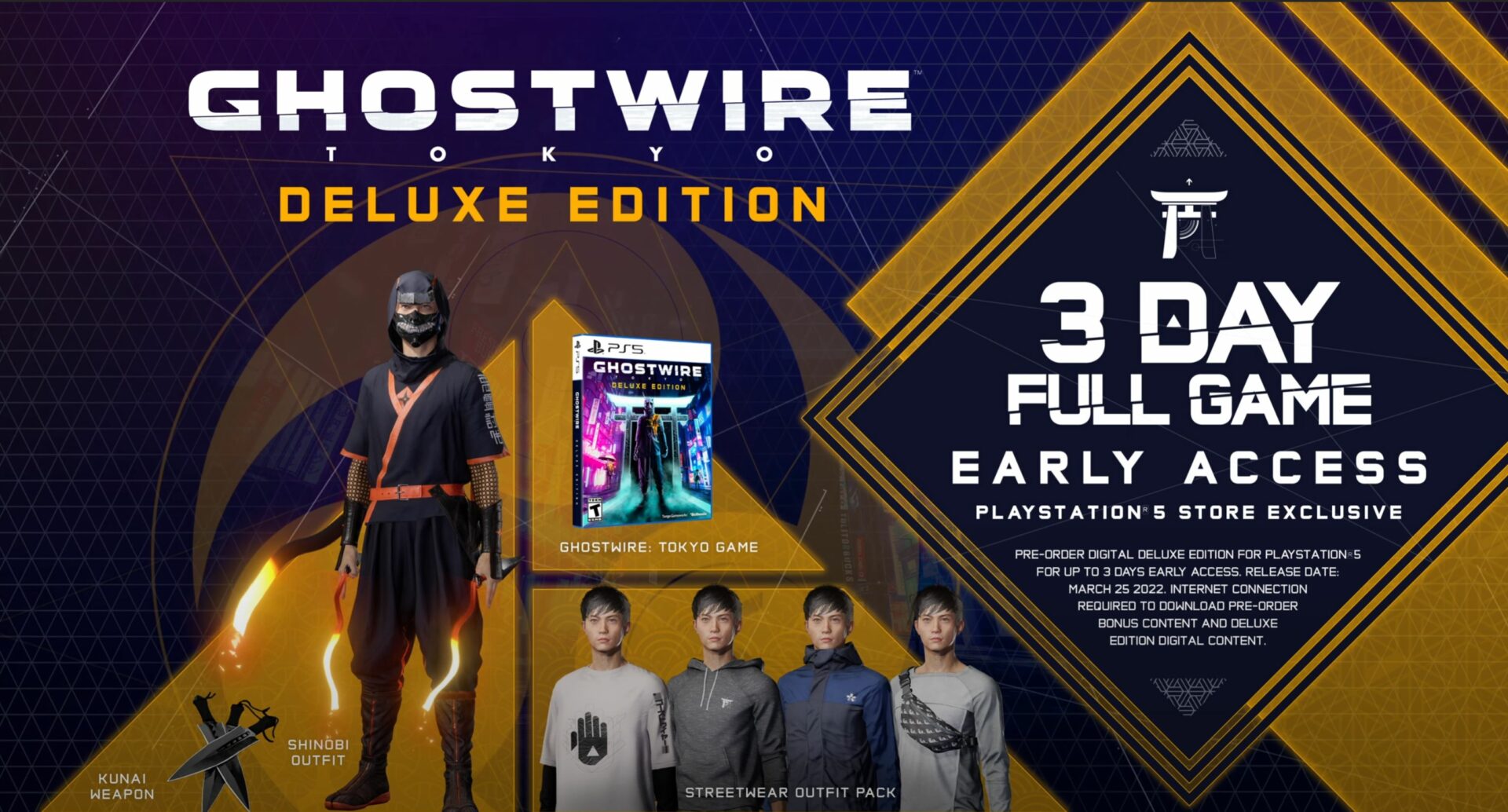