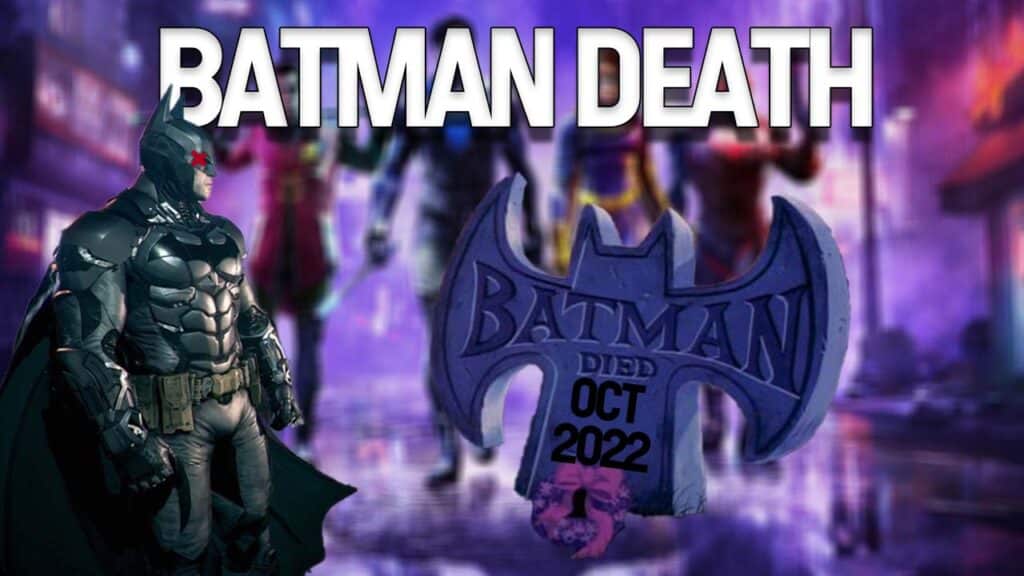 Gotham Knights: How did Batman Die & is he Really Dead?

We don’t know much about Gotham Knights, but we know that Batman is dead. What are the exact circumstances of his demise, we try to answer in this article.

Here’s the deal: We know that we can play one of four heroes in Gotham Knights. These include Robin, Batgirl, Nightwing, and Red Hood. The game will be released on October 21, and you can hunt down criminals alone or in pairs, regularly switching between the heroes.

Not much is known about the story. So far, all we know is that Batman is dead. How it came to this, why Batman is dead and who killed him is what we want to clarify in this article. The basis for this is a recently published leak that showed the prologue of Gotham Knights. In the meantime, however, the video has been deleted, which indicates that the information should definitely be taken seriously.

How did Batman Die in Gotham Knights?

One of the first questions that many ask is how Batman died. Until now, it was only known that Bruce Wayne served as the Dark Knight in Gotham for 15 years. A previously unknown situation eventually forced Batman to destroy the Bat Cave. In this explosion, Batman died. Shortly before that, Bruce triggered the Code Black. Meanwhile through a video known who is the actual trigger for this self-destruction.

Death in Battle – Who Killed Batman?

But if not only the destruction of the Bat Cave killed Batman, who was it? In the leaked video, it was obvious which villain was behind Bruce’s demise. In the cutscene, it was seen that Batman was hit out of nowhere by a poisoned arrow.

It turns out that it is a member of the League of Assassins. What this organization is, we’ll clarify later. After a few blows, the assassin takes off his mask, and we are shown the real villain – Ra’s al Ghul.

During the fight against Ra’s in the Bat Cave, it looked more and more like Batman would lose. As a result, Bruce, standing in front of his sidekicks’ costumes, executed Code Black. In doing so, Batman blows up the Bat Cave to bury Ra’s and himself. Batman thus dies the heroic death, sacrificing himself to save Gotham from Ra’s. The Code Black has also sent a pre-recorded message to the four Gotham Knights, in which Batman hands over the scepter to the four heroes.

Who is this Ra’s al Ghul? Ra’s is the head of the Demon, the leader of the Assassin League. He has lived for many years and is almost immortal. This is because he regularly takes a bath in the Lazarus Pit. As a result, his wounds heal quickly, and due to his long life, he has gained a lot of experience in combat. He was even a kind of mentor for Bruce, and Batman learned many of his fighting skills from him. The League of Assassins thinks that evil can only be defeated by fire and destruction. Since Gotham is brimming with corruption, violence, and crime, Ra’s wants to destroy Gotham. On the other hand, Bruce wants to save Gotham by eliminating individual criminals. Because of this disagreement, Bruce left the League and became an adversary of Ra’s al Ghul as Batman.

Is Batman Really Dead in Gotham Knights? That’s What we Know

What fate befell the Dark Knight after his body was not found in the Batcave is unclear throughout the game. Then, at the end of Gotham Knights, we learn what happened to Batman’s body and whether there is hope for a return.

What are the Consequences of Batman’s Death for Gotham Knights?

Since Batman’s death occurs in the prologue of Gotham Knights, there are far-reaching consequences. For one, Code Black has been triggered, which brings the four Knights together and confronts them with the task of protecting Gotham from all evil.

This could be difficult because the loss of the Dark Knight means that the city’s greatest hero has died. Word of Batman’s death will quickly spread among the villains and ensure that there will be a rise in crime in Gotham. After the death of Jim Gordan, the police are also not well-disposed toward the heroes. The Code Black also gave the Knights the Bell Tower as their base and command center.

After the death of Batman, the four heroes will probably want to investigate the demise more thoroughly. Presumably, they will continue to hunt Ra’s al Ghul if he was able to recover after the explosion in the Bat Cave.

Do you want to join our community and discuss Gotham Knights? Then join our Discord server, we are looking forward to see you there!