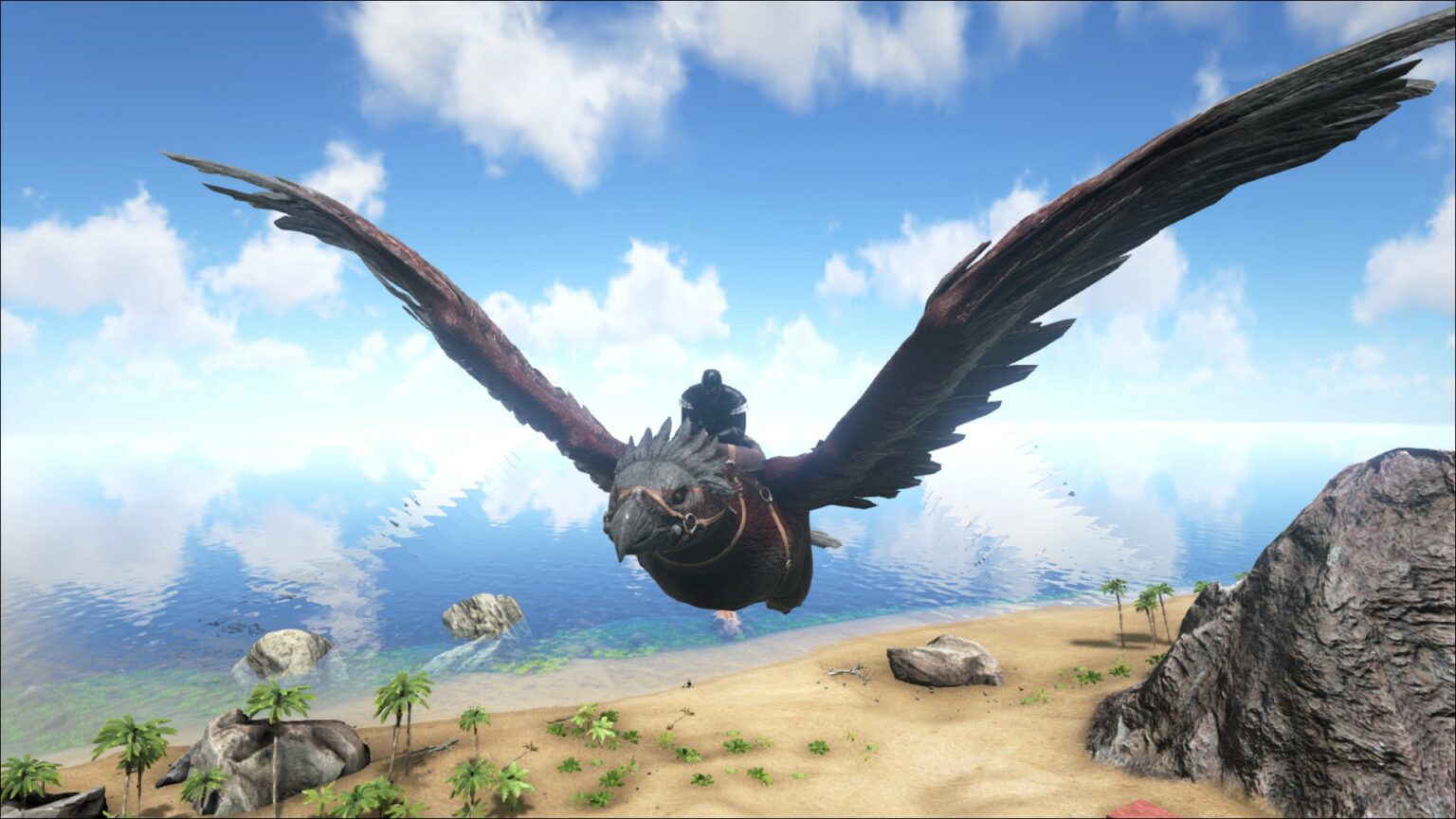 Imagine yourself sitting atop a winged dinosaur: soaring over the breathtaking landscapes in ARK: Survival Evolved. So that your first flight isn’t your last, we suggest you take the time to familiarize yourself with the controls. Below, we’ve compiled the vital information you need to keep you flying high.

The Flyers at a Glance

There are many flying creatures in ARK: Survival Evolved, but not all of them are rideable. Currently, there are five flight-dinosaurs of relevance. These are:

Generally, you need to tame the creature before saddling-up. The best way of going about this will vary depending on the Dino’s attributes.

As soon as you tame your winged steed, you have to learn how to use it. Upon mounting, the Dino goes into flight mode and can be directed like all other rideable creatures. If you want to land, press the standard key to jump (on the PC, it should be the space bar). The creature then looks for a suitable point to land, and will switch to walking. This can be particularly useful when “parking”. If you press the button again, you go back into the flight mode. When flying, always pay attention to the endurance indicator. This is especially important with low-level creatures as they often have little endurance.

Use the standard button to hang down (X on the PC). This is useful if you want to stay directly above a Dino to grab it. To grab, press the alternative attack button (the right mouse button on the PC). If you do it a second time, you release the creature or player back to freedom. With this technique, you can bring a wild Dino directly into your base and tame it there without disturbance. If you want to use this same technique in a fight against other players, then be careful. A player caught in a Flyer’s claws can still attack. All it takes is a single, well-placed shot with stunning ammunition to send a Dino into a coma.

Tip: Always have a parachute. It counteracts an impetuous impact on the island floor.

Some of the mounts have special abilities that you can make use of. In flight, the Pteranodon can make a forward roll. To do this, use the default key for ducking (on the PC, it should be C). The role deals more damage if you hit a target, but also consumes more stamina. In general, the Ptera is ideal for travelling long distances in a short amount of time. However, it can bear very little.

If your options don’t include a Quetzal, you can use an Argentavis. A tame, weight-trained Argentavis can transport a fair amount of resources. It can also—like the Ptera—attack smaller creatures, even while they are attacking the claws. To do this, grab the creature and then press the standard attack button (left mouse button on the PC). This tactic can be incredibly useful if you want to separate a high-level raptor from a whole group.

Something else worth mentioning for PvP players is the Tapejara. A total of three players can be seated on its saddle with of the two passengers able to fire weapons. This is especially useful for taming hard-to-reach or aggressive creatures. Moreover, the Tape is incredibly manoeuvrable. Currently, the Tapejara is the only creature that can fly backwards as well as sideways. It can also be used as an elevator to move up and down by alternating between the buttons for crouching (C on the PC) and for placing it down (X on the PC). One last gimmick—it’s the only mount that can land on vertical surfaces. Fly to a cliff, push the space button, and it clamps directly on the cliff wall. A real Swiss Army Knife!

By far, the Quetzal is your best bet when it comes to carrying a lot of resources. You can even hang a saddle on a saddle and build a small building or cage on it. Many also use it as a flying battleship and place numerous protected towers on it. In addition, the Quetzal is able to grab larger creatures with its claws—so transporting a mammoth is no longer a problem. By the way, if your Quetzal is carrying a platform, you can descend onto it. This regenerates your stamina without having to land. Just make sure to keep an eye out for enemy creatures or nearby players.

Finally, there’s the Pelagornis which can provide you with a decent amount of fish. It does ten times damage to them, which means they are done after only one hit. It’s also practical—Pelagornis deals a deadly blow and then automatically takes up the resources. In this way, fish and meat can be collected in an extremely short period of time. By the way, he can also swim. This isn’t possible with a player on its back, but it’s useful nevertheless.