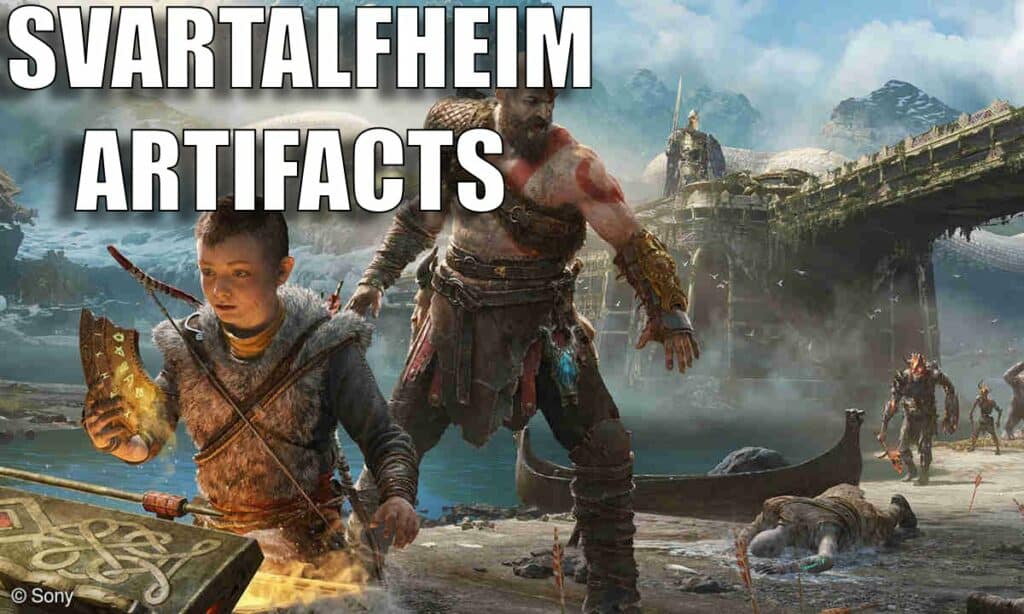 God of War Ragnarök: All Artifacts in Svartalfheim

As one of the nine main areas in God of War Ragnarök, you’ll come to Svartalfheim relatively at the beginning, where you’ll be able to collect eleven artifacts during your journey.

These are artifacts: Artifacts are collectibles in God of War Ragnarök. With them, you’ll get more knowledge and background information about the characters and the game world. Apart from that, the main use of artifacts is that you can sell them to the dwarves for hacking silver.

All Artifacts from God of War Ragnarök in Svartalfheim

There are two types of artifacts in God of War Ragnarök:

Artifacts are marked with a purple glow in God of War Ragnarök. In our guide, we will show you all the locations of these artifacts. Svartalfheim itself is divided into seven sub-regions:

Numerous collectibles are waiting for you to discover in these seven regions, including eleven artifacts. In this guide, we will show you all the locations of these artifacts.

All Artifacts in Aurvanger Wetlands

In the first area of Svartalfheim, you can find two artifacts. The first artifact “Hreidmar’s Brassard” is stuck in a corpse near the big water wheel. Go there by boat and go ashore. Freeze the two geysers there with your axe. Then you can pull yourself up with your chaos blades and take the artifact. 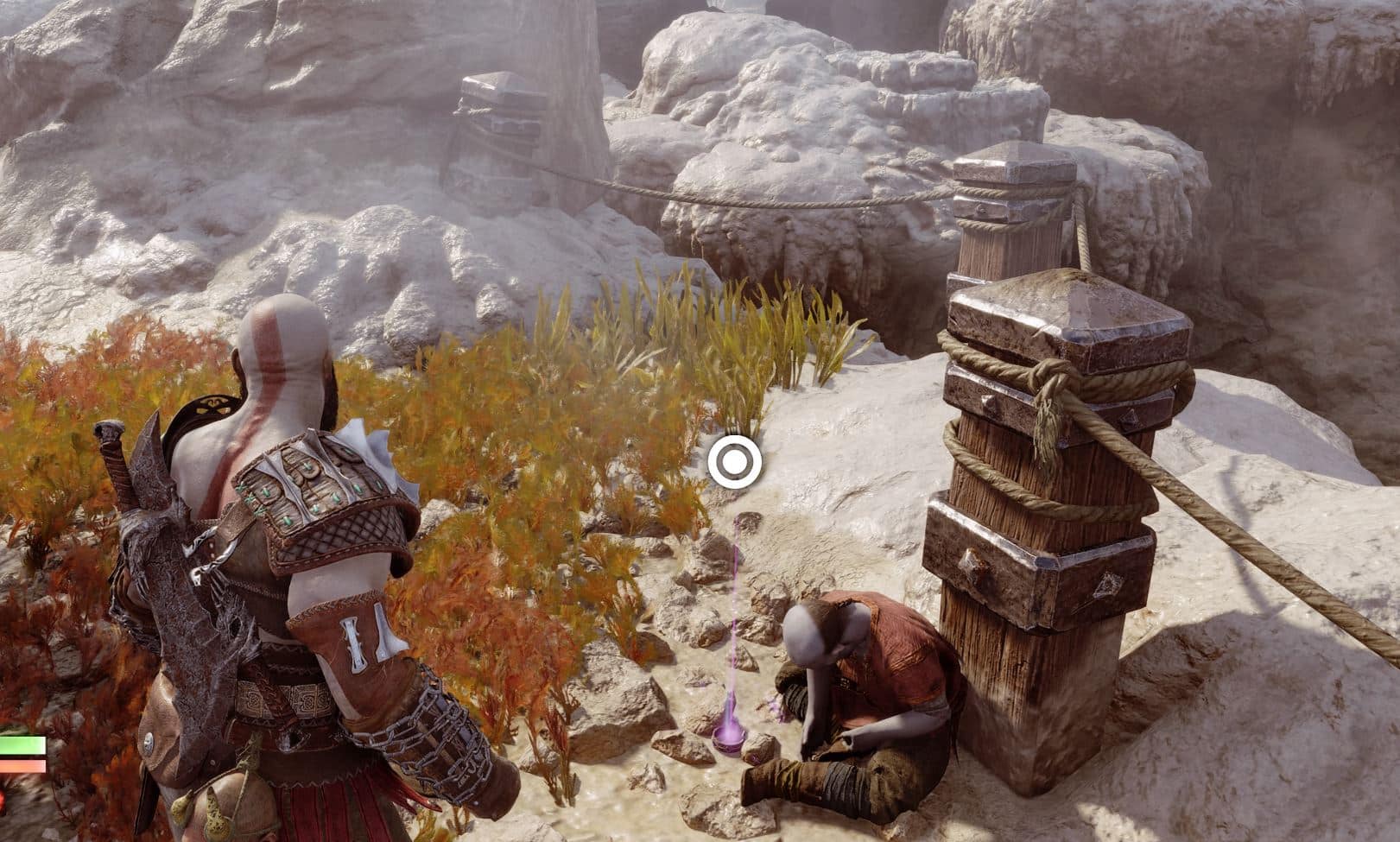 The second artifact is the poem “Sunrise of Nothingness” by Kvasir. It also lies by a corpse next to the second chain that opens the last water gate before the dwarven city of Nidavellir. The quest “The Quest for Tyr” will automatically lead you past this place, so you can’t miss the artifact. 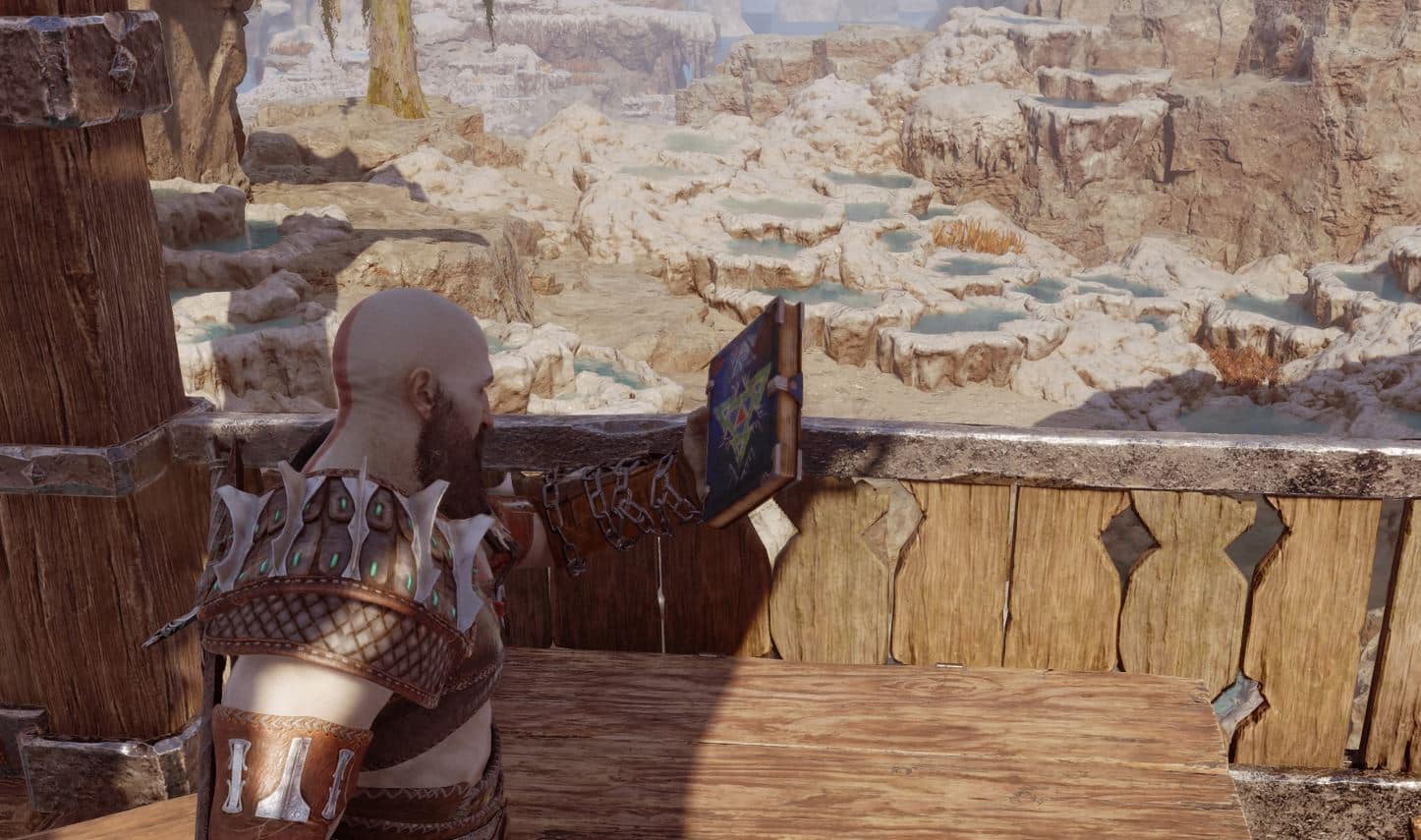 All Artifacts in the Dwarven City of Nidavellir

The first artifact in Nidavellir is again a poem from Kvasir. You’ll find the “Large Society Ground Orb, The Performance” at the city’s docks, where you first step ashore. To your left, you’ll see a green glowing barrier. You can only destroy it with a sonic arrow, which you can buy from Sindri in the square nearby. Once you have destroyed the barrier, you can take the artifact. 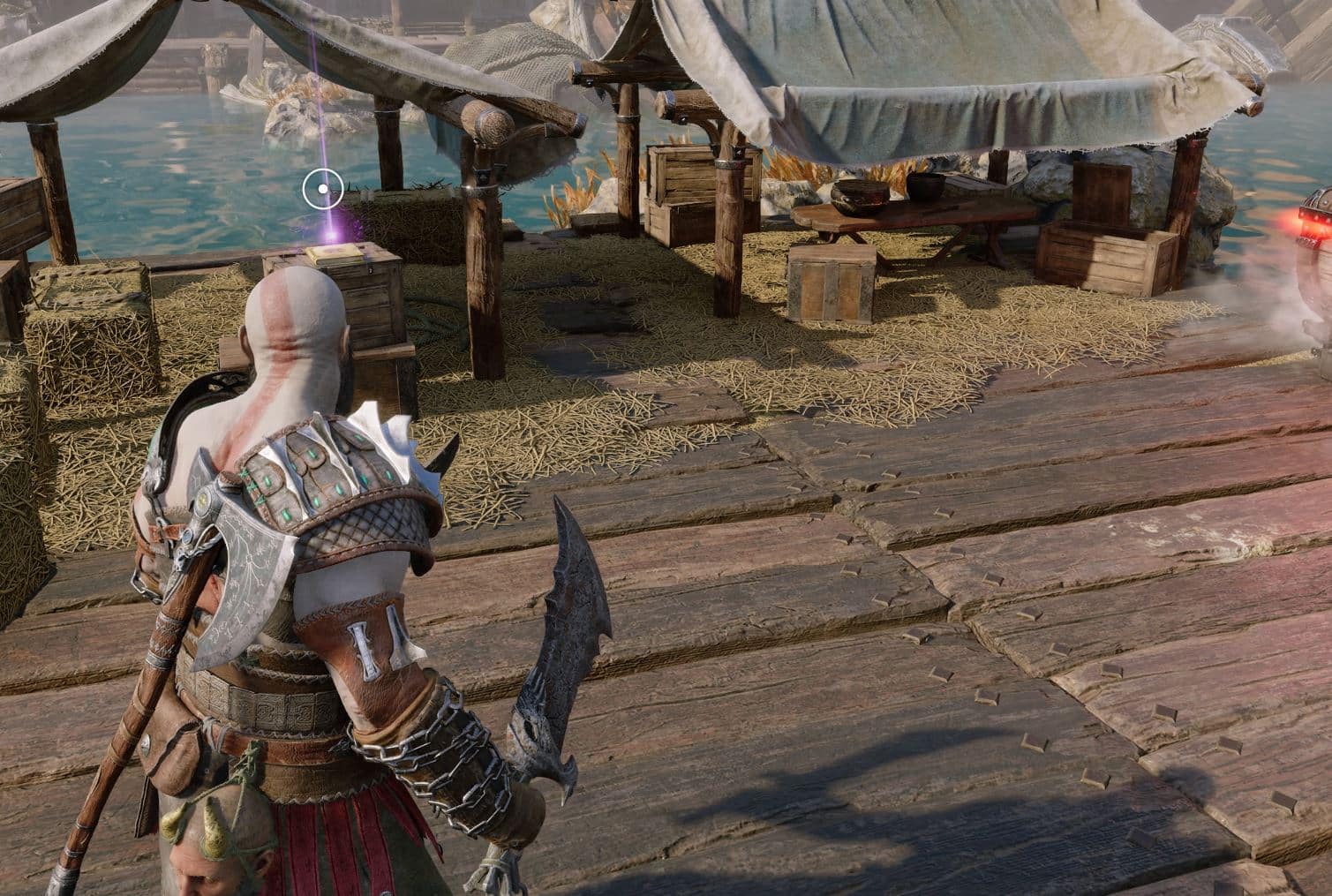 You’ll need Sindri’s sonic arrows again in a moment. Go through the sewers to the other side of Nidavellir and follow the path to the left until you reach a bridge. Jump down to the left of the bridge. Use the sonic arrows to open a secret passage here, at the end of which you have to turn left. Another passage follows, at the end of which the artifact “Griep’s Firebomb” is waiting. 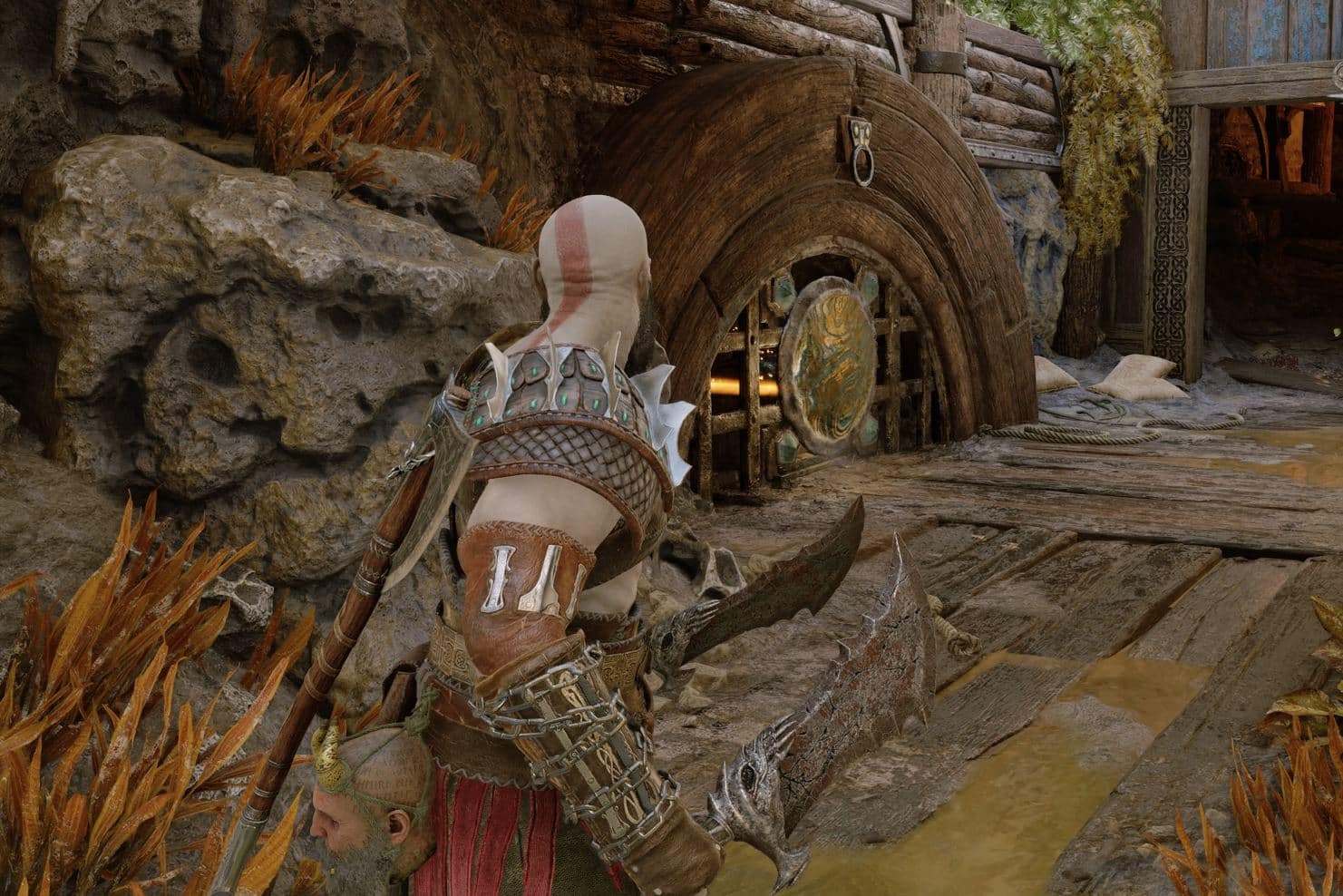 All Artifacts in the Applecore

The first artifact in the apple core is “Durin’s Stone Statue”. It is on the left before the door that takes you to the boss fight against the Hateful One. 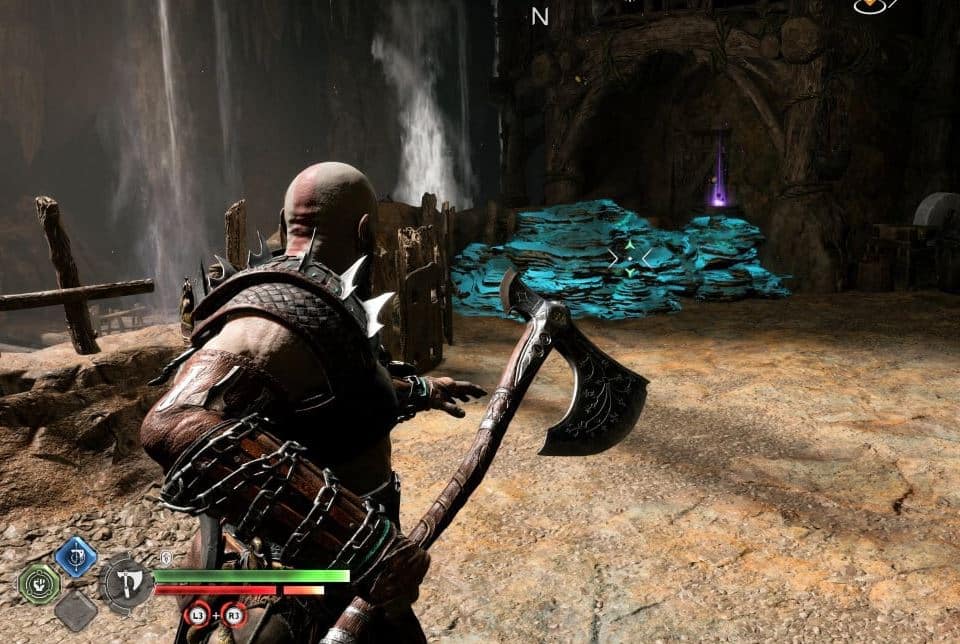 Next, you can collect “Althjof’s Statue”. To get it you have to cross the apple core until you reach a place blocked by a big boulder. Climb up the ledge next to the boulder and destroy the explosive vase from above with a throw of your axe. Now you can jump to the other side and bag the artifact that lies behind the big gate. 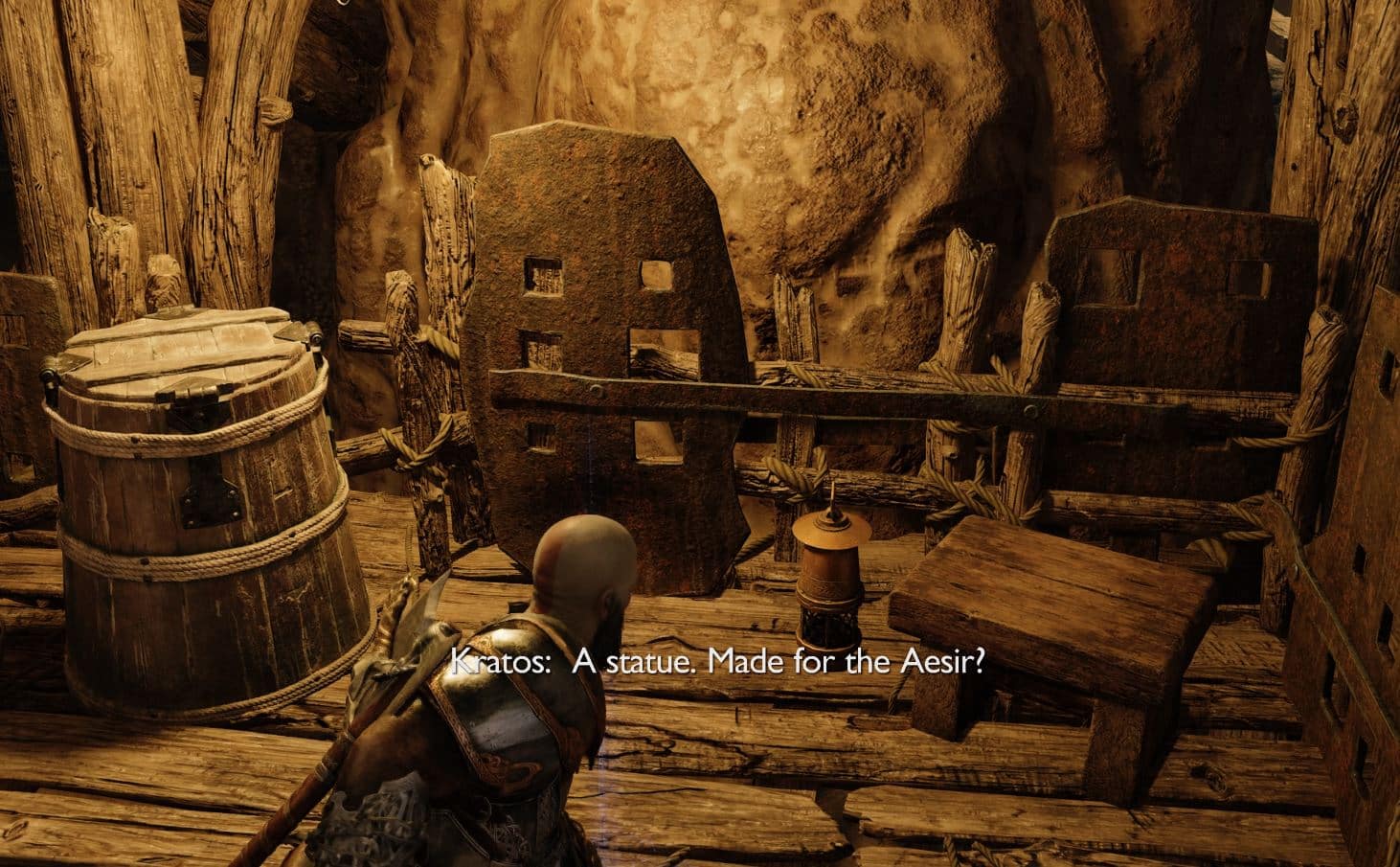 Kvasir’s poem “Sanguinity” is the third artifact in the apple core and can be found after you return to the apple core. From the ferry, run through the back entrance of the Apple Core to this rock and destroy it with a spear throw. Behind it lies the artifact. 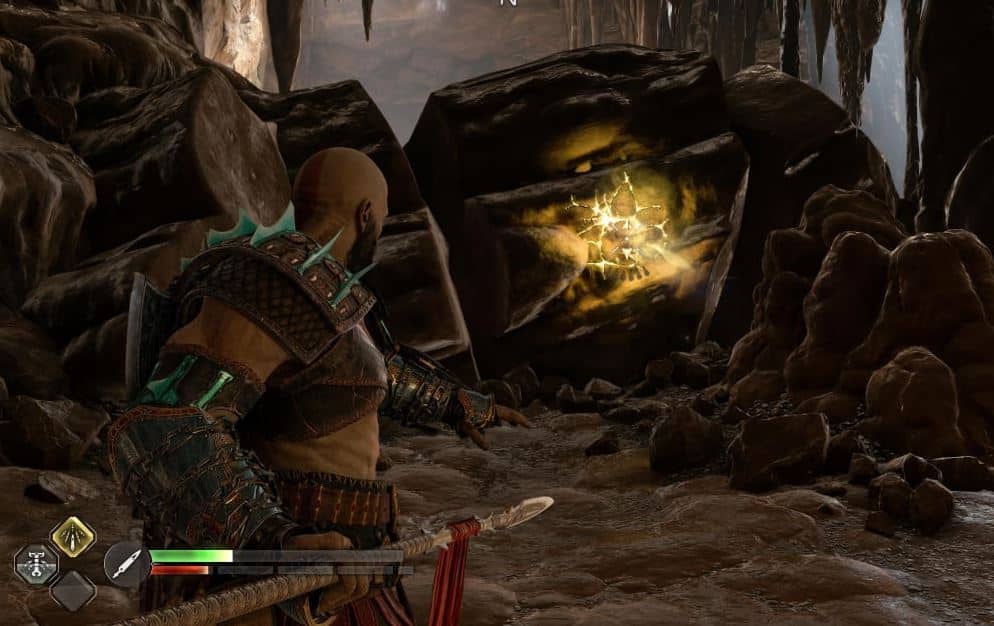 All Artifacts on Lyngbakr Island

The second part of Kvasir’s poem “We Who Remain” and the only artifact on Lyngbakr Island is located very close to the knowledge marker of this region. Next to the marker, you can climb up a wall. At the top follow the path to the west. At the end of the platform, you will find the artifact by a corpse. 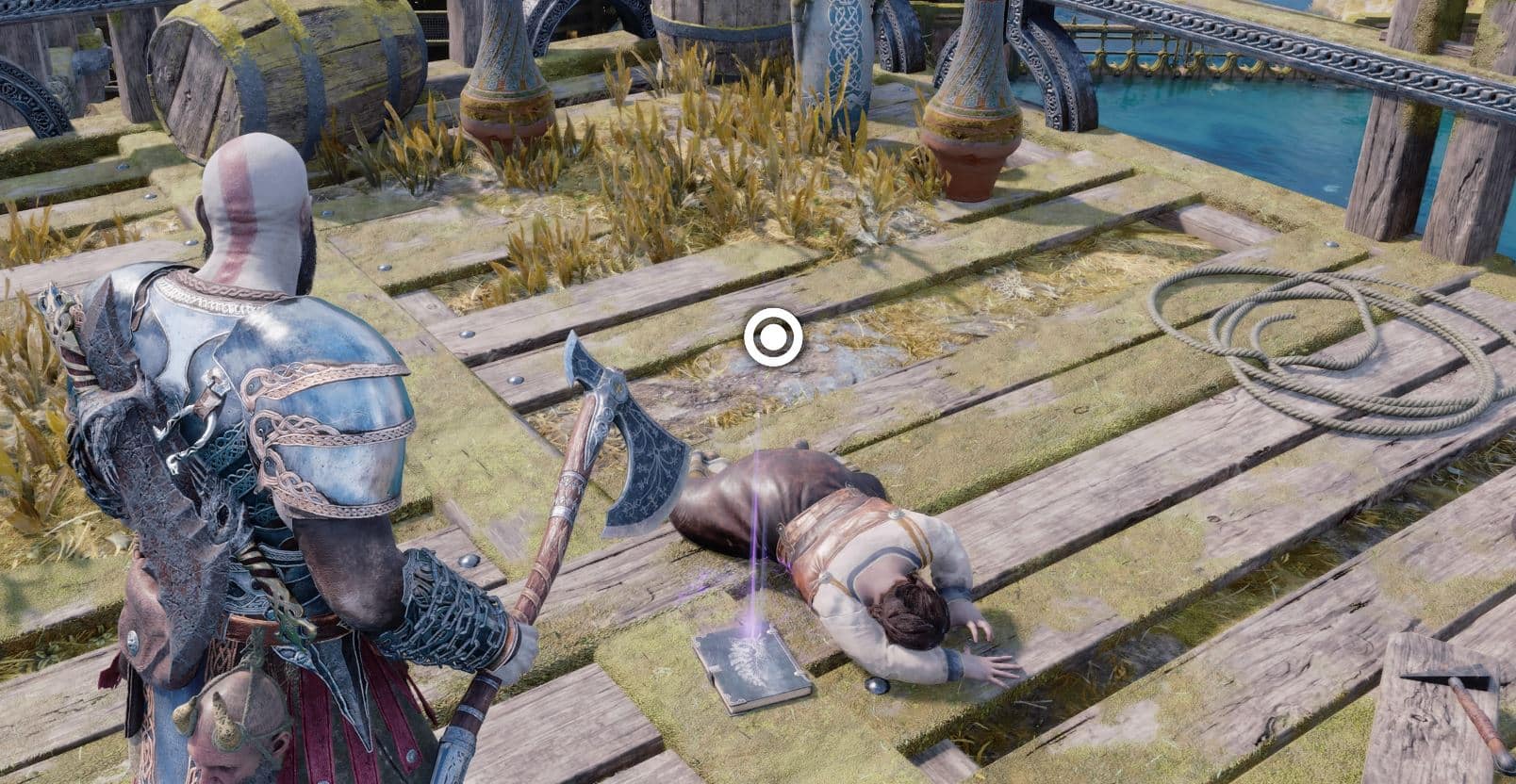 All Artifacts in the Jarnsmida Pitmines

You will find the first artifact of this region “Lofnheid’s Whetstone” after your second ride on the train that takes you to the mine. After this train has crashed, you’ll have to take out a few enemies first. Find the place where you can use a chain to get down to the water on a platform. There you will find the artifact. 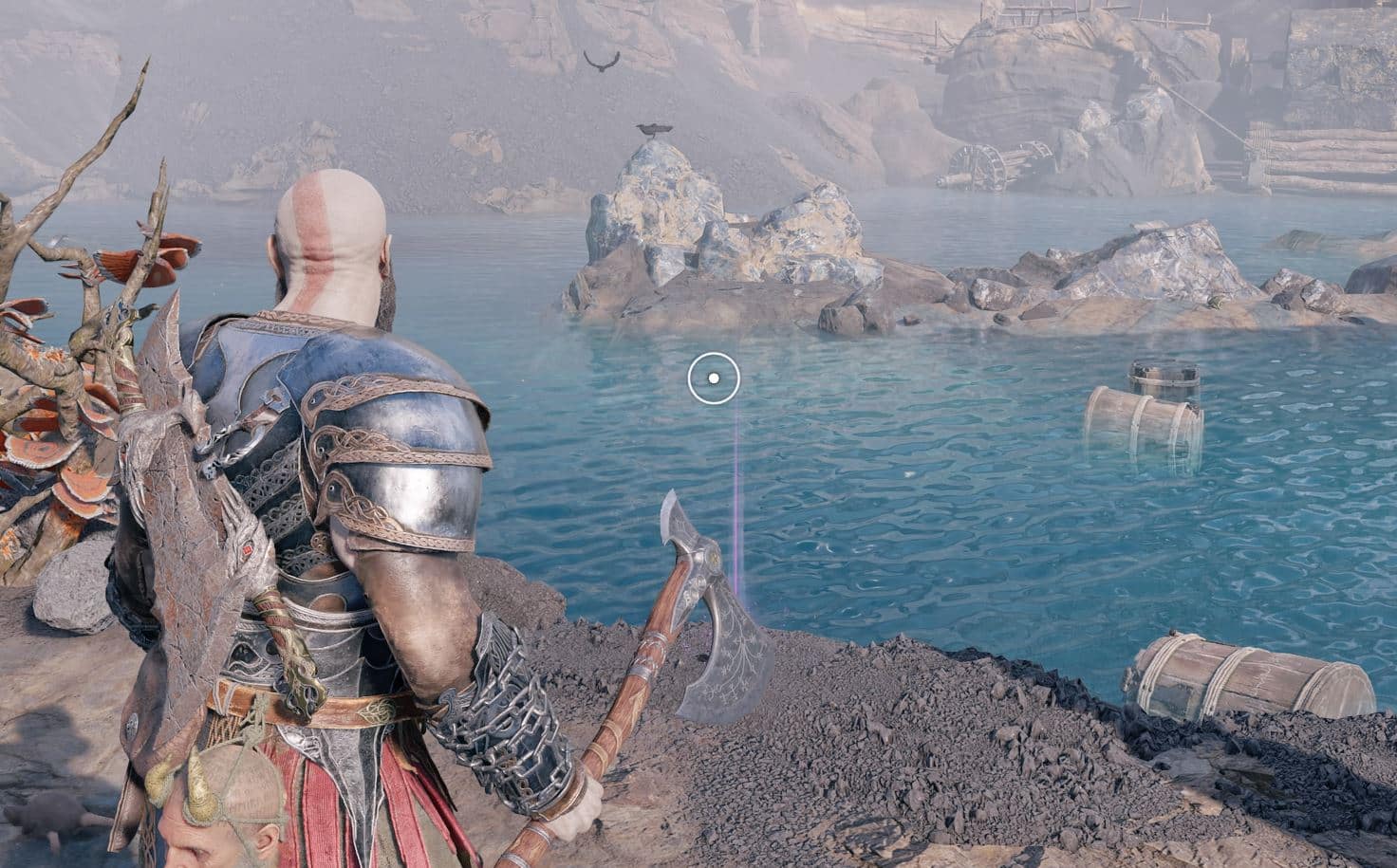 You can get the second artifact “Tool and Bang” in the Jarnsmida Pitmines after you get the lanterns from Sindri. Keep to the right, where you can spot a watercourse that you can pull yourself across. Once you do, the large crane will swing directly in your direction. Grab onto the large stone block and freeze the water with your axe. Walk back over the big stone to the new path and follow it to the artifact. 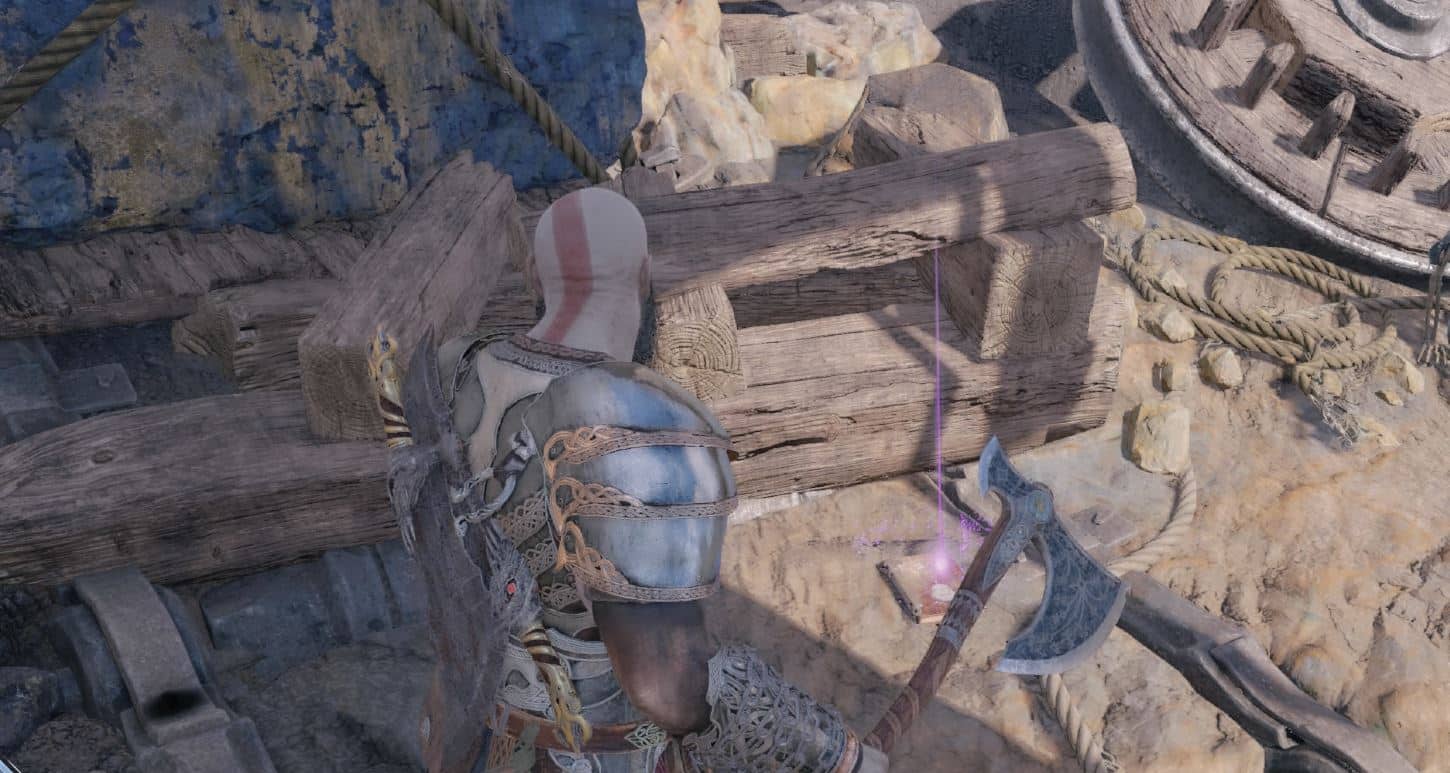 All Artifacts in the forge

You can also find an artifact in the forge, namely “Bari’s Grenade”. You can get to the forge after your first ride on the dwarven train. The way there is blocked by a cart, but there is another way to the right of it. There you can pull yourself up by the left ledge. Destroy the wooden scaffold and the artifact is yours. 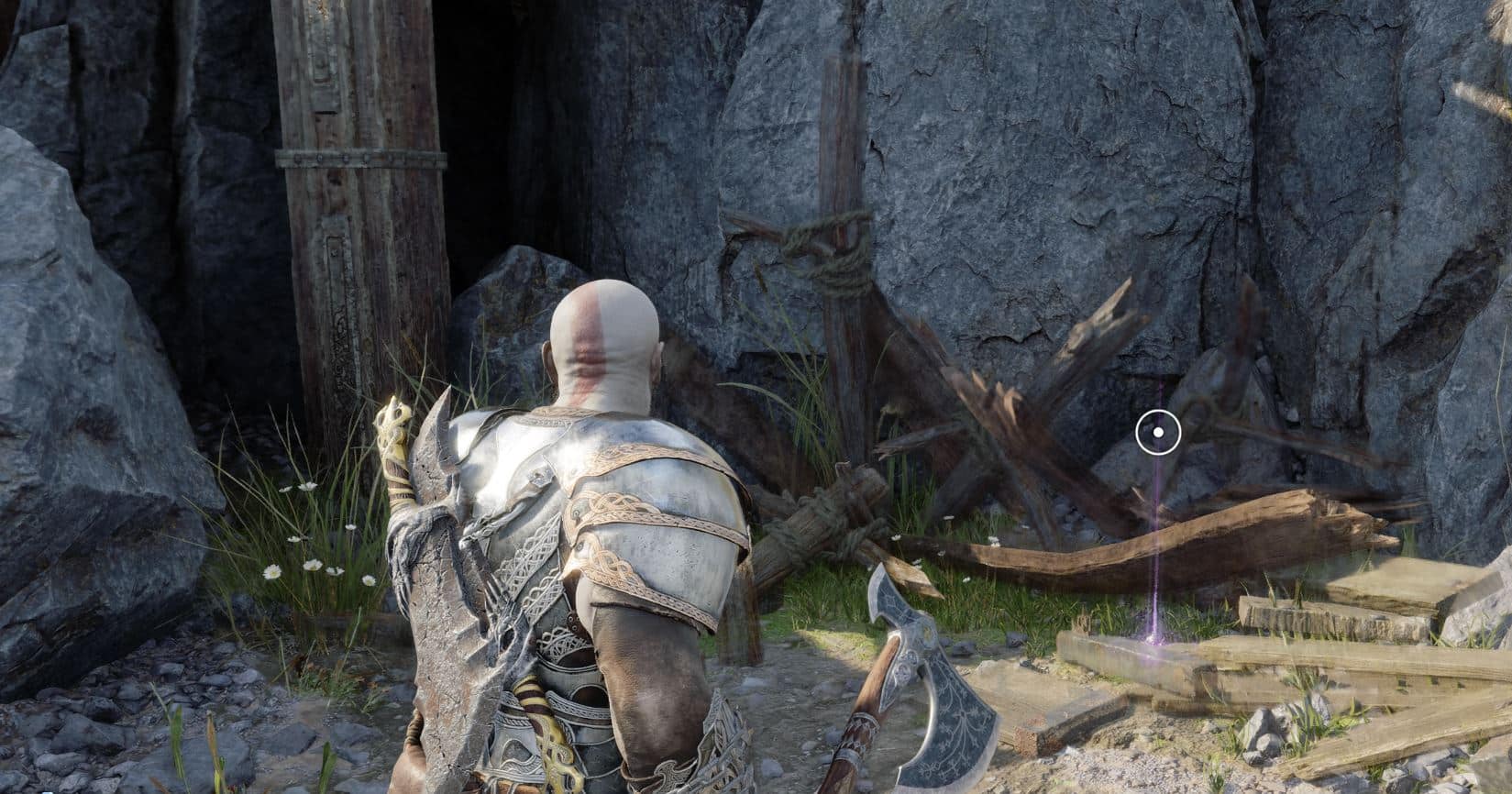 Those were all eleven artifacts in the first main area of God of War Ragnarök Svartalfheim.