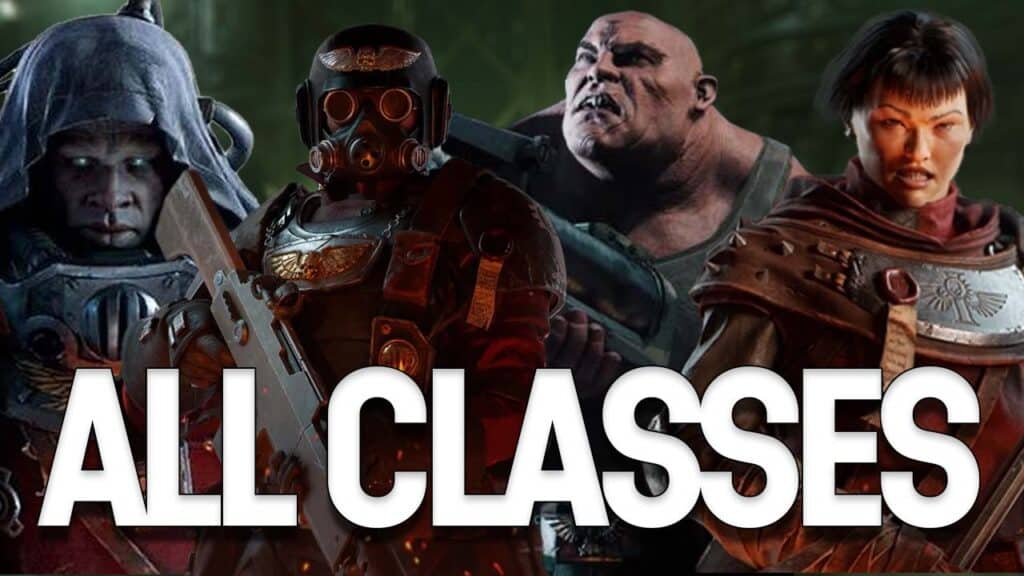 There are four different classes in Warhammer 40k: Darktide. We’ll tell you about the advantages and disadvantages of each character and for which playstyle they are suitable.

Here’s the deal: In Darktide there are the four classes – Zealot, Ogryn, Psyker, and Veteran. Each of them has its own advantages and disadvantages and is suitable for a certain playstyle. We’ll tell you how to find the perfect class for you.

These are all the Classes in Warhammer 40k: Darktide

In the following paragraphs, we will introduce you to all four classes in more detail. What abilities do the individual classes and characters have? What are their strengths and weaknesses and why should you play this class? But first, we’ll clarify the difference between characters in Vermintide and classes in Darktide.

The Zealot Class from Darktide

As a Zealot – or Zealot: Preacher – you play a lot in close combat, pushing into enemies and dealing out. Only for you to retreat just as quickly afterwards. This in-out tactic ensures that you usually have little life, but do quite a bit of damage due to certain bonuses.

Class Skill – Chastice the Wicked: As a preacher, you charge forward or towards a targeted enemy. As you do so, your toughness replenishes and increases the damage of the next melee hit by 25%. This ensures that the next hit is a guaranteed critical.

Iconic Abilities: Each class in Darktide has three iconic abilities. For the Zealot, these are as follows:

Aura Ability – Emperor’s Will: The Aura Ability mostly helps you and your party. It grants +7 toughness damage reduction to you and nearby players.

That’s why you should play Zealot as a character: Do you love risk and prefer to pounce directly on opponents, and can keep a cool head despite having few lives? Then the Zealot class is just right for you. You’ll often be low on life, but you’ll dish it out pretty good and rely on being able to retreat and regenerate quickly.

The Ogryn Class from Darktide

As an Ogryn – the tank in Darktide – you mercilessly run over your opponents. As a huge mountain of flesh, you can withstand a lot and are always in the middle of the battle, but you also deal out a lot of damage to your opponents.

Class Skill – Bull Rush: You charge forward and push your enemies back, gaining 25% attack speed and 25% movement speed for 5 seconds.

Iconic Abilities: Each class in Darktide has three iconic abilities. For the Ogryn, these are as follows:

Aura Ability – Intimitating Prescence: The Aura Ability mostly helps you and your party. You and the players near you deal 10% more heavy melee damage.

That’s why you should play Ogryn as a character: Do you fancy the big guns or knives and want to take a lot of damage? Then Ogryn is just the character for you. You don’t want to mess with this big mountain of muscle made flesh. You can take a lot of punishment and simply run down your opponents with the special ability.

The Psyker Class from Darktide

As a Psyker – the sci-fi mage in Darktide – you’ll play both in ranged and melee combat. Special is his special ability that allows you to make your opponents’ brains boil and their heads burst.

Class Ability – Psykinetic’s Wrath: Each class has a main ability. With the Psyker, your threat level is reset and enemies in front of you are knocked back and start staggering.

Iconic Abilities: The Psyker has only two iconic abilities. For the Psyker, these are as follows:

Aura Ability – Kinetic Presence: The Aura Ability mostly helps you and your party. Players near you deal 10% more damage against elite enemies.

Special Ability – Brain Burst: The Psyker has the ability to target heads and deal a lot of damage. If you can do this long enough, even the enemy’s head can burst.

This is why you should play Psyker as a character: Want to perform as a sci-fi mage in both ranged and melee combat and watch your opponents’ brains melt and their heads pop? Then be sure to choose the Psyker as your character. This one does a lot of damage on a direct target, making it the perfect elite killer.

The Veteran Class from Darktide

As a veteran – the sharpshooter in Darktide – you play a lot in ranged combat and try to keep an overview of the battlefield. We’ll show you what abilities the sniper has and the advantages and disadvantages that come with them.

Class Ability – Volley Fire: Each class has a main ability. With the Veteran Sniper, you go into a ranged stance for 4 seconds and immediately equip your ranged weapon. Additionally, you designate nearby non-Ogryn elite and specialist enemies as priority targets. While in this stance, you deal 50% more ranged damage.

Iconic Abilities: The Veteran class in Darktide has only two iconic abilities. For the Veteran, these are as follows:

Aura Ability – Scavenger Hunt: You and nearby players will receive a small amount of ammo when one of you incapacitates an elite enemy.

That’s why you should play Veteran as your character: Do you love blowing enemies’ heads off from a distance while always keeping an eye on the battlefield? Then Veteran is just what you need, with its precise ranged weapons. But be careful not to get too far away from your group.