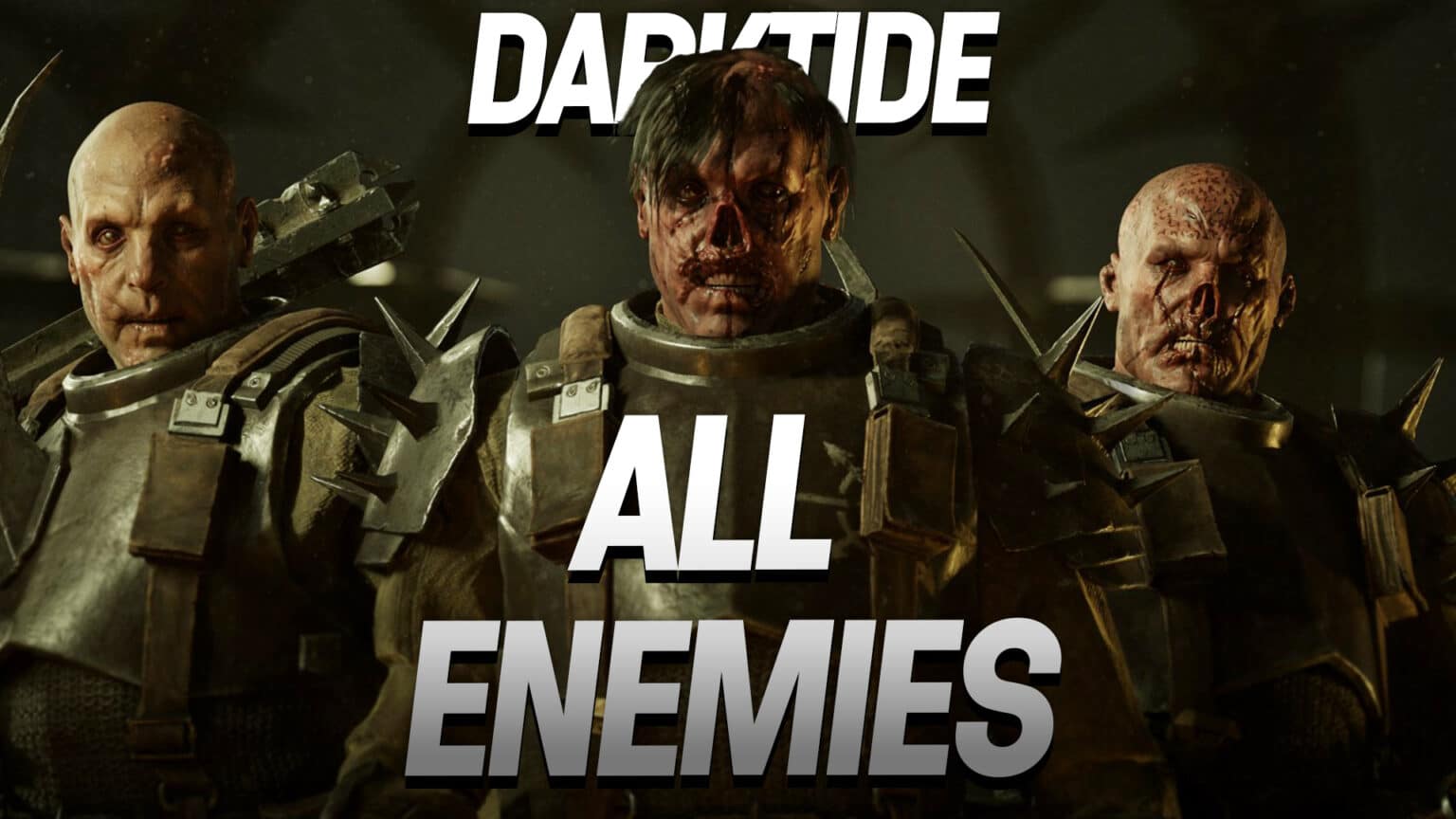 Warhammer 40k Darktide: An Overview of all Enemies

A few days ago, Warhammer 40k Darktide, the spiritual successor to the successful Vermintide, was released. In the hard-hitting first-person coop shooter, you will face many different types of enemies, so you know what to expect. We have the following list for you.

This is what it’s all about: In Darktide, you have to take on hordes of enemies. You have an arsenal of different weapons and classes at your disposal. However, many special opponents bring their special characteristics. We’ll show you all the different enemies from Warhammer 40k Darktide and tell you their strengths and weaknesses. With the information from the following guide, you are always well prepared.

These are the different Enemies in Warhammer 40k Darktide

There are four Enemie Types in Darktide. In addition to the normal horde of opponents, you will encounter incredible numbers. Are there also specialized opponents who have certain strengths. The sooner you can eliminate these enemies, the easier it will be to defeat the rest of the horde. In addition, there are also particularly strong elite enemies. These are even rarer than the specialized enemies, but they can withstand far more and quickly beat your group to a pulp.

The last and most dangerous of the enemies are the bosses. In each mission, you usually only encounter one or a maximum of two. Bounty missions have a specially named boss at the end of the level. You should use good teamwork here to emerge victorious from the fight against this overwhelming threat. The Horde in Warhammer 40k Darktide

In Darktide, the horde mostly consists of Poxwalkers, the weakest enemies in Warhammer 40k Darktide. Armed with a basic melee weapon, the Poxwalkers pose no threat as long as you fight small groups. However, Darktide keeps throwing large numbers of Poxwalkers at you, attacking from all directions at once, if possible. Here it is advisable to prepare for these hordes and intercept them in suitable narrow areas of the map.

On higher levels of difficulty, you’ll also have to deal with better-equipped Poxwalkers repeatedly. These are equipped with laser weapons and thus have a strong ranged attack. So you shouldn’t underestimate them. The specialized Enemies are dangerous

The specialized opponents are different enemies in Warhammer 40k Darktide, most of which are striking because of their appearance and stand out strongly from the horde. They have special abilities and a smarter AI and behave completely differently than the classic Poxwalkers you are used to from the hordes. Most specialized opponents can slow down the group or immobilize individual teammates.

Individually, they are not the greatest threat. However, they should be turned off quickly. Once a horde mixes with multiple specialized enemies, all hell will break loose for you and your party. So always keep an eye on these.

The Pox Hounds’ greatest strength is their speed. Your goal is to attack and pin down isolated members of the group. Once caught by a Pox Hound, the player cannot free himself without outside help and suffers regular damage. You can tell when a Pox Hound spawns by howling loudly. Once in range, it should be eliminated as soon as possible. Ideally, you don’t let him near your group at all.

Another opponent aims to take one of the party members out of combat. For this, he is equipped with a net launcher, with which he tries to catch a player in the group in a net. The trapper doesn’t make much noise and tries to sneak up on the group quietly, just waiting for the right moment to attack. If the attempt fails, he quickly tries to get under cover again and waits for a new chance. Unlike the Pox Hound, the net does not damage the player but should be freed quickly. Otherwise, it will become fodder for the horde.

Armed with a powerful shotgun, the Scab Shotgunner is particularly deadly if it makes it to your party. So once you or a player in your party spots a Scab Shotgunner, the focus should be on taking it out at range. Once he gets close, he can send several players to the afterlife with just a few shots. Especially in connection with a Horde attack and, for example, a Trapper, a fight against the Scab Shotgunner can quickly escalate.

Unlike the Scab Shotgunner, the Scab Gunner is armed with an automatic rifle. This allows him to deal a lot of damage from a long distance. It aims to take players from your group under continuous fire and thus force them to take cover. The easiest way to take him out is with a well-aimed shot from a sniper rifle. You can also attack him from the side if he has another player in focus.

As the name suggests, Dreg Tox Flamers are equipped with a heavy flamethrower. This allows you to deal high damage over a large area. In addition, the area under fire from a Dreg Tox Flamer continues to burn for longer. This means that you and your group cannot enter it for long. This quickly becomes a big problem, especially in small and narrow areas. So eliminate this threat as soon as possible.

If you see an enemy charging toward a player in your party at high speed, it’s probably a mutant. These enemies attempt to charge a player, then grab him and smash the ground with their defenseless bodies. When they’re done with that, they throw your party member somewhere. This process does a lot of damage, and it often leaves the wounded player in a real predicament, surrounded by more enemies. Even if the mutant is not that easy to defeat because it can withstand a lot, your group should fire at it with all guns before it reaches you.

Like the Mutant, the Pox Burster will run into your party only to blow itself up there. This attack will cause the Pox Burster to die, but it will significantly damage all players near its blast. Again, a player should attempt to take out the Pox Burster with an aimed shot from a sniper rifle. If this is not possible, spread out as far as possible so that not all players in the group are affected by the damage.

Now, if you expected Warhammer 40k Darktide to throw another opponent at you who blows himself up, luckily, you’re wrong. Although the Scab Bomber looks exactly like it, it uses the incendiary grenades attached to its armor to throw them at you and your party. Each grenade leaves behind a fire carpet on the impact, preventing you from moving freely. Therefore, the focus should also be placed on destroying the Scab Bomber, especially in narrow areas.

The final specialized opponent is the Scab, armed with a sniper rifle. Now at the latest, your sniper in the team should wake up and turn off the Scab Sniper before it comes into play. If he gets too close to your group, he will quickly run away to deal high damage from a safe distance. However, thanks to the laser attached to his rifle, you can quickly see where the Scab Sniper is. He only needs a few shots to take one of your party members or you out of the game. 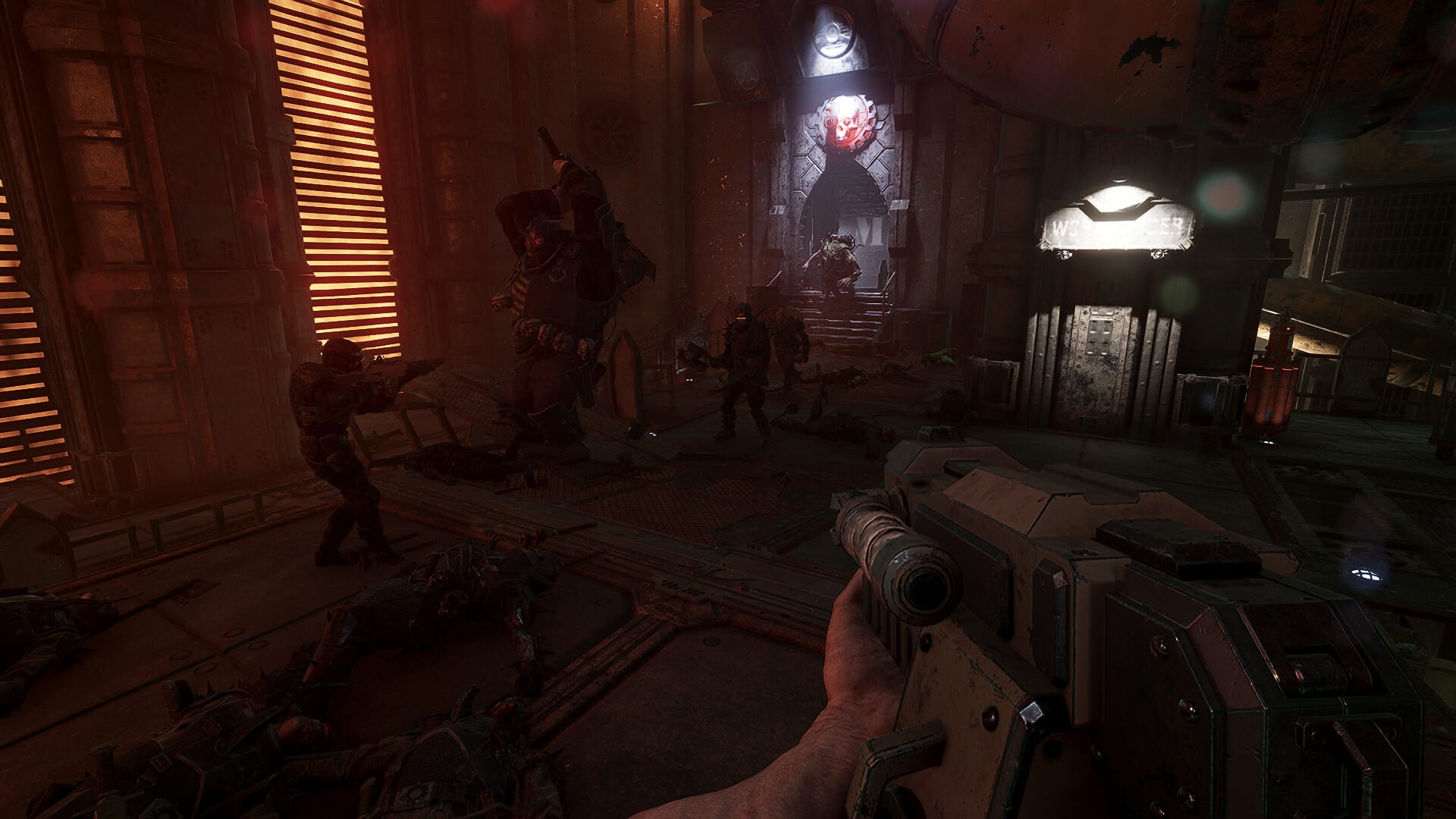 The elite enemies are mostly strong and well-armored melee fighters. With a single exception, all elite opponents in your group try to heat enemies with strong melee attacks. They rely on excellent armor, which you can only send down quickly and reliably with armor-piercing projectiles. Especially on higher difficulties, the game will throw whole groups of elite opponents at you.

Heavily armored and armed with a large hammer, the Mauler is one of the elite foes that are relatively common. However, the Mauler can only move slowly due to its good armor, making it easier to dodge its attacks. If you see the Mauler raising his hammer overhead to swing for a powerful attack, don’t stand in his reach. This attack deals massive damage when it hits you. Aimed headshots, ideally with armor-piercing bullets, are the easiest way to take out the Mauler.

Like the Mauler, the Crusher is equipped with heavy armor and a large hammer. That’s why you should also consider everything that you already had to consider with Mauler. Because he’s a bit taller, he’s also more sluggish. As long as you’re only facing one crusher, you can easily dodge his attacks. However, if you face a fight with a group of crushers in a narrow passage, you must proceed with extreme caution.

If you run into an ogryn with a large shield and a one-handed melee weapon, it’s probably a bulwark. Its size and shield make it incredibly resilient. Don’t try to mess with a bulwark alone. It’s much easier if one player in your group lets the bulwark attack them, and the rest runs around it to attack it from behind.

He is the only exception to the elite enemies in Warhammer 40k Darktide, as he focuses on ranged combat rather than pounding you with giant hammers. Reapers are ogryns armed with huge automatic rifles. If you keep him at a distance, he will keep firing at you and your party until you all say hell or he is defeated. So the whole group should work as quickly as possible to eliminate this monster. The strongest enemies you can face in Darktide are the bosses. In most cases, as already mentioned, there is only one boss per level, so you will never have to face a whole group of these nasty enemies. While it’s possible to defeat one of the bosses alone, we don’t recommend it. If you make a small mistake, the boss will wipe the floor with you.

The Plague Ogryn is one of the two current bosses in Darktide. He is probably the biggest opponent in the game and deals very high damage, especially in close combat. Due to its size, however, it moves rather slowly, so it is relatively easy to dodge its attacks. But before you effectively dodge the plague ogryns attacks, you should first look at the different attacks from a certain distance. However, with little teamwork, defeating the plague beast isn’t too difficult.

Using a mix of melee and ranged attacks, the Scab Captain can almost always damage your party. On top of that, he also has an energy shield, which largely protects him from incoming damage. When the shield takes a certain amount of damage, it will explode, knocking all players back. It regenerates in a few seconds. Again, you can use the trick you learned from the Reaper. As long as the Scab Captain is engaged in melee combat, he won’t shoot at the other members of your squad.

These were all enemies currently available in Warhammer 40k Darktide. Have you already pre-ordered the game, and can you already gamble, or are you waiting for the right release? Write it to us in the comments!

Would you like to join our community and discuss Warhammer 40,000 Darktide? Then join our new Discord server. We look forward to seeing you!