The 10 best mobile role-playing games for Android and iOS

Top role-playing games on the go will no longer be in short supply in 2021, regardless of whether they are on the Android phone or the iPhone. Sometimes you don’t even have to pay anything for these things, because many indie developers finance their software pearls through advertising.

Do you hate advertising? No problem either. Because even for small lump sums, you can now get desktop hits from relevant AAA publishers, as increasingly powerful smartphones can naturally increase the hunger for resources of the mobile phone ports.

In the meantime, our constant companions are doing enough to even throw immersive role-play experiences on the display – despite the relatively small screen. We are now proving this with what we consider to be the ten best mobile RPGs.

Our top 10 role-playing games for Android and iOS

This is how we sorted our top 10: The following titles are in the price range from 0 euros to full mobile price; the vast majority of premium games only cost you a few coins. For the placements, it is important that they represent the taste of the editorial team. Nevertheless, we also made sure to fill the ranks realistically. In this sense: have fun! 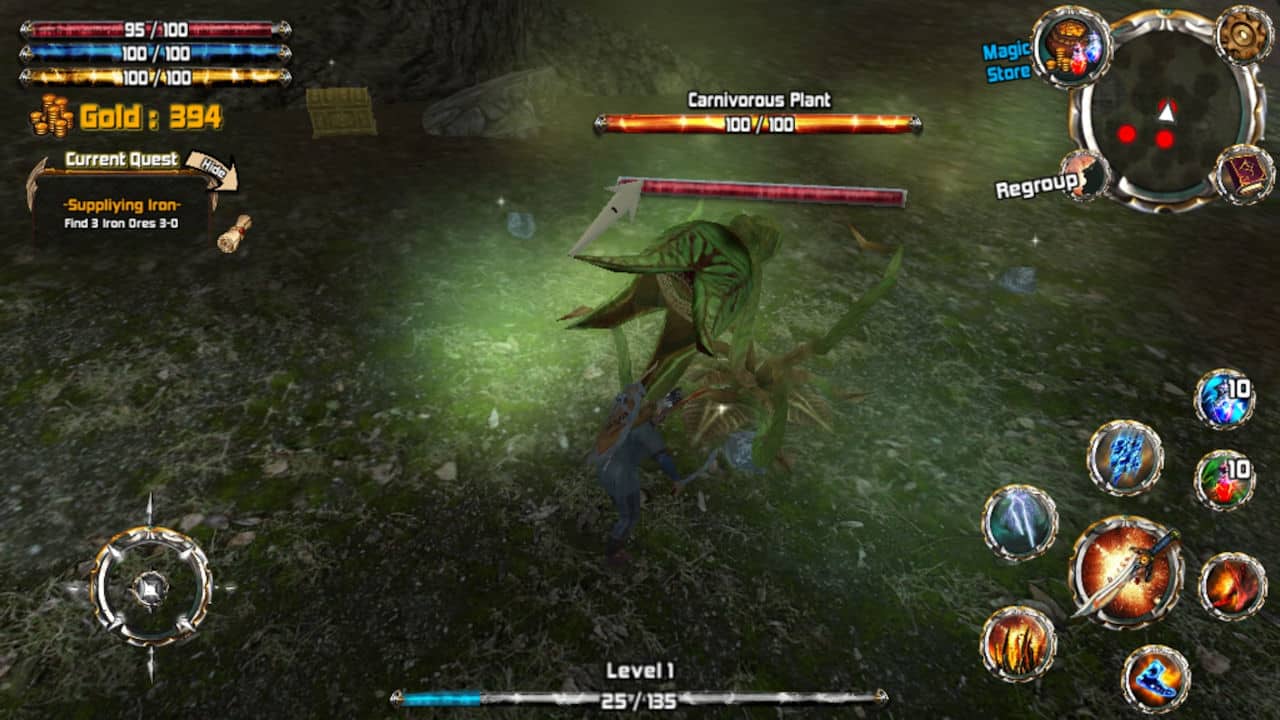 That’s what it’s about: An open-world role-playing game with real-time battles for smartphones? Kingdom Quest is exactly that. From the third-person perspective, you control an elite fighter who is on a royal mission to protect an entire empire from an ancient curse. From the automap to destructible objects, there is practically everything for the adventurer’s heart. With 117 main quests and ten sidequest series, your mission will not be fulfilled that quickly.

This is particularly great: Kingdom Quest is based on well-known older PC role-playing games and is accordingly complex. The main character has eight status values and ten upgradeable special skills.

That’s rather stupid: Kingdom Quest is not necessarily blessed with smooth performance, completely flawless controls, and beautiful graphics. In addition, there are no different character classes. That’s what it’s about: Anyone who likes isometrically displayed point & click role-playing games in the manner of Baldur’s Gate will get new hack & slash fodder with Exiled Kingdoms. For you, this is about taking on an inheritance that will lead you into a crumbled kingdom of power struggles and dark legends. The enormously extensive RPG lives up to its old-school standards and allows all character traits to influence the game world as well as the NPCs living in it.

This is particularly great: Exiled Kingdoms easily has the scope of many desktop role-playing games, which is why it is also available for the PC. The open world is divided into 135 areas where you can meet more than 300 characters. The large arsenal of enemies can be countered with an impressive 70 skills and four character classes. The controls are pretty handy.

That’s rather stupid: in order to enjoy Exiled Kingdoms, you have to be able to accept hopelessly outdated graphics. 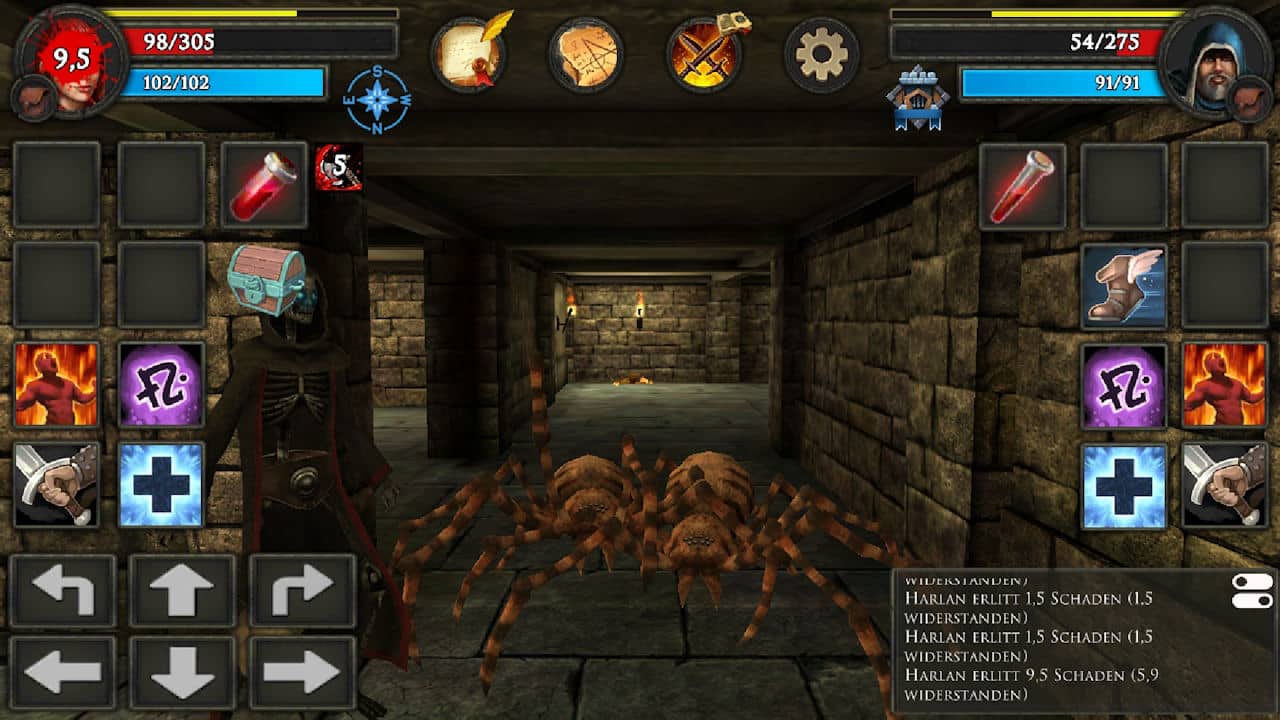 That’s what it’s all about: Since the Legend of Grimrock at the latest, certain primeval creatures of the role-playing game genre, the dungeon crawlers, have been back in the conversation. Moonshades belongs to the classic division of first-person crawlers with grid movements and tactical party real-time battles; all of this within a very busy underground world with traders, smiths, and quest NPCs. Oh, and of course with all sorts of traps. The story plays a minor role here, but it’s pretty interesting to rummage through the lore or follow the personal stories of failed adventurers. There is only one character class that can be played, but in principle it is universal.

This is particularly great: Moonshades has been designed with great attention to detail and is one of the best games of its kind on the smartphone. Thousands of upgradeable weapons and items, frequently changing scenarios and various types of magic ensure a lot of variety underground.

That’s rather stupid: Anyone who is familiar with dungeon crawlers knows that they are not stingy with crisp puzzles. Accordingly, one or the other ends up in a dead-end here. 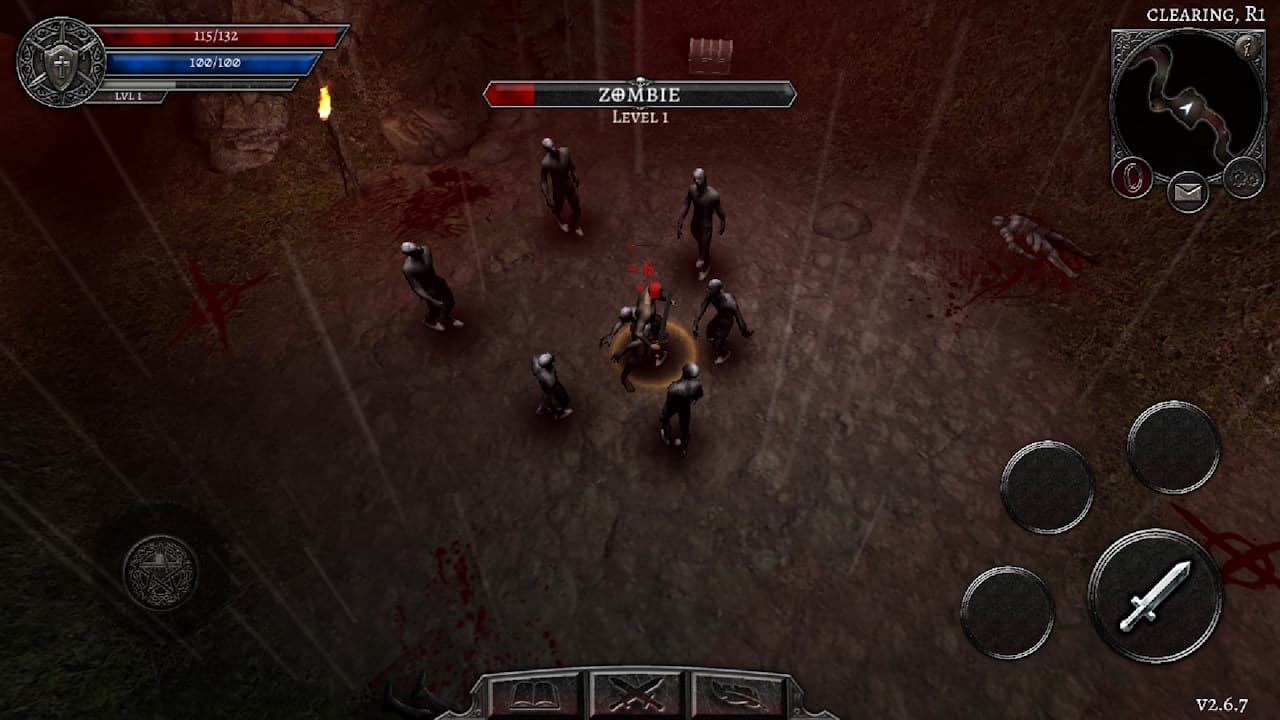 That’s what it’s about: AnimA acts and plays like a bastard of dark souls and isometric old-school RPGs like Sacred. As with the latter, the focus is on fast and fluid hack & slash battles, which are only fought in extremely dark, sometimes hell-like locations. AnimA offers mixed classes, more than 60 different skills, skill trees, ten levels of difficulty, and several game modes. With a total of 100, the range of in-game items is not totally amazing; But there are set effects and cool legendary armor.

This is particularly great: AnimA is convincing in almost all respects, but it stands out particularly due to its very good playability and fast action.

That’s rather stupid: where is the gripping story with which AnimA could have held its own against the heavyweights of the genre? In any case, it is not in the game. 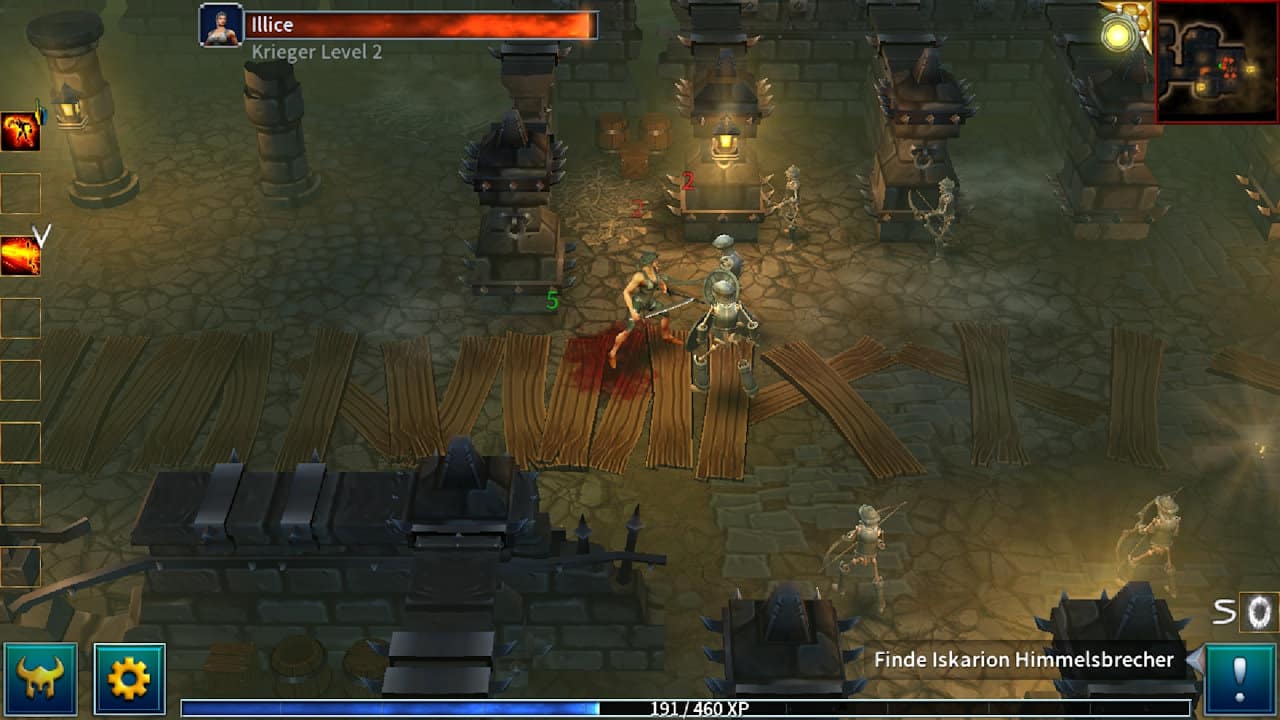 That’s what it’s about: The developers are promoting Eternium as a hack & slash role-playing game specially designed for smartphones – and don’t lie about it. In a great iso-optic, you fight your way through torchlight-style through droves of fantasy critters, all imaginable biomes on earth and on the moon serve as a backdrop. There are three classes with 20 skills each available, with the mercenary fighting with firearms in contrast to the warrior and magician. Similar to MMOs, characters can be trained to become tanks or other skills. The story is more functional with the hunt for the ultimate villain, but it has a lot of funny moments.

This is especially great: Eternium has one of the most convincing art styles in the mobile game segment and is also brilliant from a technical point of view. In addition, the title stands out from most of its competitor’s thanks to the excellent flow of the game.

That’s rather stupid: If you struggle with the limited skill slots, want to open every treasure chest, and even want to enjoy every corner of the game, you will have to invest some money. 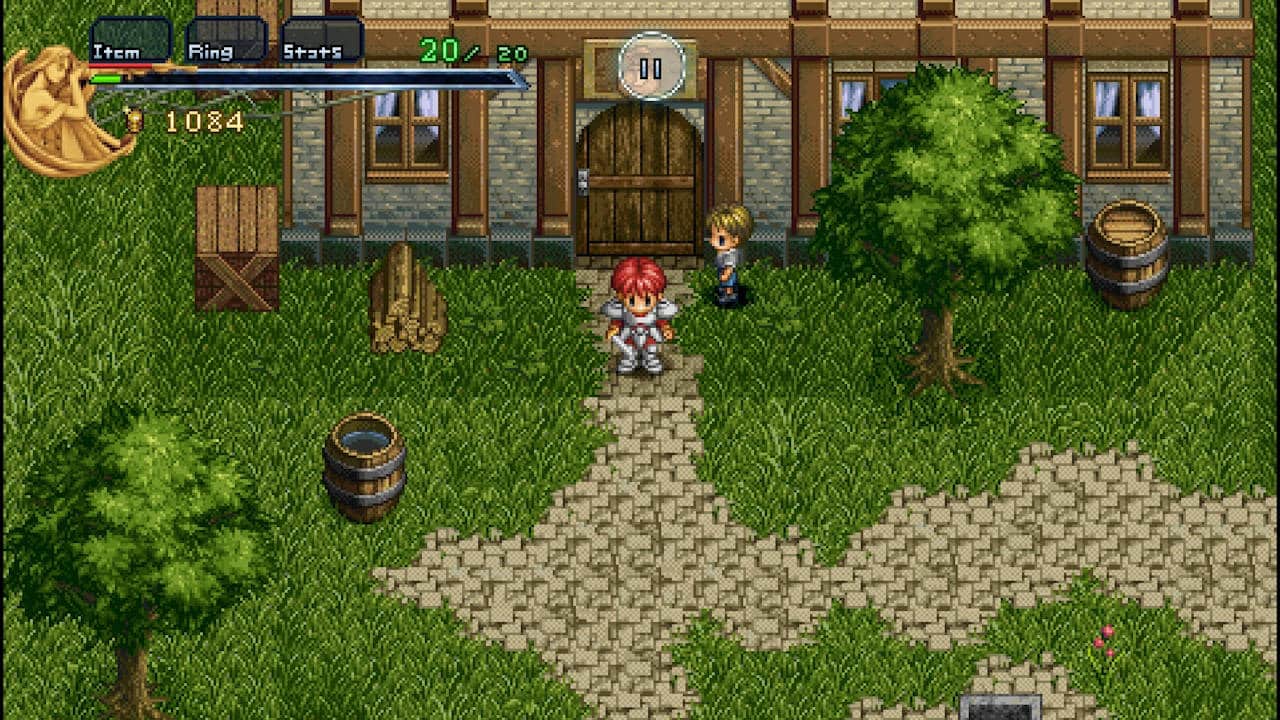 That’s what it’s all about: Ys is known to come from Nihon Falcom, the JRPG specialists behind the great Legend of Heroes series. Ys Chronicles is a complete remake of the first Ys game from the late 80s, while maintaining the top-down perspective typical of the time. The story of a young swordsman who selflessly travels through a land suddenly infested by monsters is of course standard nowadays, but it turns out to be quite interesting. If you like classic Japanese role-playing games, you can never go wrong with Ys, but you should take a closer look at the “bump” combat system before buying.

This is particularly great: Ys Chronicles puts an interesting game world at your feet with lots of NPC conversations and mobile-friendly fights. This remake hardly shows that the game is 34 years old.

That’s rather stupid: the German translation is anything but error-free. It is therefore advisable to change the language to English. 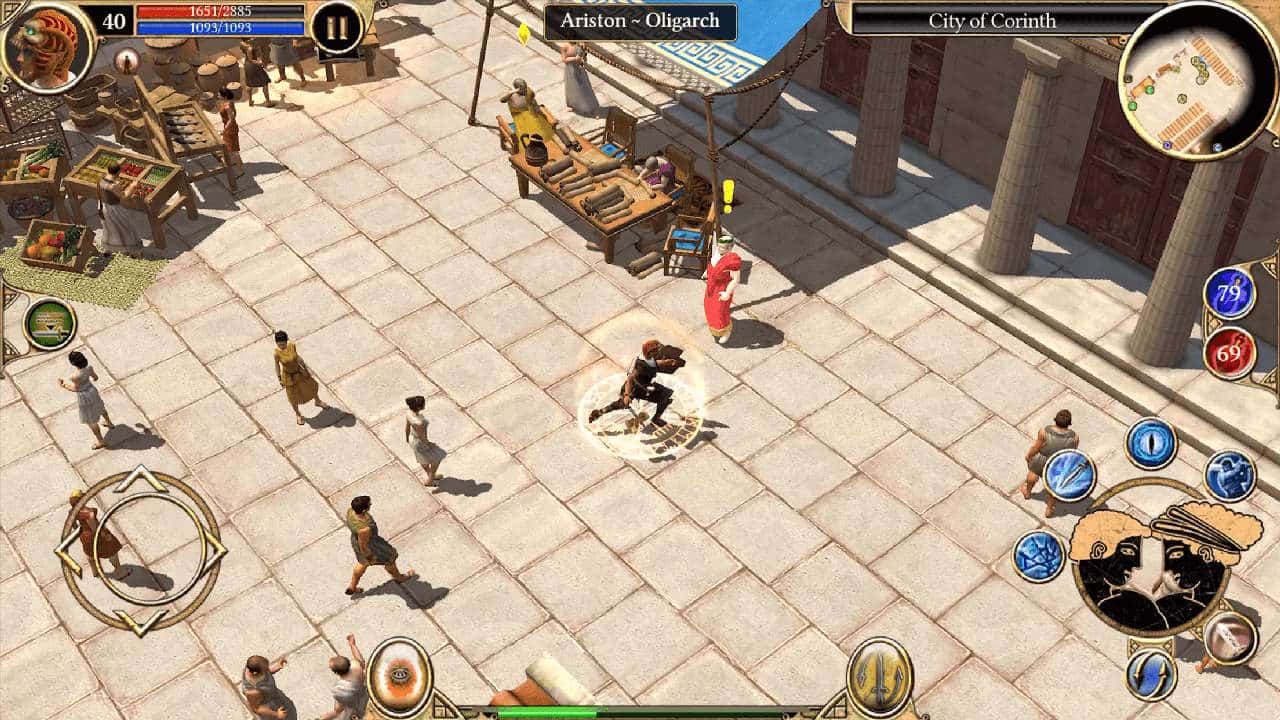 That’s what it’s about: In this hack & slash known from the PC, your task is to prevent the titans from reclaiming the earth. To do this, you have to neutralize numerous Telkines and – of course – mostly complete entertaining quests. Titan Quest uses an isometric view, the point and click controls have been replaced by a typical digital pad, with the UI also responding to touch. Otherwise, it is the original desktop version with around 60 hours of game time, 30 character classes, and 150 hero skills.

This is particularly great: Even today, the Titan Quest, which was first published in 2006, still inspirng with exciting, ancient settings (Greece, Egypt, the Orient) and impressive mythological creatures. Even 15 years later, there is hardly anything to complain about when it comes to technology.

That’s rather stupid: Just like many other genre comrades, Titan Quest focuses primarily on the battlefield. Don’t expect a deep story here. 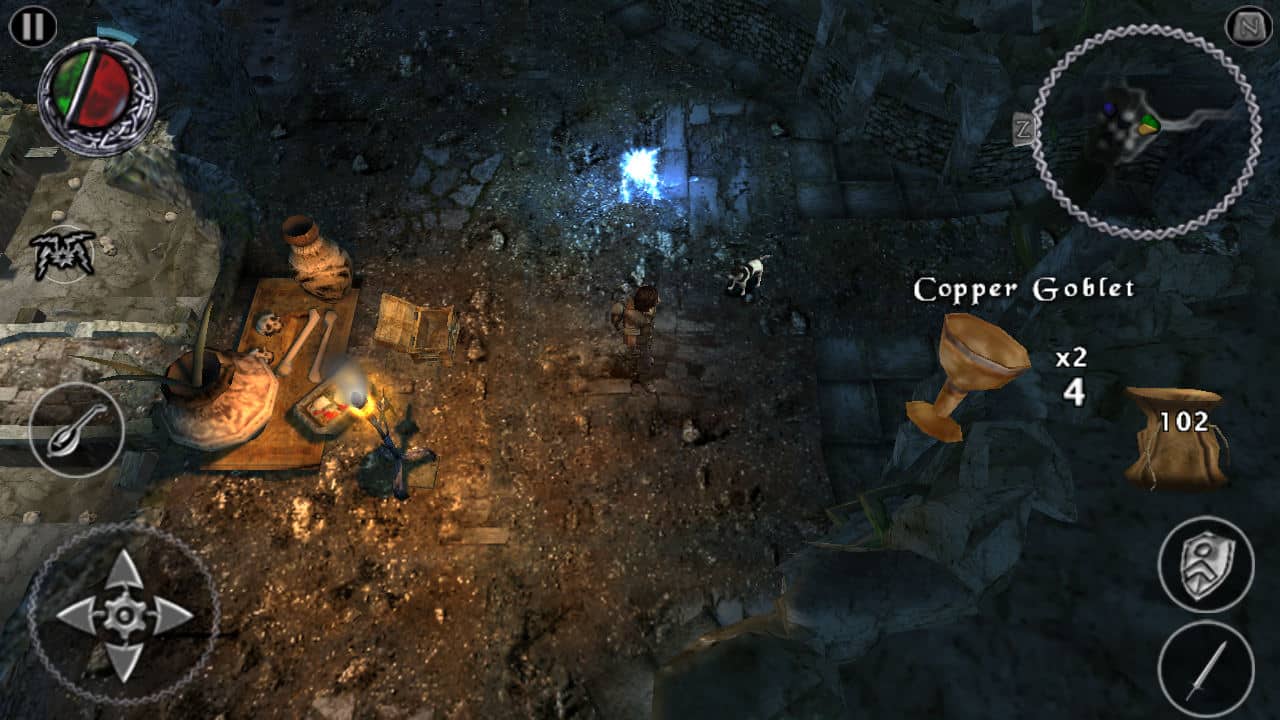 That’s what it’s about: If you count more than 40 Lenze, you will most likely be familiar with the name The Bard’s Tale. It is one of the most famous RPG series of the 80s, which has been reinterpreted here for smartphones. You can prepare yourself for an action RPG, usually presented in a top-down perspective, with a very humorous story, female breasts, and animal companions. Both a digital pad and touch controls serve as control elements. The scope of the game is quite decent with around 50 types of opponents, 16 support characters, and 150 weapons, and the game world also gets everything out of the typical medieval setting.

This is particularly great: If you’ve had a bad day or just want to have a lot of fun again, The Bard’s Tale has always been a good choice. Laughs are guaranteed.

That is rather stupid: The selected camera perspective is not always optimal, especially in forests, as objects can obscure the view. It looks like support for the game has been discontinued, although there are still a few problems with non-working saves. 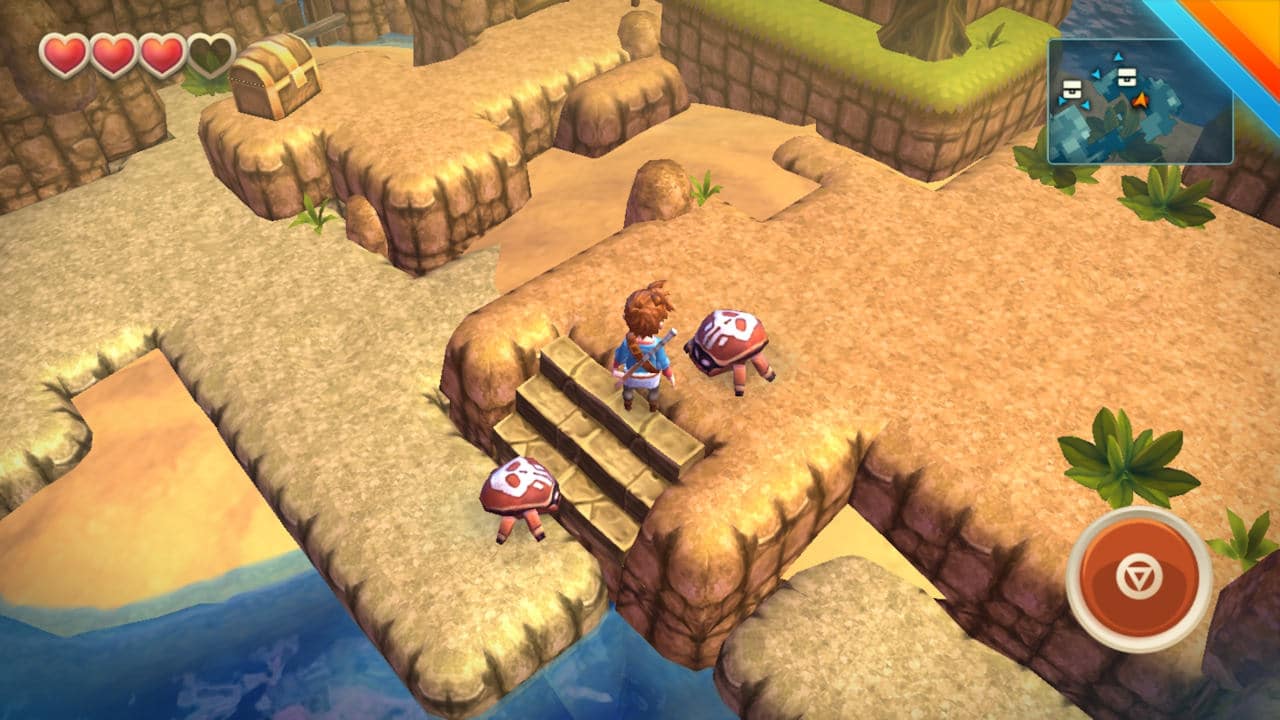 That’s what it’s about: Okay, Oceanhorn is actually an action-adventure. But it is perhaps the best Zelda clone to date, which is why we want to make an exception here. In the role of a youngster, you travel a wonderfully diverse world by boat to get to the bottom of the secret of your missing father. On the game’s countless islands, designed with love, you will encounter platforming elements as well as interesting combination puzzles and simple but skillful real-time battles. As in the larger model, swords, shields, bows, and bombs serve as weapons, and you will gradually receive special equipment that, for example, opens up impassable terrain.

This is particularly great: Although Oceanhorn copies the classic Zelda games in almost brazen ways, the number doesn’t feel like a soulless clone at all. The story, optics, level, and puzzle design are all on a very high level.

That’s rather stupid: The free access is a fraudulent label. You can only play a very small part of Oceanhorn for free; then you have to buy the full version in-game. 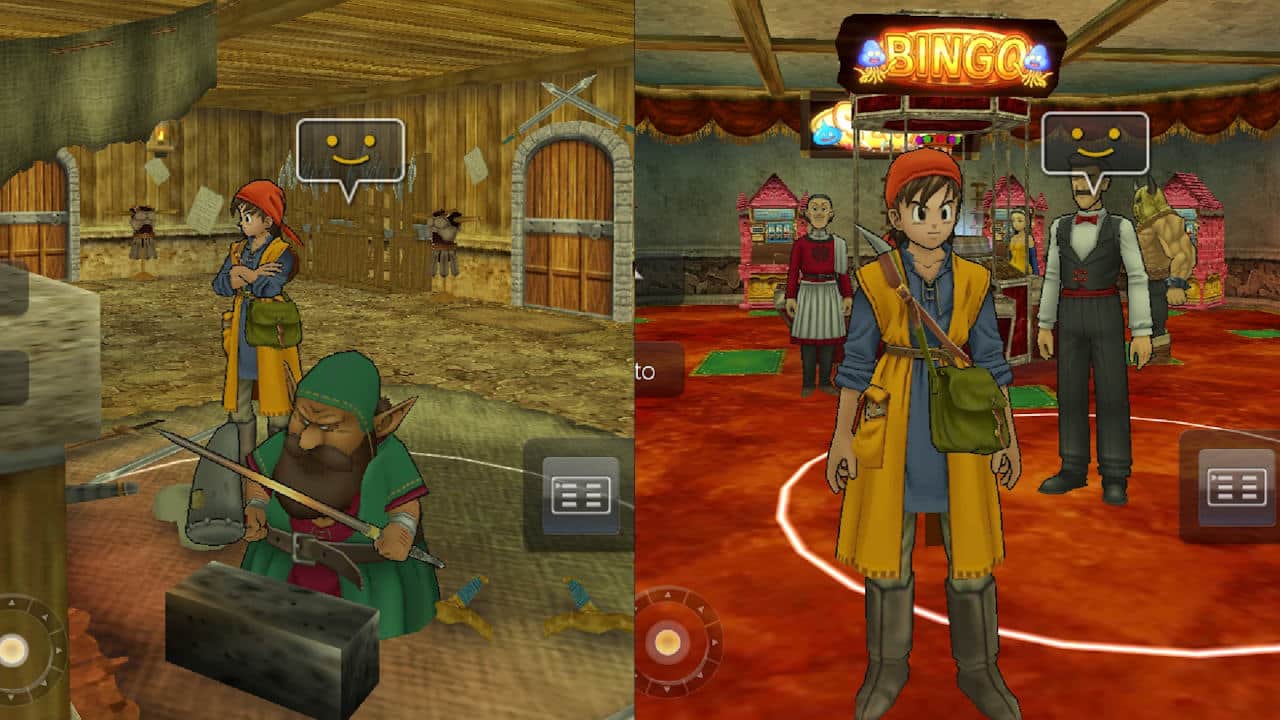 That’s what it’s all about: For those familiar with the JRPG division, our number one should not come as a surprise. The ravages of time cannot harm the emotional as well as a funny story about the journey of an unequal heroic quintet, not even after 17 years.

The focus of Dragon Quest VIII is King Trode, who was turned into a bizarre toad (actually a troll) by the nasty magician Dhoulmagus. His daughter Medea is no better off either – the traveling villain turned her into a horse. In order to face Dhoulmagus, you have to cross a large, open-world with a steadily growing group. In addition to tons of quests and often very touching substories, it houses thousands of round-the-clock battles against well-designed opponents. The former PS2 skirmishes work expectedly well on the smartphone, only the sight of the spartan, almost “torn” UI disturbs the overall impression.

This is especially great: Dragon Quest VIII tells one of the greatest stories in the JRPG space and easily provides 60-80 hours of entertainment. Thanks to a variety of character skills, weapons (boomerangs, whips, axes, swords), and a wide variety of elemental magic, round-robin battles are a lot of fun.

That’s rather stupid: If something can be stupid about Dragon Quest VIII, then at most the old school-typical high grind factor. Depending on the style of play, the next big boss may have to level up extensively.

So, did you find the perfect mobile RPG for you on our list? 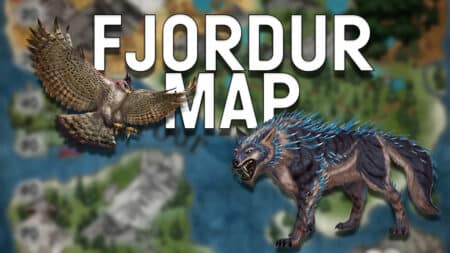