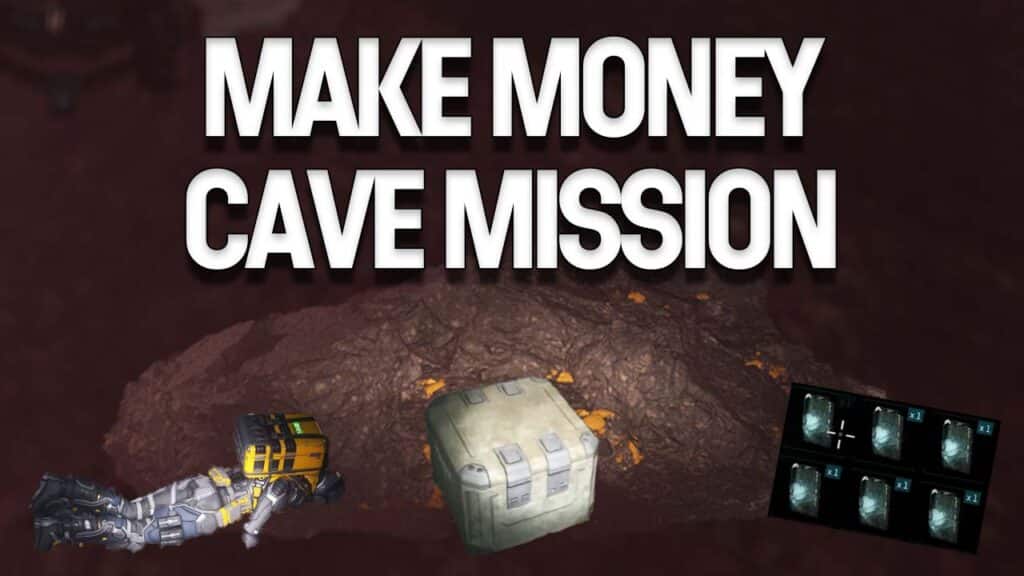 In Star Citizen, you’ll want to earn big money quickly, and we’ll show you how to make a lot of money with cave missions, even as a beginner, to buy your first ships or expansions.

What it’s about: Are you new to the game or tired of playing delivery missions all the time? Then we might have the solution for you. We’ll show you how you can quickly earn money with cave missions, so you can buy, for example, new ships faster.

Hurston as Example: Version 3.17.3 is the current version of Star Citizen. We will adjust this guide accordingly if there are any major changes in the future. At the moment, we know so far that this method of earning money works mainly in the Crusader and Hurston systems. We can’t say if this method also works in the other systems. We will present this guide with an example. To start, we are on Everus Harbor, the station above Hurston.

How to Earn Money as a Beginner through Cave Missions

We want to show you how you can quickly get a lot of money in Star Citizen, even as a beginner. At the beginning, you might have an Aurora MR or an Avenger Titan as your starter ship. With this, you can do small tasks like delivery or investigation missions, but that gets boring quickly, and you hardly earn enough aUEC.

Another way is to hunt down and eliminate enemies in underground caves. The missions are not only better paid at 25,000 to 30,000 aUEC but also offer the possibility to earn about 50,000 to 130,000 aUEC extra money.

For this, we search in the caves for the ore Dolivine and sell this afterward. Now we’ll tell you how to unlock these missions and solve them.

How to Get the right Cave Missions

To get started, you first have to fulfill a few requirements. In the Delphi app of your MobiGlas you can find your reputation with different factions and companies. If you want to start in Hurston, as we did, the Bounty Hunters Guild and the Hurston Dynamics company are particularly relevant for you.

To unlock the missions, you must first be level 2 in the Bounty Hunters Guild and the company in that system. If you don’t play in Hurston, here is a listing of the companies that give you the quests for the other systems:

First, you must play the Tracker Training Permit Certification quest to get more Bounty Hunter quests. After that, play missions from Hurston Security (or the company in your system) until you get a quest with the abbreviation “?RT or the name “Evict Illegal Occupants”.

The quests you do until then are ship battles. Just always neutralize the target. Be careful not to accept quests that involve PvP, though, as they may be too difficult. You can recognize PvE quests because the NPC targets always have a first and last name.

Tip: In the Medical Centre, set your spawn point to the station you want to wake up in if you die. Also, we recommend you do the ship battles without armor and only with your ship. This way, if you die, you won’t lose valuable equipment, and in the current state, you don’t need a helmet or anything like that to fly in your ship.

These are the right Missions

If you are level 2, you will get access to better quests. As a rule, you only need to play 2-3 missions, and then you will be shown either the quest “Evict Illegal Occupants” or a quest with the abbreviation ?RT.

The “Evict Illegal Occupants” mission is always in a cave, and you can accept it without hesitation. For the ?RT missions, it is important to read the description. If it says “Cave” then it is the right mission. For the quests alone, you get between 25,000 and 30,000 aUEC when you complete them, which is three times the amount of a simple delivery mission.

Tip: It is recommended that you also accept the “A Call to Arms” mission. You can find it under Mercenary. Every time you kill an enemy, you get a bonus of 500 aUEC. This means that in a cave with 12 enemies, you have already earned an extra 6,000 aUEC.

This is the right Equipment for Cave Missions

So if you have the right missions, you must equip yourself wisely. First of all, it doesn’t matter what ship you fly. It’s only there to get you to your destination. You don’t have to fight with it, and you don’t need a big storage room.

Otherwise, the equipment is quite manageable. We have compiled a list of essential items that you will need:

Whether you still put on an arm or leg armor is up to you. For one thing, you can often find these armor pieces in the caves; for another, the AI is not so good that you must be afraid of dying. You don’t need very good weapons, either. You can find some of them among the enemies.

How to Solve the Cave Missions

Now let’s start the actual mission. So activate one of the above quests and track it. In Hurston, the caves should be either on the planet Hurston or in a cave on Aberdeen. Call your ship, grab your gear, and head to the cave.

The Approach to the Cave

So you took off from the station and flew as far as possible to the destination. We recommend that you use Quantum Drive for this. Most of the time, you will end up 300-400 kilometers from the target. To avoid flying the remaining kilometers, you can use a trick:

Tip: Note that the quest marker disappears from about 5 kilometers to the target. Aim exactly at the target beforehand and fly the remaining kilometers straight ahead. Then you’ll head straight for the cave entrance.

How to Find Dolivine in Caves

So land in front of the cave and get out. Now you can enter the cave. Use your flashlight (key: T) regularly not to miss anything. Also, watch out for light coming from the enemies. Eliminate all the enemies you find. The caves have individual rooms where enemies usually spawn in the same places. After playing a few missions, you will eventually know how the caves are laid out and where the enemies will be.

Tip: If you activate the Armor filter in your backpack, you can transfer the Dolivine from the enemy to your inventory more quickly.

The big difference in the money you can earn in the missions is due to crates that spawn randomly. In some places, small green crates can spawn that you can loot. In them, you can often find a lot of different materials, including Dolivine. If you’re lucky, you’ll find several of these containers at once, allowing you to increase your yield even more. There are also white containers with armor and blue boxes for medicine.

Besides the boxes shown, there are also weapon boxes that contain special weapons. You can then attach these to your backpack and take them with you.

When you reach the end of the cave, you can walk back to the ship or be smart and log out to the menu and log back in. Your inventory will remain intact, and you’ll be right back at the station you were at last.

Tip: We recommend moving the Dolivine from your backpack to your station inventory first. Some of the backpacks are otherwise broken. This takes a little time, but you don’t have to buy new backpacks regularly.

Once at the station, whether by re-logging or flying back, you must go to an admin center. You can go to a terminal and select “Sell” at the top center. On the left, you can select the “source” you want to sell from. For us, it’s Everus Harbor, which is the station inventory.

You then simply select the Dolivine and click Sell at the bottom. In our example, we earned about 117,000 aUEC in one run.

You want to join our community and discuss about Star Citizen? Then join our Discord server or visit us on Facebook, we are looking forward to you!