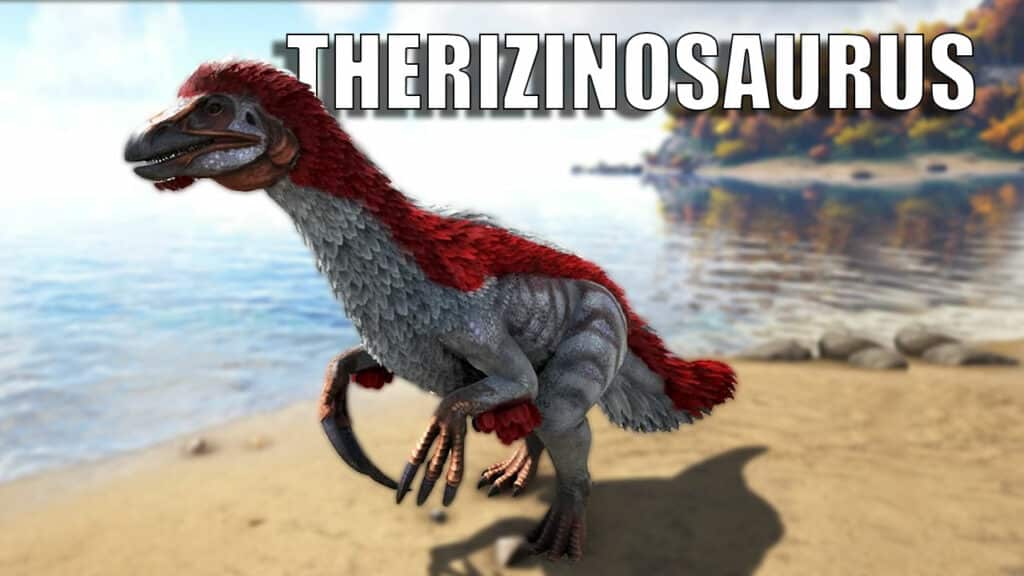 ARK: Survival Evolved: Therizinosaurus – How to Tame, Feed and Breed!

To quickly farm wood or fiber, the best choice is the Therizinosaurus in Ark: Suvival Evolved, Therizino for short. With its long claws, however, it is also possible to break through any armor or protection of the opponent. The Therizino is therefore a multi-talent.

Find out everything you need to know about the herbivore in our Therizinosaurus guide. But also how to catch him, tame him, feed him, and breed offspring too.

This is the Therizinosaurus in ARK: Survival Evolved

Appearance: The Therizinosaurus has a physique reminiscent of a Tyrannosaurus. Except for the legs, the Therizinosaurus is covered with feathers. Its small arms end in rather large claws, which in turn end in three long and sharp claws each.

Wild: The Therizinosaurus is primarily a loner, using its claws to rip leaves from trees. However, it is quite possible that he will also be out and about in small groups of two to three dinosaurs. The Therizinosaurus is an aggressive herbivore, but will not attack you unless provoked or approached too closely.

If you’ve already angered it, flee quickly, as Therizinosaurus is less known for giving up its aim. Because of his sharp claws, almost nothing can stop him, which is why you should approach him carefully and with a plan, or avoid him.

Tamed: The Therizinosaurus is a true all-rounder when tamed. He can easily farm large amounts of wood and fiber with his claws, which you can increase by leveling up your skills. However, since the Therizino can only carry a small amount of weight, you should also level it up or have a suitable dinosaur with you to carry the load.

The Therizinosaurus can also hold its own in battle. With his strong physical strength and his sharp claws, he breaks through the thickest armor of his opponents and is almost unstoppable. In terms of raw strength, it can easily be compared to a T-Rex. How to tame the Therizinosaurus in ARK

How to hunt the Therizinosaurus: Since it will attack you as soon as you get too close, the easiest way is to set a trap for it. To do this, place bear traps on the ground that he will run into as soon as you attack him. Of course, you can also build a trap for him out of archways, set a bear trap there, and trap him there.

But this is not absolutely necessary if you place the bear traps around you at a safe distance and shoot at him. The Therizinosaurus will then run straight towards you, thus running into the bear trap. If he’s caught, shoot him with tranquilizer darts.

How to tame him: As soon as he is unconscious, put Mejoberries or kibble in his inventory and feed him to tame him. To keep the stun value up when taming, it’s best to use Narcoberries or Narcotic The Therizinosaurus takes a little time to tame, so place spikes around it for protection if you can, and stay with it throughout the taming process.

How to make the Therizinosaurus saddle

To craft the Therizinosaurus Saddle, you need to be level 69 and 40 Engram Points to unlock the recipe. You now need the following resources to craft:

How to feed a Therizinosaurus in ARK

Once you have tamed your Therizinosaurus, it is important to know what it likes to eat. Therizinosaurs are herbivores, which of course makes the choice of food easier.

How to breed the Therizinosaurus ARK

The breeding interval of a Therizinosaurus is 18 to 48 hours. How to Hatch Eggs: When you get a fertilized Therizinosaurus Egg from a successful mating, hatching begins. For this, the ambient temperature of the egg should be between 26 °C and 32 °C. According to standard settings, the little Therizino baby hatches after about 2 hours. After that, it takes about 11.5 hours of your attention, during which you keep putting berries, vegetables, etc. (see above) in its inventory. Pay attention to the embossing intervals every 8 hours to tickle the greatest potential out of the baby.

Once it gains juvenile status, it can feed from troughs on its own. The entire ripening period lasts about 4 days and 20 hours.