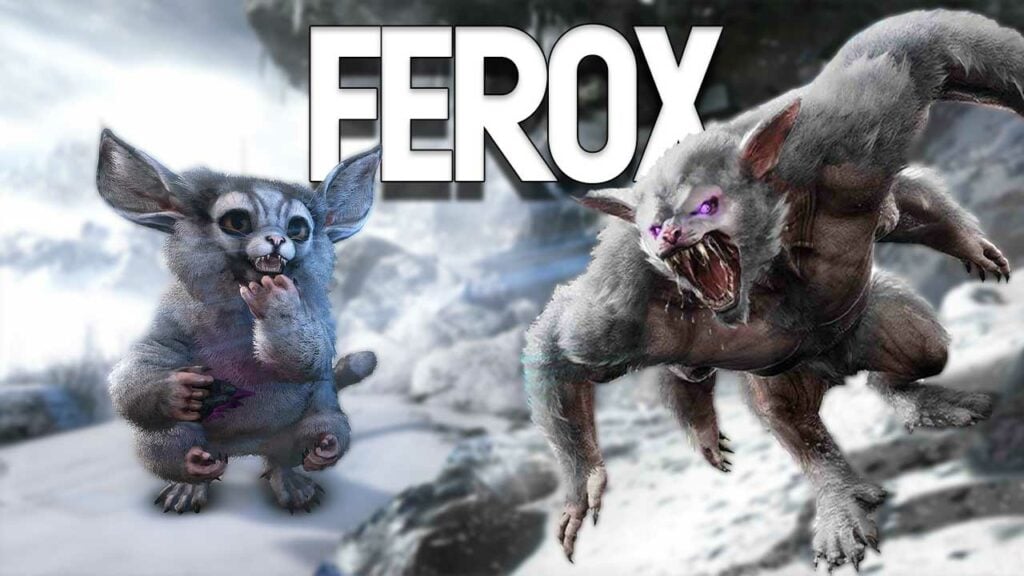 ARK: Survival Evolved: Ferox – How to Tame, Feed and Breed!

The Ferox can be found in caves and in the snow biomes of ARK Survival Evolved’s Genesis: Part 1, Genesis: Part 2, and Lost Island DLCs. With the help of Element, these cute, fluffy little creatures become monstrous, large, wolf-like hunters that are highly aggressive in their quest to destroy everything.

Find out everything you need to know about the little fluff in our Ferox guide. But also how to catch him, tame him, feed him, and breed offspring too.

This is the Ferox in ARK: Survival Evolved

Appearance: In its small form, the Ferox is a cute, fluffy bugger with big eyes and even bigger ears. He has four arms, two legs, and a fluffy tail. When transformed into his adult state, he is terrifying. Then he has huge teeth and a head similar to that of a wolf. He’s also about ten times bigger and more powerful than his smaller version, making his eyes and ears appear smaller.

Wild: If you meet the Ferox in its small form, it will greet you curiously and follow you if you have Element with you. If you don’t have one with you, it will usually move on. However, it can happen that even without feeding the Ferox with Element, it will spontaneously transform into its adult form, in which it will attempt to destroy everything in its vicinity. All Ferox Locations in ARK

The Ferox is discoverable in these spots:

How to tame the Ferox in ARK

The Ferox is passively tamed by feeding it Element. There is then a peculiarity or a small problem: every time you give him the element, and he has eaten it, he turns into his adult and aggressive form, which attacks you and all creatures nearby. To solve the problem, we have two variants of how taming still works:

In a cave: Many Ferox live in caves, which gives you an advantage if you have the grappling hooks for your crossbow. Foremost, you should eliminate the other creatures in and in front of the cave so that the Ferox is not distracted or injured in the fight.

When you only have the Ferox left that you want to tame, place the item in your rightmost inventory slot, walk up to it, and perform the “Feed item to tame” command. When the Ferox has the food in hand and is eating, shoot the grappling hooks into the ceiling and pull yourself up so that it can no longer reach you. Wait at the top for the Ferox to shrink back down, and repeat until it’s tamed.

With a trap: Also in the snow biomes, you can find Ferox in the wild. Since it becomes more difficult to get you to safety with the grappling hook here, you can easily set up a trap. To do this, take six foundations and surround them with a wall that is at least two walls high. Build a door on one side, a window next to it, and a ramp on the other side. Once you have done this, you make six more blankets.

How to feed a Ferox in ARK

Once you have tamed your Ferox, it is important to know what it likes to eat. Ferox are omnivores, which of course makes the choice of food easier, which means: You can offer him meat, berries, vegetables, etc. and he will eat it.

With a sweet tooth, however, the Ferox prefers Element that you have already been able to use to tame it.

How to breed the Ferox in ARK

The breeding interval for a Ferox is 18 to 48 hours. After a successful mating, if you play on default settings, the female Ferox will be pregnant for about 10 hours. After these 10 hours, you can welcome little Ferox Baby into the world. As a baby, it takes up another 9 hours of your attention, during which you have to keep putting food in its inventory. Pay attention to the embossing intervals every 8 hours to tickle the greatest potential out of the baby.