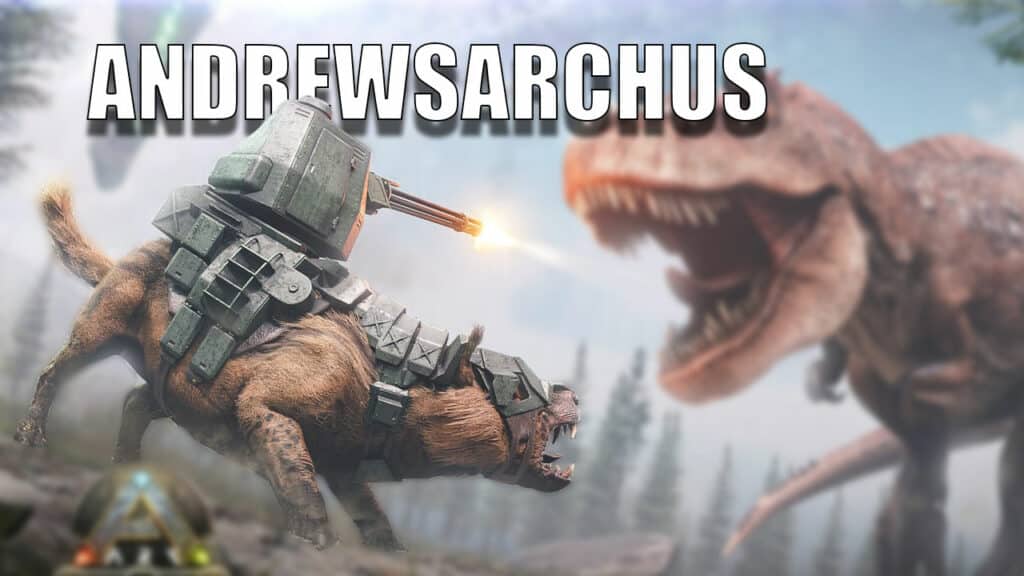 ARK Fjordur: Andrewsarchus – How to Tame, Feed and Breed!

The Andrewsarchus is a creature from the Fjordur DLC in ARK: Survival Evolved. It appears sluggish while foraging, but can become very fast when provoked. When tamed, he can carry a Turret on his back instead of a saddle, turning it into a mobile turret.

Find out everything you need to know about the omnivore in our Andrewsarchus guide. But also how to catch him, tame him, feed him, and breed offspring too.

This is the Andrewsarchus in ARK: Survival Evolved

Appearance: The Andrewsarchus looks something like a cross between a wild boar and a hyena. The body resembles that of a hyena, while the face and legs are reminiscent of a wild boar. It has 4 large incisors in its mouth. A crest of hair runs from the head and down the back, which is highest at about shoulder height.

Wild: The Andrewsarchus tends to appear clumsy and sluggish when foraging, but can run faster than you think when provoked. Like other whippomorphs, the Andrewsarchus is highly aggressive in defending its territory. As soon as he gets hungry, he will tear down anything that gets in his way. It pursues its prey or enemies wherever its legs carry it – even through deeper waters. Oddly enough, these creatures have a sweet tooth, and a little honey will soothe them.

With him and his Turret saddle, you can stay underwater for a long time because the Andrewsarchus is good at stopping in the air and the armor protects you. However, it moves slower in water than on land. All Andrewsarchus Locations in ARK

The Andrewsarchus is discoverable in these spots:

How to tame the Andrewsarchus in ARK

To tame the Andrewsarchus you need honey. You can easily break this down on honeycombs. You should also have a ghillie suit and wear it so that you are not recognized directly. When you find an Andrewsarchus that you want to tame, throw the honey to him. While he eats the honey, you mount him to ride – similar to the horse.

White arrows now appear on the left and right, which indicate the running direction. That means: when the left white arrow appears, press the button to walk to the left. While you hold down the button, the arrow turns green. Once the arrow turns red, release the button. This then drags on a bit and requires reaction speed.

To avoid being thrown off, watch out for the red rage bar behind the taming percentage and jump off just before it fills up. If you get thrown off, that’s not a bad thing either.

It may well be that you have to go through the entire procedure several times before you have tamed him.

How to craft the Andrewsarchus Turret Saddle

To craft the Andrewsarchus Turret you need to be level 74 and 45 Engram Points to unlock the recipe. You now need the following resources to craft:

In order to then shoot with the Turret, you still have to produce the ammunition at the fabricator and put it in the Andrewsarchus’ inventory. For every 2 ammo you need:

How to feed an Andrewsarchus in ARK

Once you have tamed your Andrewsarchus, it is important to know what it likes to eat. Andrewsarchus are omnivores, which of course makes the choice of food easier, which means you can offer it meat, berries, vegetables, etc. and it will eat it.

However, as a sweet tooth, the Andrewsarchus prefers the honey, with which you have already been able to tame it.

How to breed the Andrewsarchus in ARK

The breeding interval of an Andrewsarchus is 18 to 48 hours.

After successful mating, if you play on default settings, the female Andrewsarchus is pregnant for about 5 hours. After 5 hours, you can welcome the little Andrewsarchus baby into the world. As a baby, it takes another 6 hours of your attention, during which you have to keep putting food in its inventory. Pay attention to the embossing intervals every 8 hours to tickle the greatest potential out of the baby.

Once it gains juvenile status, it can feed on its own. The entire ripening time lasts about 2 days and 10 hours