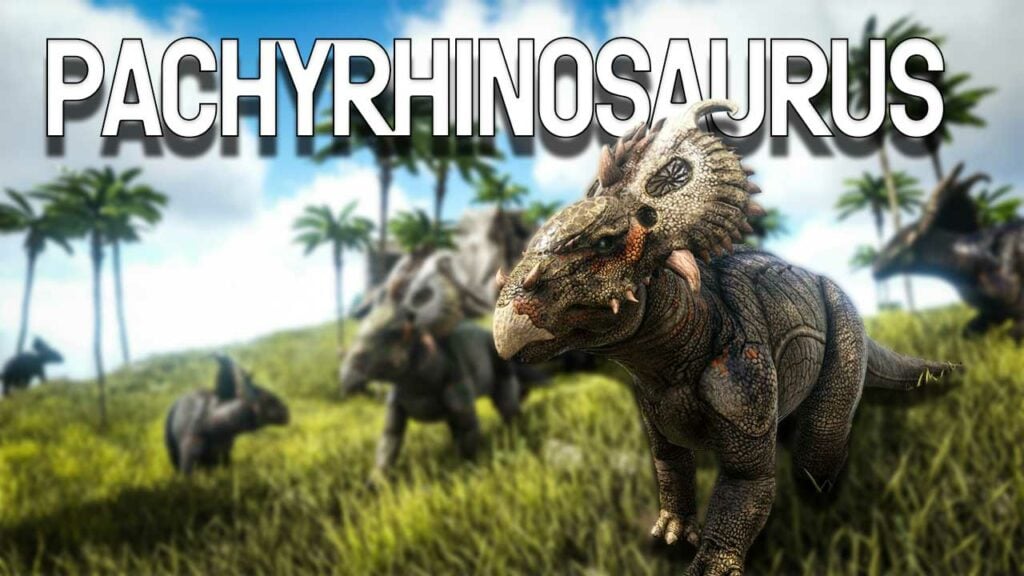 ARK: Survival Evolved: Pachyrhinosaurus – How to Tame, Feed and Breed!

The Pachyrhinosaurus is a perfect mount to start with in ARK: Survival Evolved, as you can already ride it at a low level. He can also carry loads, is an effective farm helper, and can use his unique chemicals to keep his rider safe.

Find out everything you need to know about the herbivore in our Pachyrhinosaurus guide. But also how to catch him, tame him, feed him, and breed offspring too.

This is the Pachyrhinosaurus in ARK: Survival Evolved

Domesticated: Since you can ride it from a low level (27), the Pachyrhinosaurus is an ideal mount to start with. Add to that the fact that he can farm effectively and when in distress can dump his unique chemicals on command. This allows you to easily escape from an attack when the Pachyrhinosaurus ignites its purple chemical. But beware: the chemical does not work on overly large predators, like the T-Rex or the Giganotosaurus. How to tame Pachyrhinosaurus in ARK

This is how you hunt the Pachyrhinosaurus: Quite unspectacular, like with the Triceratops, you take a crossbow or your bow and simply run away from it. In between, you turn around and shoot him. Try to aim for the body, as it takes less damage to its head. Due to his slow speed, the variant is possible, but make sure you always keep enough distance so that he doesn’t grab you by the horns.

You can make it easier for yourself if you stand on a cliff or on a large stone/rock and shoot at it from there. The Pachyrhinosaurus can’t get to you like this, and the chance of getting hurt is almost 0.

How to tame him: Once he’s unconscious, put bug repellent (recipe below) in his inventory and feed him to tame him. In order to keep the stun value high when taming, it is best to use Narcoberries or Narcotic. Normally, the Pachyrhinosaurus is tamed quickly.

How to make the Pachyrhinosaurus saddle

To craft the Pachyrhinosaurus Saddle, you need to be level 27 and 18 engram points to unlock the recipe. You now need the following resources to craft:

How to feed a Pachyrhinosaurus in ARK

Once you have tamed your Pachyrhinosaurus, it is important to know what it likes to eat. Pachyrhinosaurs are herbivores, which of course makes the choice of food easier.

How to breed Pachyrhinosaurus in ARK

The breeding interval of a Pachyrhinosaurus is 18 to 48 hours. 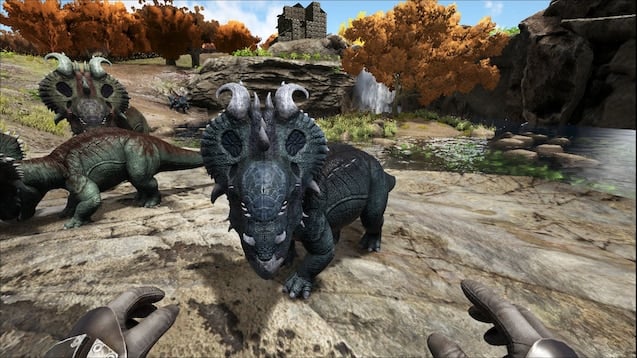 How to hatch eggs: If you get a fertilized Pachyrhinosaurus egg from a successful mating, hatching begins. For this, the ambient temperature of the egg should be between 22 °C and 28 °C and in the egg incubator at 25 °C. According to standard settings, the small Pachyrhinosaurus baby hatches after about 2.5 hours. After that, it takes about 4.5 hours of your attention, during which you keep putting berries, vegetables, etc. (see above) in its inventory. Pay attention to the embossing intervals every 8 hours to tickle the greatest potential out of the baby.