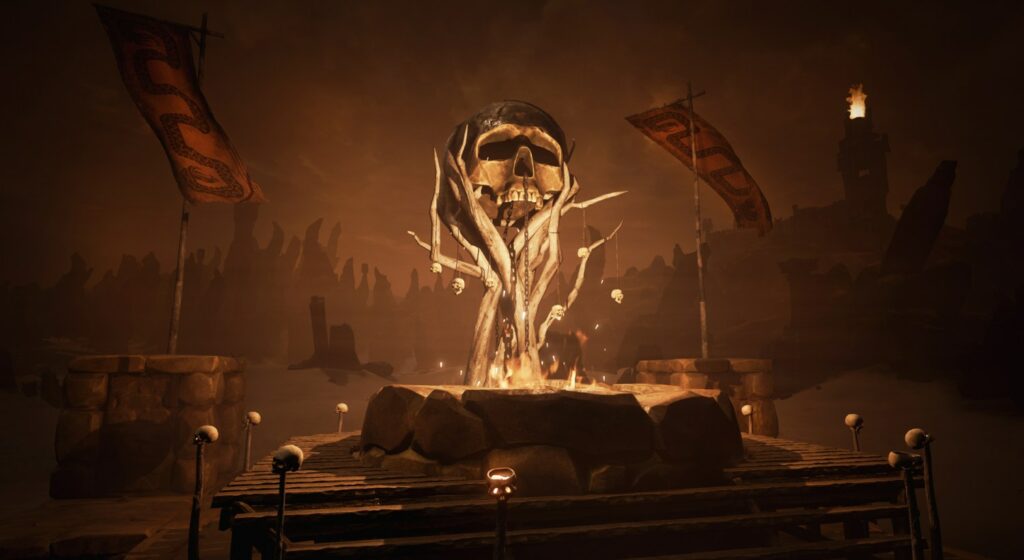 Conan Exiles – Where to build your Base

The world of Conan Exiles is a harsh one with many enemies lurking around, while you are just trying to adapt and survive. However, the survival game offers a base building system which should protect any player. Yet as a new player, it isn’t always as easy to find a good location. So, we decided to pick out some early game locations and explain why they are so suitable.

A roof above your head

As it might happen that the selected locations are already used by players on the PVP or PVE servers we will first give some advice. In the beginning, you won’t have access to most building parts or crafting stations. Because of this, its useful to build your base nearby a river or lake so you don’t need to make multiple sealed waterskins. Besides that, near water sources, you will often find crocodiles, eggs from the Shaleback and deer. Building your base around these locations will prevent you from dying of hunger or thirst.

However, if you have the chance it’s useful to build your base near other resources as well. Such as coal, ironstone, NCP camps, and spiders. In this regards, it means you won’t need to travel all around the map to get the desired resources. But, in a later stage, you can always build small outposts or another base. When playing on a PVP server most mountains or cliffs, such as location three, are easier to defend.

Location one is just on the other side of the river on either a small plateau or on the hill. As it’s in the beginning area you won’t have to walk too far to reach this place. The small plateau is just a lower part of the hill, so for the location of resources both are fine. However, the hill itself provides more ground to build your base on, but its closer to the NCP camp. The place itself is full of rocks and trees and the small plateau leads to the Imp cave. Besides that, it’s fairly easy to climb up higher from this spot to find other resources, such as feathers.

Most animals are ignoring this piece of land so you will only see the NCP camp and the cave of Imps. This cave is very important as it’s the best place to find crystals, which lessens the pain of not having ironstone and coal directly nearby. Besides that, when you walk or climb down the hill there is enough water to fulfill your thirst.

But, you won’t only find water down there as the river is full of fish and fiber and its a breeding place for the Shalebacks. If you are not a fan of just eating the eggs you can also kill any of the animals nearby to get meat. So, if you want to be safe quickly with all starting resources nearby this is a great place to settle.

The second location is accessible by following the smaller river that starts in the beginning zone. From here, just walk all the way to the point where the three rivers meet. During your travel, you will see some crocodiles and NCP’s that might attack you. However, you can avoid these by simply running or climbing away. Just make sure you don’t run out of stamina!

Near the river is a decent piece of land where you can build a small base. In the picture, you can see how we build two rooms, a porch at the front and an extra room on the second floor. The size of the house all depends on how high you want to build and if you want to cross the small rivers as well. No matter what, the house will have enough space for all the crafting stations, a bedroom, and multiple chests.

So why this location? The river provides enough fresh water and is a great place for crocodiles and deer. Besides that, there are many rocks around which won’t leave you short on stone and the few trees provide wood. However, the best part is that there is plenty of ironstone and coal nearby, so you don’t need to walk miles to gather enough of them. In addition, two small NCP camps are just up ahead and one camp is empty at a certain part of the day. Know the time and you can sneak in to loot their chest. Lastly, the base location is fairly in the middle of the map, so most locations are just a short journey.

To get to location three you just have to pass location two and follow the river until you see a plateau above you. The river itself appears to be a breeding place for crocodiles so make sure to dodge them. To get safely up, just stand on a rock to regain stamina before climbing. To get up and down easily next time it’s recommended to build a pair of stairs. However, make sure to either put them behind a wall or fence as otherwise, the crocodiles will climb up as well.

Another way of getting to location three is by going up the path of the mountain at location two, just keep walking near the edge to see the river. The moment you see a desert NCP camp, move to the left to walk to the bigger plateau.

You can either decide to start building on the small plateau or the bigger one above it. However, you can also decide to build on both as its easy to defend. While there are no enemies around to harass you, crocodiles will be below to kill for meat and an NCP camp is not far away.

Another reason why this location is so suitable is that a narrow passage at the back leads you to a small plateau with plenty of coal and ironstone. While it might be annoying to climb down for water, you can always fill some sealed waterskins before you unlock the well. As location two is not too far away you can quickly get some resources from that area. However, from the locations mentioned this one is closer to the northern part of the map and the jungle.

A choice to make

If you are familiar with Conan Exiles or have the level to conquer the higher level areas other locations might be more suitable for you. In this case, the Vulcano or the Jungle might be a place to check out.

In the end, you decide what location fits you the most as player whether it’s in the official servers or just you alone. But, hopefully, our tips and tricks will help you with finding the right location.