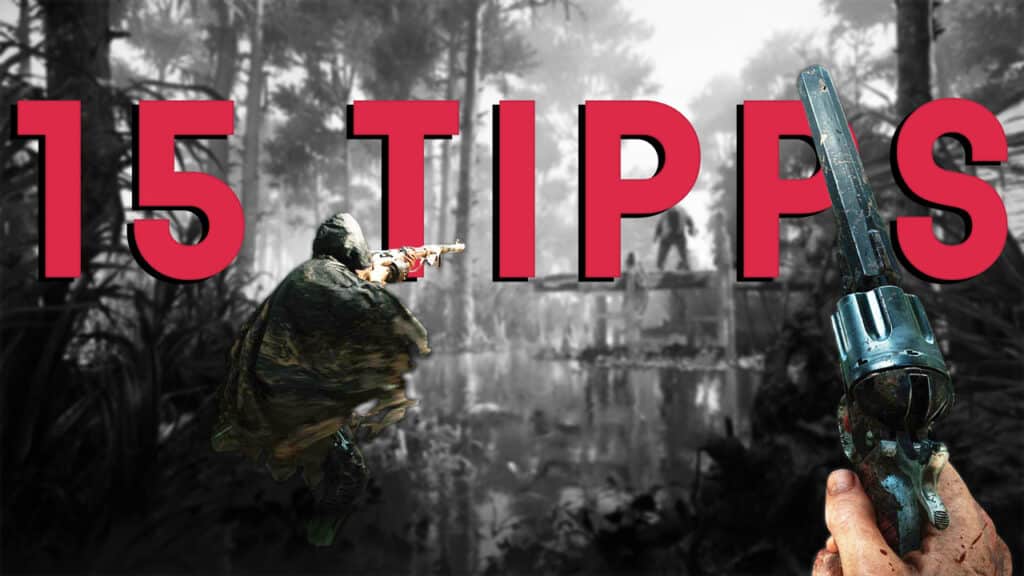 Because all beginnings are difficult, today we have 14 tips for beginners of Hunt Showdown – but also advanced players can learn something!

It’s tough to get started: we know, how tough it can be to get through this horror shooter. In today’s Hunt Showdown Guide we show you 14 tips for beginners and advanced players on topics such as:

Hunt Showdown Tipps: Before the match is after the match

Before and during the round: You should internalize the first 5 tips that we give you before the very first round of “Bounty Hunt”.

Before you even start the first round of quick play, bounty hunt or even training, you should put together the right loadout. Guns are now excluded here. This point is devoted to tools and consumables. Everyone should have the following loadout with them or with minimal adjustments: 2. Use the training mode

Hunt Showdown offers all hunters an increasingly difficult training mode. You can find this in the main menu. Here you not only learn the absolute basics, you can also earn 850 units of the real money currency “Blood Bonds”. That’s a free € 8.50. So this is one of the Hunt Showdown tips that will make you not only better, but richer.

Steadily increasing: In level 1 of the mode there are only weak mobs without weapons. In addition, the boss you have to look for is severely weakened. In level 2 you will encounter stronger mobs and a slightly less wounded boss. In stage 3 of the Hunt Showdown training mode you have to face live conditions except for real players. Remember weapons: In our weapon comparison tests, you can see that there are actually better and worse weapons. “Isn’t that the case in every game?” You ask yourself. Hunt Showdown is a little different. Despite different weapons, you need exactly the same number of hits on player characters with many. So you look at the differences between the guns in detail.

Because of this, your main criteria should be how much you enjoy playing a gun and how well you get on with it.

Important information about ammunition: If you have a main and a secondary weapon of the same caliber, both ammunition reserves are added together. Especially important for long trench warfare. 4. Get to know all the mobs

One of the most important tips for Hunt Showdown is knowing every mob. They don’t just look different. Each type of enemy has to be fought differently. Some even have immunities against certain types of damage:

If you want to learn more about the various mobs and opponents, take a look at our explicit guide (later filing will follow).

In Hunt Showdown you will primarily face two different kinds of teams. Even if you are looking for a match alone, you will encounter duos or trios. A real solo mode is only available in the battle royale mode “Quickplay”.

So find someone you can play with. Alternatively, you still have matchmaking, which you can use to find random hunters of your or a similar Elo. Unlike in many shooters, most players are nice and happy to help. Not everyone though. 6. Check the map and surroundings right after the start

Off into the real game: As soon as you spawn on the map, press “TAB” to open the map. Check exactly where you start and where the refill stations are in the run-up to the round. These are the wagon symbols on the map.

If you have orientated yourself, close the card and hold down “E”. With the now active Darkvision you can track down the blue glowing clues you need to collect. 7. Watch out for player spawns

Speaking of checking your surroundings: in many cases you are at a starting point that is right next to one or more other teams. Developer Crytek has set two spawns for almost every hint location. Due to the limitation of 12 players per round, not all of them are occupied. Find out where the player spawns are in this guide!

If you think you can, cut the other team off or wait for them. Then blow out their kerosene lamps as quickly as possible.

No matter whether you intercept your opponents before the first clue or send them to sleep with the water devils, you always have to be as quiet as possible. Of course, sprinting is louder than running, which in turn makes more noise than crouching. Other sources of noise that can give you away are:

Fortunately for you, there are always lanterns above stables and kennels. Destroy them quietly with throwing knives, silenced shots, or directly with another lit lamp. This is how you silence them beforehand. Warning signs aren’t just about birds, mobs, or other AIs going crazy. Gunfire, in particular, should put you on the alert. Learn to estimate how far away they are. You can learn that and the sound of various weapons.

The shop allows you to fire weapons in a simulated environment. You can even change the distance steplessly by simply scrolling up or down and try around as much as possible.

Why is that important? If you know what a weapon sounds like and how far away it is, you can better assess the danger it poses and plan your next steps. If you hear a shotgun, you keep your distance. If you hear a Sparks LRR, you can take advantage of your opponent’s reload time and storm him. This point goes hand in hand with your knowledge of maps and weapons. However, you must not be too careful. Never sit in one position for too long. Especially in firefights you should follow the motto of real snipers: “Never fire more than 2 shots from one position.”

Keep moving, don’t sit in the thicket, and never forget, your goal is the boss and his bounty and not studying the bark of trees.

When you get to the boss lair, you don’t necessarily have to shoot them or blow them up. You can also use melee weapons to attack the bosses.

There are axes, pitchforks, shovels, and hammers lying around in the areas around the lair. With their help, you can defeat any boss almost silently. Best of all, it goes faster than most firearms.

Exception: In the case of the butcher (affectionately called Man-Bear-Pig) and his burning hook, you should keep your distance up to level 11. But what do you have the extinguishing bombs for from then on? You can use them to put out the fire on his hook. 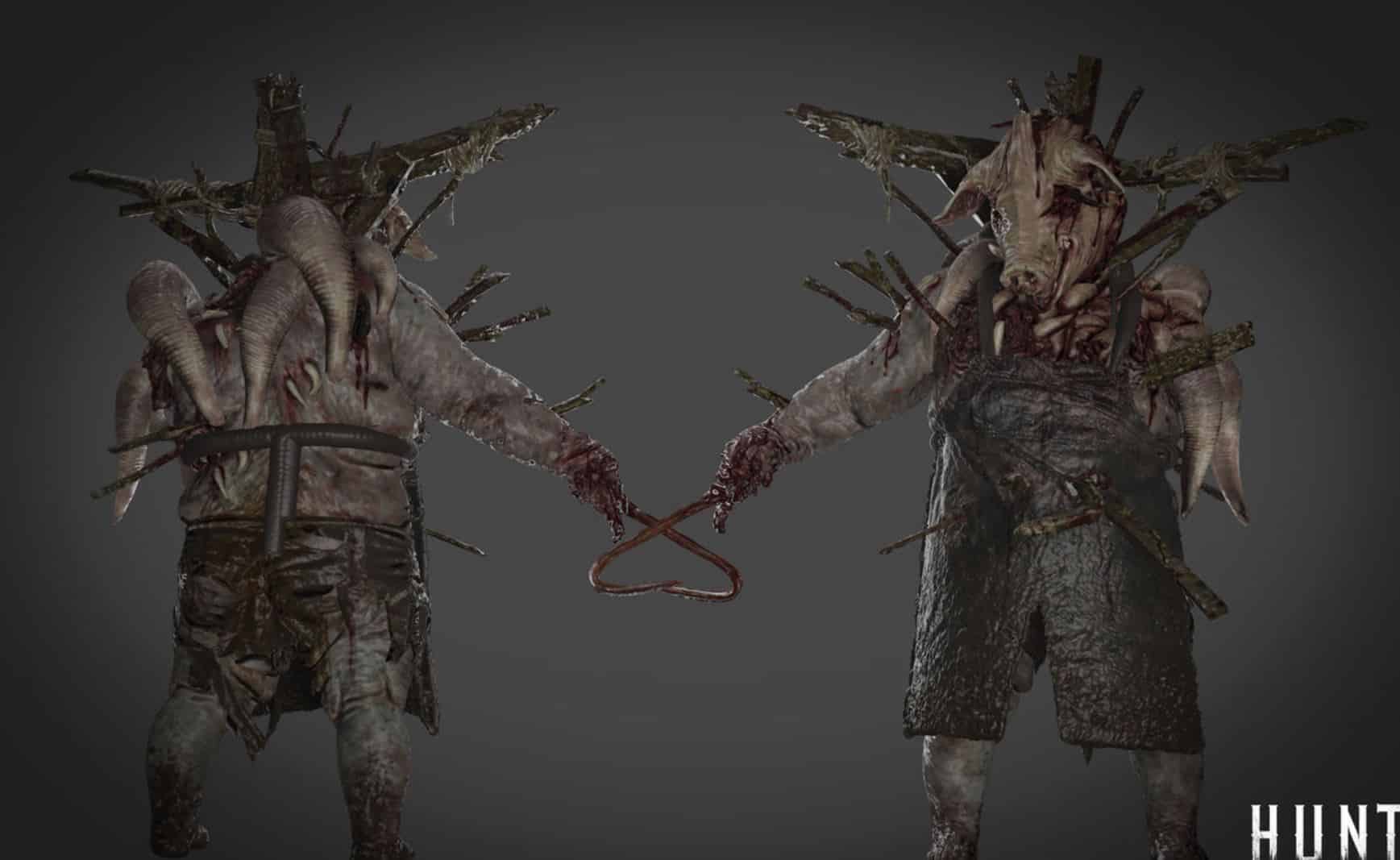 You have successfully completed the first round. Now is the time to invest the new money wisely.

In addition to money, you receive upgrade points during and after a round, which you can invest in traits and life points. Traits or perks give your hunter special abilities. Depending on your style of play, you have to choose different ones. Read through all the trait descriptions in the upgrade shop and then decide. The last of the Hunt Showdown tips may seem obvious at first. But the tip is particularly important for this shooter: games, games, games. You can only develop effectively by playing regularly and reflecting on your mistakes.

Unfortunately, our tips for beginners will not make you a professional overnight. But keeping them in mind can help you improve!

It’s your turn: Have we forgotten, overlooked, or misrepresented something? Let us know and give us your personal tips in the comments below, so you might help other players as well.