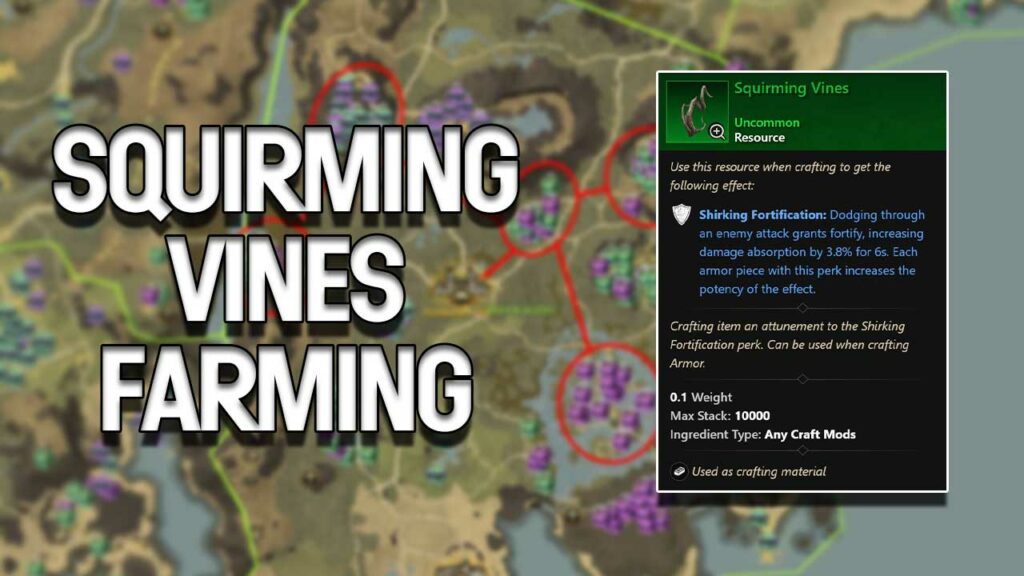 In the MMORPG New World, you need Squirming Vines in the late-game, especially in the PvP siege battles. Our guide will tell you where you can find Squirming Vines and how best to farm them.

Those are Squirming Vines: Squirming Vines are one of the special resources you can find in New World. They belong to the rarity “uncommon”, but have a meager drop chance of about 0.15-0.33%. Once you find some, you can use them on weapons and armor to add certain perks.

Here you can find Squirming Vines in New World

As mentioned at the beginning, the Vines have a very low probability of 0.15 – 0.33% of appearing worldwide. On the one hand, Squirming Vines are dropped by Spriggans, level 65 tree creatures that are among the strongest enemies in New World, on the other hand, they can also appear in chests.

Especially in Reekwater, you can find the rare resource in ancient, and storage chests. Don’t be discouraged, though, because you might open a hundred chests and find only one Vine. To make your farming method as effective as possible, we have marked the chests on the New World Map and picked out suitable routes for you: More chests are marked on the map, all of which can contain the Vines. However, the fastest run you can make is to run west from the town and collect the few chests there. Then move north to the tower, east to the pond, east to the cave, and south to the lake.

Repeat the run until you have collected enough resources. You can also sell everything you don’t need in the auction house and use the profit to buy more Squirming Vines from other players. YouTuber ItzTermx created this farm route for other trophies and recorded it as a video, but you can also use it for the vines: