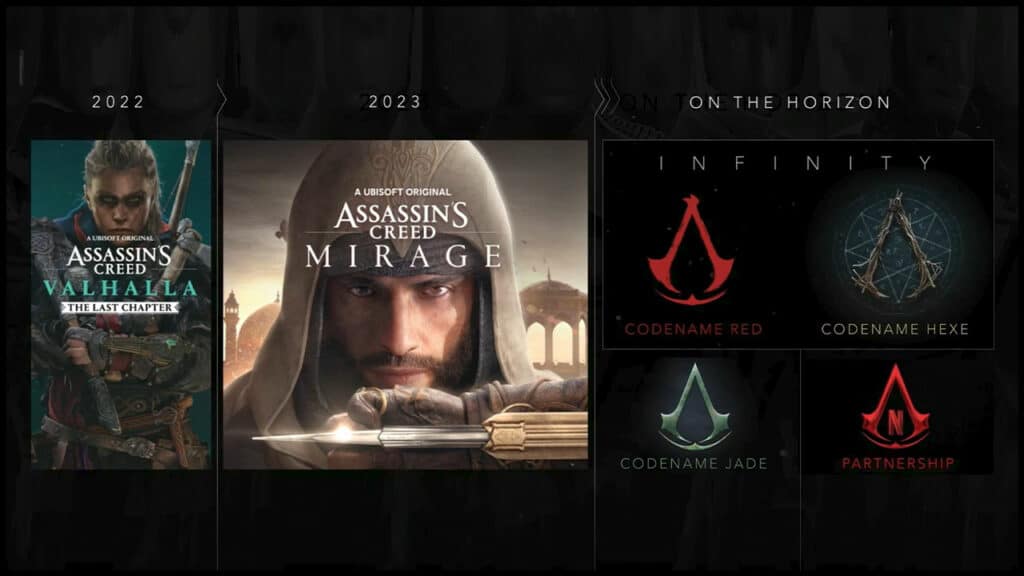 Assassin’s Creed: Baghdad, China, Japan – This is What the Future Looks Like

During the Ubisoft Forward on September 10th, Ubisoft revealed the future of the popular Assassin’s Creed series. In addition to the final Valhalla chapter, the next AC was presented with Mirage, but future parts also got a teaser.

Later this year, The Final Chapter is the finale of the Valhalla saga in Assassin’s Creed. The expansion will be free for all Valhalla owners and completes the story around Eivor.

The Final Chapter is primarily intended to add a quest line to the game that will conclude Eivor’s story and close any threads that have opened up throughout the game.

Mirage is the next Assassin’s Creed installment

Leakers have already predicted it, and Ubisoft has already announced the name of their next Assassin’s Creed. Mirage has now received its first trailer and revealed new information.

What we know: Assassin’s Creed Mirage is planned for 2023 and is the next big premium title from Ubisoft Bordeaux after Valhalle. In Assassin’s Creed Mirage, you take on the role of Basim, a wily street thief with nightmarish visions who is looking for answers and justice, but is unable to fight or climb properly at first.

After an act of deadly vengeance, Basim flees Baghdad and joins an ancient organization – the Hidden. As he learns their mysterious rituals and powerful tenets, he will hone his unique abilities, discover his true nature, and embrace a new creed that will change Basim’s fate in ways he never dreamed.

According to the developer studio, Mirage should honor all parts of the series and incorporate so many elements from old parts. This also means that Mirage returns more to the roots and focuses primarily on 3 pillars: stealth, assassination and parkour. Basim will also be equipped with some gadgets to better adapt to different situations.

During their show, Ubisoft announced 3 more Assassin’s Creed parts, for which there is no release date yet. Codename Jade, Codename Red and Codename Hexe are probably not the final names of the 3 games either.

This is Codename Jade

In the trailer, we see a falcon flying through a Chinese city, up to the protagonist, which I guess you can completely create yourself. He sits on the impressive Great Wall of China and, typical of assassins, throws himself into the depths.

This is Codename Red

Codename Red should be much more interesting for many Assassins Cree fans. Because this is not a mobile title, but a premium title that comes after Mirage. Codename Red is set in feudal Japan and you take on the role of a shinobi, i.e. a ninja. This is exactly what fans have been asking for for years.

In the short trailer we don’t see much yet, except for our protagonists and a small part of the Japanese world. Codename Red is said to represent the future of open-world RPGs in Assassin’s Creed. Red is being developed by Ubisoft Quebec, who were also responsible for Assassin’s Creed Odyssey.

There is far less information about Codename Hexe than about the other titles. Hexe (Witch) is said to be an Assassin’s Creed experience that hasn’t existed before.

The teaser doesn’t tell us any more info. However, leakers have learned that Hexe is set in 16th-century Europe, at the height of the witch hunts. It should go more in the direction of action-adventure like the first parts, instead of using the open-world RPG formula of the last parts. According to the leaker, the targeted release should be 2026.

Which Assassin’s Creed installment are you most looking forward to? Write us your opinion in the comments!