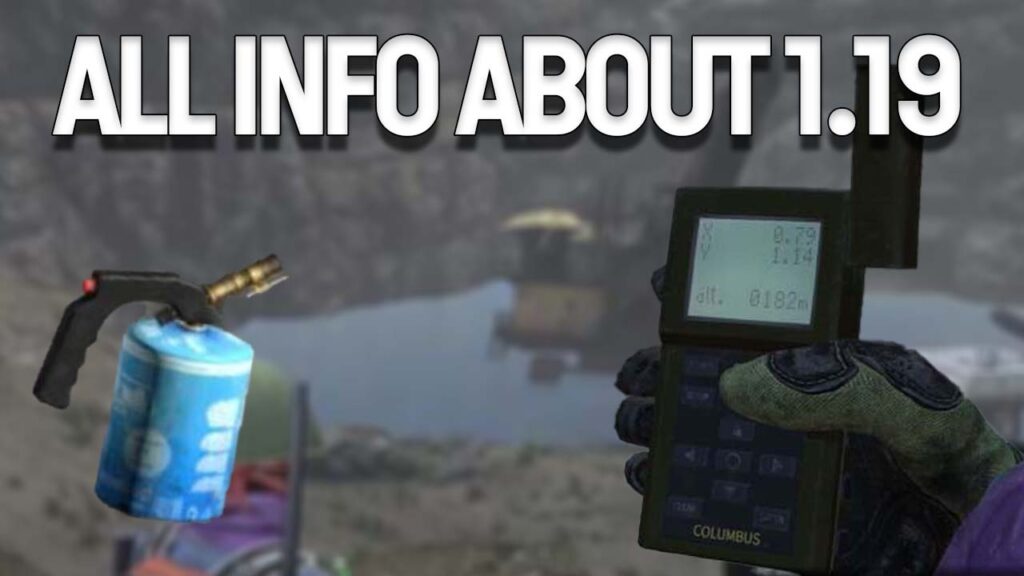 DayZ: All Information about 1.19 Update from Developer Stream

One day before the release of DayZ 1.19, Bohemia Interactive showed some of the new features and content in a livestream. We tell you what changes you can expect from September 22nd, with the release of 1.19 Experimental.

What it’s about: Bohemia Interactive had already announced the stream in a Twitter post. By analyzing the post, we have already found out some information about new content. In the livestream, more features were then presented and explained through a small journey through Livonia. We show you all the information that the developers showed in the stream.

Update 27. September: The developers of DayZ have announced that the stable version of 1.19 will be released for all platforms on October 18. In addition, there will be a full wipe for the release of 1.19 (stable).

New Weapon, Military Truck and Navigation – This is the new Content

The stream of the new experimental version of DayZ 1.19 was full of new content. This includes a new weapon, changes to the character controls and various map changes, which we explain in more detail.

The DLC Livonia allows you to explore a completely new world in DayZ. In the update 1.19, the map will now be further adapted and expanded. One component of this is, for example, new dynamic events, such as the helicopter crashes – but more about that later. In addition, the developers built new, interesting places. In addition to sawmills, this also includes a large quarry with a huge excavator and dump truck.

The character controls have also been reworked. So far, you sprinted quite easily with your character and could move around easily. With the new inertia system, the player’s control is more sluggish when sprinting. But don’t worry if you don’t like the system. You can also switch to the previous system in the server settings. Additionally, running up and down hills has also been adjusted and fixed.

One of the biggest adjustments is the overhaul of the vehicle controls. In the stream, the developers talked about how driving will be fun again.

Braking and Accelerating: In addition to accelerating quickly using the shift key, it is now also possible to brake faster and more abruptly.

Automatic or Manual? The developers have implemented an automatic control in DayZ, which allows you to drive without shifting through the gears yourself. This is Bohemia Interactive’s response to a request expressed mainly by the community from countries where manual gear shifting is less common.

Configuration: But fans of manual control are of course not left out. It is also possible to specify the preferred type of gear shifting in the server settings.

According to initial rumors, the military truck was particularly hotly anticipated. At the end of the stream, a small group ambushed the developers. The group raced towards the player with a military truck. Apparently, at least four people fit into the truck. It is still unclear whether the truck can be expanded with a gun or not.

One of the surprising new features is the new way of navigation. Maybe you, like many others, used an interactive map of DayZ on the second screen besides playing, or always had to get out of the game when you wanted to get your bearings. Bohemia Interactive is now introducing a new item that makes navigation much easier.

With the battery-powered GPS receiver, you can have it tell you the sector you’re in. To use the new navigation even better, we recommend you to use the tourist map. Yes, you heard right. Until now, the map was rather useless, but in combination with the GPS, you can even have your position displayed on the map.

Configuration: For navigation, you also have the option to set various options in the server settings. There you can determine whether the player position is displayed directly or only the coordinates for the respective sector.

With the SSG 82, a new weapon finds its way into the world of DayZ. This bolt-action rifle shoots 5.45x39mm cartridges and is primarily found around police areas, such as police cars or the police stations.

The SSG 82 comes with a fixed sight and is not a high military weapon due to its civilian use, but rather low to mid-tier.

To make the world even more exciting, Bohemia Interactive has decided to expand and adjust the dynamic events. Previously, these included police cars and helicopter crashes, where you could find better loot. New events will replace the randomly spawned police cars.

An example of new dynamic events are road accidents where a police car is present or military convoys standing next to roads. There they are broken vans and armored vehicles with good military loot.

Who doesn’t know it? You use your military boots for what feels like weeks in DayZ, and if they ever wear out, you just grab the next pair that falls in front of your feet. Or you’re looking for something drinkable and find a Fronta, which is of course in perfect quality.

But that’s the end of it now. The developers have integrated a system that assigns a random value to each item, indicating how worn it is. So you’ll have to be a bit luckier to find perfect drink cans or boots.

In addition to the major changes, some minor tweaks and new elements were also shown, which we summarize for you here:

Grenades: Up until now, if an enemy becomes a grenade on you, you probably barely noticed until either you or the less talented thrower took damage. With update 1.19, you’ll hear the advent of a grenade much more clearly and loudly on various surfaces, giving you the opportunity to react faster and better.

Bloodstains: Until now, it was quite annoying when you didn’t immediately notice that you were bleeding after a fight with zombies. It wasn’t until the screen slowly turned gray that you suddenly realized you were suffering from severe blood loss. From now on, you’ll notice it faster, because the developers have implemented dripping blood spots in the UI, which indicate that you should look for a bandage as soon as possible.

Eye Patch: Already when analyzing the Twitter post, with the announcement of the stream, we speculated how much the eye patch will restrict the field of vision. Now we know for sure – the view will only be subtly restricted in the upper left corner, and the eye patch currently has no real use and only serves as a cosmetic item.

Welding Torch: An item that was only shown for less than a second and not really discussed is the welding torch – at least, we assume that’s what it is. You’ll probably use the torch to repair parts or build your base.

Personal Tip from the Author: If you want to experience the changes yourself, you can try out the new features of 1.19 on DayZ’s experimental servers starting September 22.

You want to join our community and discuss about DayZ? Then join our Discord server or visit us on Facebook, we are looking forward to you!