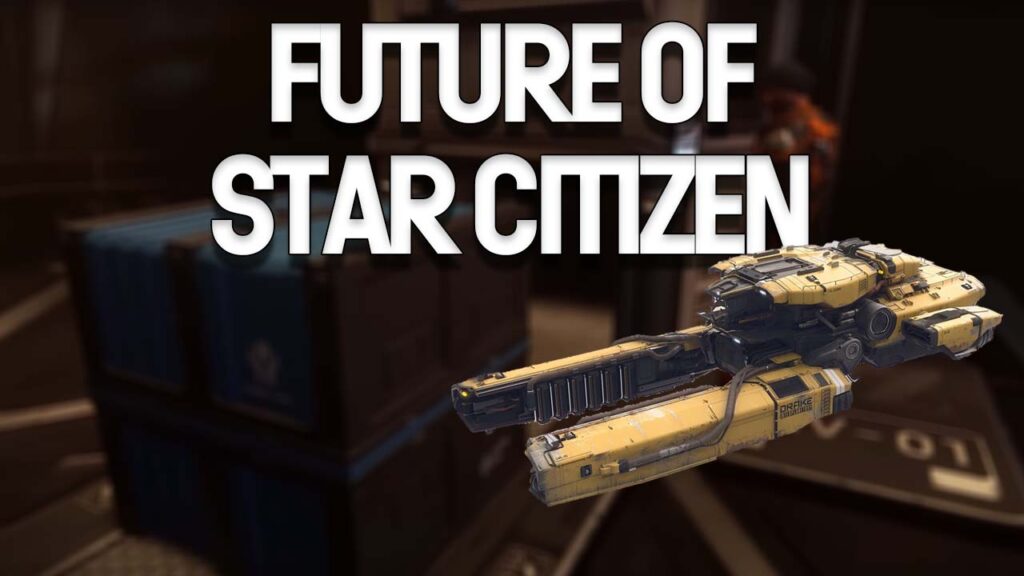 The space adventure Star Citizen is constantly changing, and today we want to show you what version 3.18 and the subsequent updates have in store for you.

That’s what it’s all about: The release of the Alpha 3.18 version won’t be long now. Reason enough for us to take a closer look at the roadmap for the upcoming updates, discuss what new features Star Citizen is getting, and speculate about the effects this will have.

We want to clarify that some features are interpretations on our part because while we know, certain features are coming, it’s unclear to what extent developer CIG will implement them.

With the 3.18 comes the Drake Vulture and Corsair

But we know that in the upcoming version 3.18, two new ships will enter the world of Star Citizen. Both fit perfectly with the overall theme of 3.18 – Salvaging & Cargo Refactoring. But more on that later.

Drake Vulture: The Drake Vulture is the first ship that can be actively used for ship salvage. Using the stem, the ship can dismantle the hull of a wreck, process it inside, and then store it in handy crates. The Reclaimer, already in the game, is also a salvage ship, but the Vulture will be a salvage ship for beginners and has room for one person.

Drake Corsair: The Corsair is a multi-crew expedition ship. This will give you plenty of space and enough guns for decent defense. Not much is known about the Corsair so far. The concepts that have already been shared are subject to change before the release of Alpha 3.18. However, you will probably also have a lot of space on board for your goods and goods with the cargo update.

The 3.18 update revolves around salvaging and cargo refactoring

As you’ve noticed, the 3.18 revolves a lot around the salvage feature and how you handle your cargo. With the update, CIG brings new possibilities into play, further refined and further developed in the following updates.

Hull Removal: One of the core features is ship hull recovery. For example, you and your crew can use the Drake Vulture or the Reclaimer to visit shipwrecks and remove the hull from them. The collected metal is sent to an onboard refinery, which is pressed into handy boxes. You can then use the tractor beam on your multi-tool to move and store these in your storage room. You can then sell the collected material again at a trading post.

Cutter: Another feature in the upcoming Star Citizen Alpha 3.18 is the cutter attachment for your multi-tool. You can then use the cutter to weld on door hinges, for example, to open the door. You even have the option of making the cuts yourself by free cutting. It is also conceivable, in combination with the salvage mechanics, that you can uncover and cut out individual components of ships, such as weapons, generators or similar, to sell these components individually. However, this is only a theory.

Repair by hand: Another extension for the multi-tool allows you to repair your ship by hand. This feature lays the groundwork for previously announced ships that serve as repair stations, allowing you to repair smaller ships. In general, this is a feature that can significantly enhance the multi-crew experience.

This brings the future of Star Citizen

Slowly but surely, a picture can be seen of the content that will follow in version 3.19 and 4.0 after 3.18. We have here a list of vehicles that are likely to make their way into Star Citizen by the end of 2023, as well as some features that have already been announced and confirmed.

These vehicles are planned

Here we have summarized a small list of possible vehicles. It is important to note that many ships are concepts only, and features and appearance may change.

Argo (SRV): A ship from Argo has already been announced. This may end up in the game within the next year. The SRV is even said to have a tractor beam on the ship. The large tractor beam for ships has already been confirmed by CIG and could appear in June 2023. Another argument in favor of the SRV is that it is a cargo ship, and the next updates will focus on cargo and its transport options. A new cargo ship just goes too well with a cargo update.

Hull-C: The Hull-C is also a large cargo ship. As seen in concepts, many large containers fit the Hull-C. Along with the tractor beam, larger containers should also become accessible to the players. With the Hull-C, a suitable transport option for these large containers would appear in the game.

Banu Merchantman: The Banu Merchantman is currently in development. This ship is a large flying market center. There are several options for shops on board where other players may then be able to purchase items. Unfortunately, more details about the Merchantman are not yet known. It will likely make its way into the game in June 2023.

Origin X1: Another hover bike appears with the Origin X1. However, the Origin X1 is a luxurious version of a hover bike. You can then use it to hover over the planets and moons. This bike could also be implemented by June 2023.

Lynx: Speaking of luxury: With the Lynx, a luxurious version of the Ursa Rover could appear in Star Citizen as early as February 2023. You can then dash across the planet’s surface in style.

San’tok.yāi: A fascinating ship is the San’tok.yāi. It is a medium military hunter of the alien race Xi’an. So far, there are few alien ships in the game. With this spaceship, you would have a good-looking and protected fighter.

You might also be interested in: Star Citizen: How to change your spawn planet & start in the spaceship

In addition to the new ships and vehicles, some new systems could also come into play that significantly improve and expand the crew’s interaction.

Resource Management Systems: A feature that adds physical components will appear with the Resource Management System. So you can interact directly with your generator, cooler, or shield generator. You may also no longer install the parts via a UI but manually. This also allows you as a crew to selectively dismantle ships and connect to the salvage mechanics. Imagine you are fighting with your crew, and suddenly one of your crew members needs to repair shield generators or put out fires. This feature will pave the way for such opportunities in 2023.

Life Support Systems: Another exciting feature is the life support systems. This means that the oxygen balance, for example, becomes important. Your ship begins to produce its oxygen and distribute it to certain areas. However, this can mean that, for example, the oxygen supply in an area is only sufficient for a certain number of people. In addition, you might not want to fly your spaceship naked because of the risk of the oxygen systems failing. In addition, these should have a higher priority in case of a possible repair during a fight.

Computer Blades: With the help of Computer Blades, you should be able to expand your ship’s capabilities through expansions in the ship’s computer. You may be able to use it to automate tasks on the ship. Previously, you might have needed a large group, and with the help of the expansions, tasks can now be completed alone. For example, your turrets could fire automatically while you fly the ship. With this you would not be dependent on a board gunner and could steer the ship almost alone. Or maybe the computer blades just support your target systems.

We don’t yet know exactly what the new systems will look like. However, a rough picture can already be drawn of the direction in which CIG is headed in 2023. You can expect many changes in the area of ​​multi-crew and the handling of your cargo.

Tip: Find out more about changes to the game and the future of Star Citizen at Citizencon on October 8th.

Would you like to join our community and discuss Star Citizen? Then join our Discord server, we look forward to seeing you!