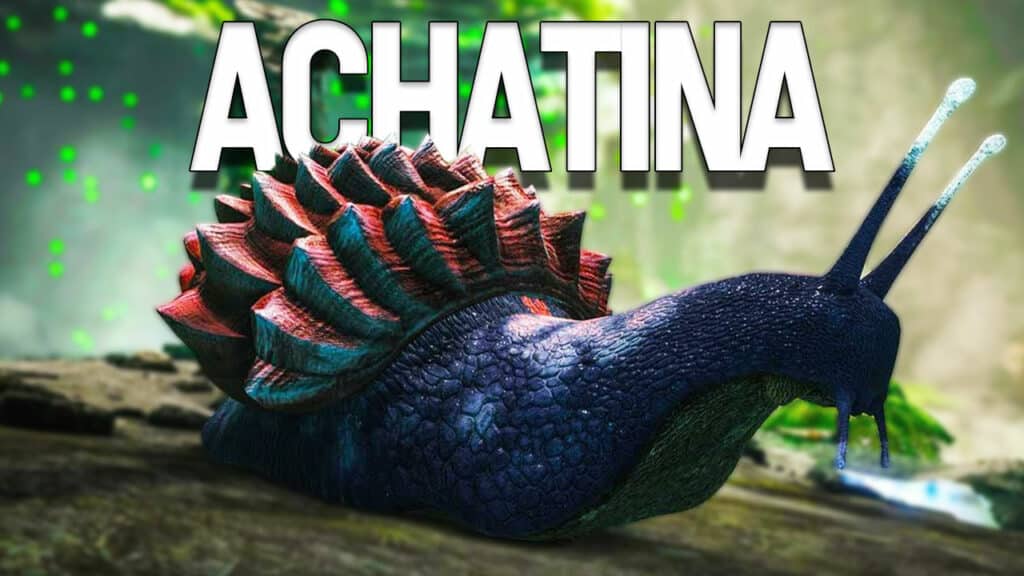 ARK: Survival Evolved: Achatina – How to Tame, Feed and Breed!

The giant snail Achatina takes over your cement production in ARK: Survival Evolved once you tame it. While not much else, multiple Achatinas are a perfect source of Cement.

In our guide to the Achatina, you will find out everything you need to know about the large species of snail. But also how to catch him, tame him, feed him, and breed offspring too.

This is the Achatina in ARK: Survival Evolved

Appearance: The Achatina looks like a giant snail, although its shell is also reminiscent of a shell.

Wild: You usually see the Achatina simply crawling around. It’s passive and doesn’t react aggressively either, although even that wouldn’t matter since, like a snail, it wouldn’t be able to summon up the highest speed to chase you.

Domesticaded: Once you have tamed the Achatina, build an enclosure for her and set her to roam, causing her to produce cement (aka Achatina Paste) on her own, which you can later collect from her inventory. Unlike other creatures in Ark, she also poops cement. With a large Achatina breeding, you will never have to make your own cement again. All Achatina Locations in ARK

The Achatina is discoverable in these spots:

How to tame the Achatina in ARK

How to hunt the Achatina: Take a bow or the crossbow to shoot the tranquilizer darts at her. Pay attention to the level of the Achatina so that you don’t accidentally kill her with the crossbow.

How to tame her: Once she’s unconscious, put the sweet vegetable cake (recipe below) in her inventory and feed her with it. To keep the Achatina down and the stun value up, it’s best to use the anesthetic or Narcoberries. The Achatina’s stun value goes down pretty quickly, so be prepared.

How to feed an Achatina in ARK

Once you have tamed your Achatina, it is important to know that it only eats vegetable cakes. If you can’t craft it regularly, you won’t be able to provide it permanently.

How to breed the Achatina in ARK

The breeding interval of an Achatina is 18 to 48 hours.

After a successful mating, if you play on default settings, the female Achatina will be pregnant for about 8 hours. After these 8 hours, you can welcome the little Dunkleosteus baby into the world. As a baby, it takes up another 9 hours of your attention, during which you have to keep putting meat in its inventory. Pay attention to the embossing intervals every 8 hours to tickle the greatest potential out of the baby.