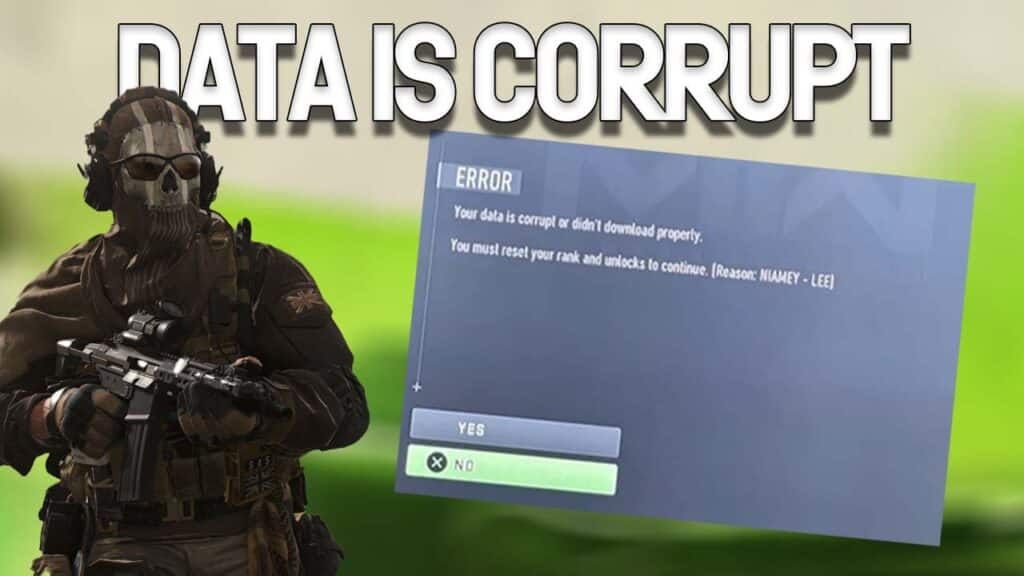 Modern Warfare 2 has been a lot of fun among shooter fans for a few days now, and yet there is a “data is corrupt” error message that has kept almost all players from playing since the last update (v1.03) on October 26. In this guide, we’ll tell you how to work around this error on PC and PlayStation 5 and what the error is all about.

What it’s about: Shortly before the release of the multiplayer for Modern Warfare 2 on October 28, the update v1.03 was released, which should presumably prepare the game for the release. But in addition, a blockade was introduced that warns players about corrupted data and a loss of progress and rank. Presumably, this error message is displayed by mistake and is later used for multiplayer. We’ll show you how to deal with this error and how you can still gamble.

How to Fix the “Data is Corrupt” Error on PC & PS5

So far, the “data is corrupt” error message only affects PC and PS5 players. We assume this bug should only work with the multiplayer mode to prevent joining with corrupted data. The developers have already commented on Twitter, and we will tell you how you can solve the problem.

Developers give Tips to PlayStation Players

The development studio behind Modern Warfare 2, Infinity Ward, has spoken out directly on Twitter and suggested a workaround that should help PlayStation players.

PlayStation players encountering a locked game tile or issue accessing campaign early access should open QUICK SETTINGS (options button) — and then back out.

This will trigger a return to the correct menu. This will be addressed in an upcoming update.

To fix the “Data is Corrupt” error on PS5, follow these steps:

Hint: Currently, you can confirm the error without any problems and don’t have to worry about losing rank or progress.

How to Fix the “Data is Corrupt” Error on PC

There is no direct information for the PC. However, you can confirm the error here without any problems and then usually continue playing. This does not affect your progress, ranks, or rewards from the Modern Warfare 2 beta. The error occurs with almost every player as long as you pay close attention to the feedback from the community.

Still, having Trouble with the Error? Follow these Steps

Are you unable to continue playing despite fixing the “data is corrupt” error, and do you experience frequent crashes, especially on your PC? Then here is a list of tips to help you solve the problem.

Outdated graphics drivers can also be a reason for a Modern Warfare 2 PC crash. So be sure to check if your graphics card is running with the latest drivers. Often, graphics card manufacturers release a new driver update shortly after the release of big titles.

If your PC occasionally crashes while playing Modern Warfare 2, and it is not due to the “data is corrupt” error message, you should also check your operating system. You might not have installed the latest system updates yet. Check your PC’s system settings and make sure you have the latest Windows updates installed.

Suppose you are using other apps like Discord or a browser while gaming, you should close these apps. Your PC may be unable to handle the system load, causing Modern Warfare 2 to crash due to a lack of resources. This is especially the case if your PC barely meets the system requirements.

You want to join our community and discuss about Call of Duty: Modern Warfare 2? Then join our Discord server or visit us on Facebook, we are looking forward to you!