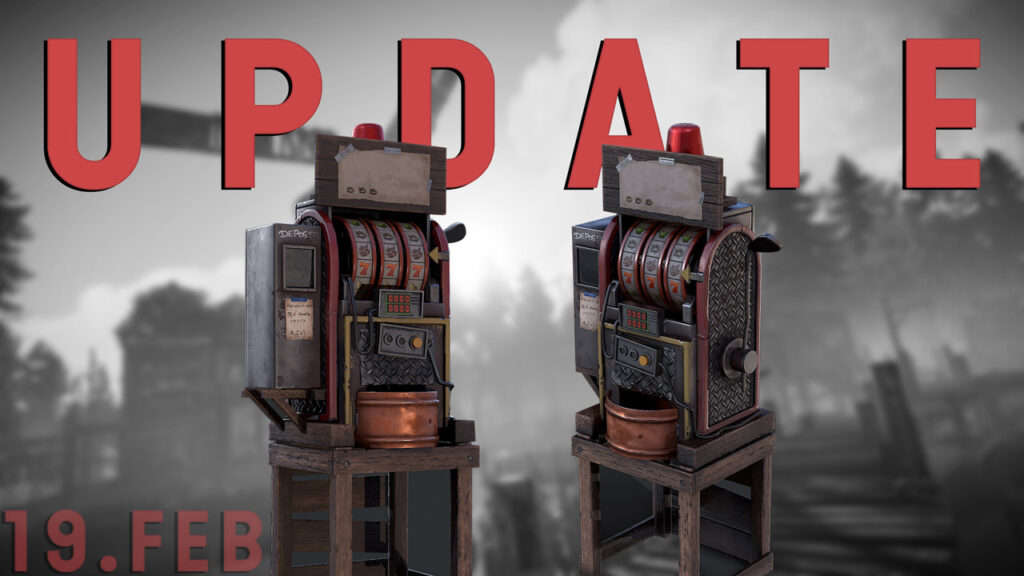 A new mini-game is introduced in a new Rust update. The Twitch drop and family sharing will also be adapted.

The update at a glance: The latest Rust update, which should appear in the next few days or a few weeks, changes less the game itself than the use of it. So the big issues this week are that Family Sharing will be disabled and the Twitch Drops will be less frequently available. Still, there is some new content too!

Bandits everywhere! Every Rust player has been to Bandit City at some point. This is considered a safe zone and offers all visitors the opportunity to get rid of their hard-earned scrap. There is now a new addition for this. From now on there seems to be not only two-armed bandits, but also one-armed bandits.

You can gamble away up to 1,000 scraps at the same time and win up to 6,000 of them with one move. By the way, with every move you lose 10 scraps. In order to use the machine at the moment, you have to set it up using the admin command “Spawn Slotmachine”.

How the drops are changing: As of today, fewer Twitch drop events will start. Instead of several in a month, there will soon be only one event. The developers do not want to reveal why this is so, but the current flood of free skins is probably due to the fact that the fee-based skin packages are less bought.

It should start on March 4th, which also brings a force wipe. With this all players have to start all over again. Here you can find out how to build a suitable basis for this restart!

Additionally, you can only expect one campaign per month going forward.

Family sharing deactivated: To cope with the growing threat of cheaters, developer Facepunch decided to deactivate Steam family sharing. Too often it is said to have been used for inconspicuous hacking.

Some Rust players, however, find this anything but good. They complain that there are countries where a Rust copy on Steam makes up a large part of the monthly salary. For this and no other reason they would use sharing.

Others have used the feature to allow them to change their character. Because this is generated via the personal Steam ID. If you start with different IDs, your own figure can be adapted.

Should family sharing be a thing in our games?

Other changes in the Rust update

Work-In-Progress: This is what awaits you

The illustrations in this article are from a video by ShadowFrax.