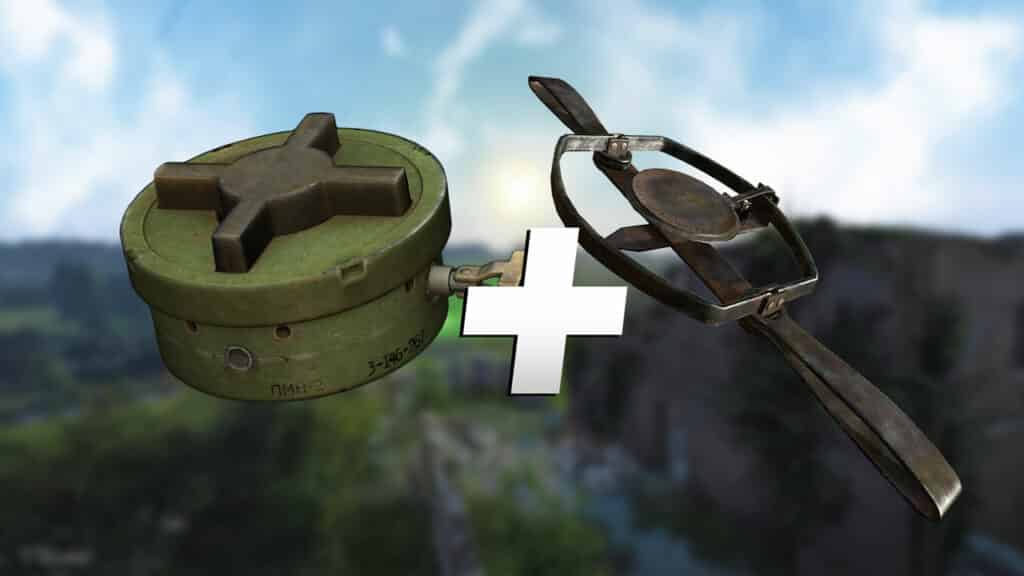 DayZ 1.14 has brought many possibilities into play to set a trap for other players, knock them out or blow them into nirvana. Today we’re going to show you the 5 deadliest traps we could find.

What are the traps? With the last DayZ update, 3 new traps were implemented in the game. In total, you can only use 3 of the 5 given traps to lure other players to their deaths or to rob them.

These 5 deadly traps kill everyone in DayZ

What components do you need? As mentioned above, you can only use three of the five traps. These include the bear trap, land mine, and trip hazard. In addition, you will need one or more grenades for many of the deadly homemade traps.

To build a trip hazard, you also require two small sticks and a metal wire.

You need these items: For this trap to work, you need a trip hazard and a grenade, nothing more.

This is how the trap works: You build a trip hazard out of wire and sticks. You then set it up behind a door. But you don’t just hang a grenade here. That would give the stumbling gamer too much time to run away.

Instead, you pull the grenade’s pin before attaching it and place it on the ground for 2 seconds. Now you can quickly pick it up and attach the pin. Only now do you hang the grenade on the trap.

If a player stumbles over the wire, he has only two seconds instead of four seconds to escape from the explosion radius – that is almost impossible.

Make sure, however, that your opponent does not die in the explosion if he is wearing protective clothing such as armor or a military helmet. Expect to only pass out for about 50 seconds.

What do you need for the trap? As with trap number 1, you will also need a trip hazard and a grenade. But now there is also a lockpick that you use for a really bad tactic.

This is how the trap works: This trap works in almost all buildings that are in DayZ. The trick works best with buildings that only have one entrance. As an example, let’s take a normal military barracks, the elongated ones, with a bathroom in the hallway.

Should a player stumble, he will try to escape straight away. But since you locked both doors, he won’t get very far. Too much time has passed before he turns around and flees the main entrance: Boom, and your opponent lies unconscious or dead in the hallway.

The specialty of this trap is that you don’t have to cook a grenade beforehand. The risk of descending into DayZ hell when setting up the trap is therefore minimized. What you need for the trap: This trap requires the least inventory, but the greatest luck. On the one hand, you have to find a land mine, on the other hand, you require a car that players can get into.

This is how the trap works: You are looking for a car that players can get into. The vehicle doesn’t even have to look like it is driving.

Now you place the landmine under one of the wheels so that it is difficult or, at best, not to be seen at all. If a player now sits in the driver’s seat of the car, the landmine is ignited immediately and switches off the player in the vehicle.

Your victim’s fellow players will also be hit by the mine explosion. The radius of the explosion is a good 3 meters. Presumably, the other players will pass out and won’t die, so pay attention again and try to follow up on one. What you need for the trap: You need a trip hazard, a grenade and a land mine. What starts out like a bad hunter joke is by far one of the deadliest traps in DayZ.

This is how the trap works: You place another trip trap with a grenade behind a narrower door. Once installed, you should be careful: You are now placing a landmine in order to prevent the tripping hazard. This can trigger it if it is placed too close to your tripwire trap.

If a player stumbles over the wire, the trip animation will automatically catapult them into the land mine. If the landmine ignites, your opponent becomes unconscious, but a few seconds later the grenade also ignites and gives him the rest.

In case you don’t have a landmine at hand, you can also use a bear trap. The same principle applies to this, but the player is thrown to the ground when he is conscious and can watch his demise. What you need for the trap: You will also need a trip wire and two grenades for this trap. This time, however, the preparation is a bit more risky.

This is how the trap works: Before you start setting up the trap, you have to damage one of the two grenades. It has to get the status “Badly Damaged” and you can do that by shooting the grenade or heating it in fire.

However, you have to be very careful with the second method, as grenades in DayZ tend to explode if you heat them for too long.

Now place a trip hazard and grenade on the door of a building or room. Simply put the damaged grenade on the ground a few meters away. Should a player stumble and trigger the first grenade, he will flee forwards again.

This time, however, the double blast radius awaits him. If the first grenade explodes, the second activates within a few milliseconds. With this chain reaction, you can theoretically smoke out an entire building. These are the best places to set traps in DayZ

Not every place or building in DayZ is suitable for setting up the 5 deadly traps. In return, there are some positions where trapping works particularly well:

Where are traps effective? Now the question is, where do you think our 5 deadly DayZ traps would be particularly effective or do you maybe even know other traps? Let us know in the comments.