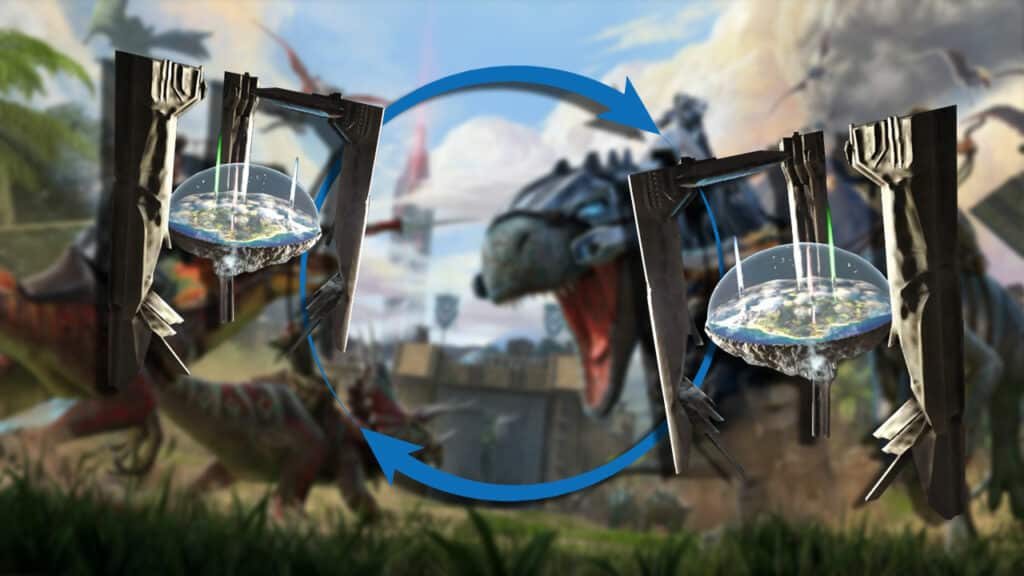 ARK: Character, Dino, and Item Transfer Between Official Servers – How it Works!

In our guide to dinosaur, character, and item transfers between the official ARK: Survival Evolved servers, we explain how you can upload and download them from the online database and what other things you have to consider.

Transfers are good for this: If you play on one of the many official servers and want to switch to another because maybe some of your friends are playing there, there is a transfer. You can basically transfer dinosaurs, items, and your complete character to another server. Note, however, that you can only switch between servers of the same type, i.e. from PvE to PvE and PvP to PvP.

This is what you have to do for a server transfer:

In order to transfer dinosaurs, your character, or items, you must first get to one of the three obelisks. There you will find a platform with a terminal in the middle. Go to the terminal and interact with it. This will open a window in which you will see the screen for spawning the world bosses or guardians.

In the upper left corner, you will find a button called Transmit ARK Data, which you press.

A window with options should now appear on the right:

ARK: How to Transfer Items

On your screen, you will see “ARK Data” on the right. There, you can now upload the items that you want to transfer.

A timer will be activated on the item you dragged into “ARK Data”, showing you how long your items will remain stored. If you cannot download them within the timer, they will be irretrievably deleted and not replaced.

ARK: How to Transfer Dinosaurs

So that you can also transfer your dinosaurs, you have to place them in the circle on the ground so that the obelisk can recognize them.

Now open the menu again, but select “Creatures” in the right window, which is to the right of “Ark Data”.

Your tamed Dinos will now be presented to you in a list from which you can choose the Dino you want to upload. You confirm your selection with the symbol of a dinosaur footprint, above the list on the right.

Once you have clicked on the footprint to upload, a message will appear that your Dino will be deleted from the current server and will lose its entire inventory, including its saddle. However, you can upload his inventory via the item transfer and take it with you.

ARK: How to Transfer Your Character

To transfer your character, at the Obelisk, open the menu again, but select the “Travel to another server” button located in the middle of the menu, under the “Transmitter” tab.

A list of servers should now open for you to choose which one to join. If you have chosen a new server, click on it and transfer your character using the “Join with survivors” button, which is located at the bottom right in the middle.

In the new region, you can spawn in your bases if you have built one before. Otherwise, you have to spawn somewhere on the map.

After you have spawned again, go to an obelisk, a city terminal or with the transmitter and download your Dinos and items again via the same menu.

If the connection is lost during the transfer, your character is not gone, you will get it back as soon as you connect to the server you wanted to transfer to and download it there.

ARK: How to Craft a TEK Transmitter

Instead of the obelisk, you can also use the TEK transmitter to transfer your items and Dinos.

You can craft the TEK Transmitter in the TEK Replicator using the following resources:

In ARK: Extinction, instead of obelisks, so-called “city terminals” are distributed, which, apart from the world boss fights, have the same function as the obelisks and where you can carry out your transfers.

Other worlds without obelisks