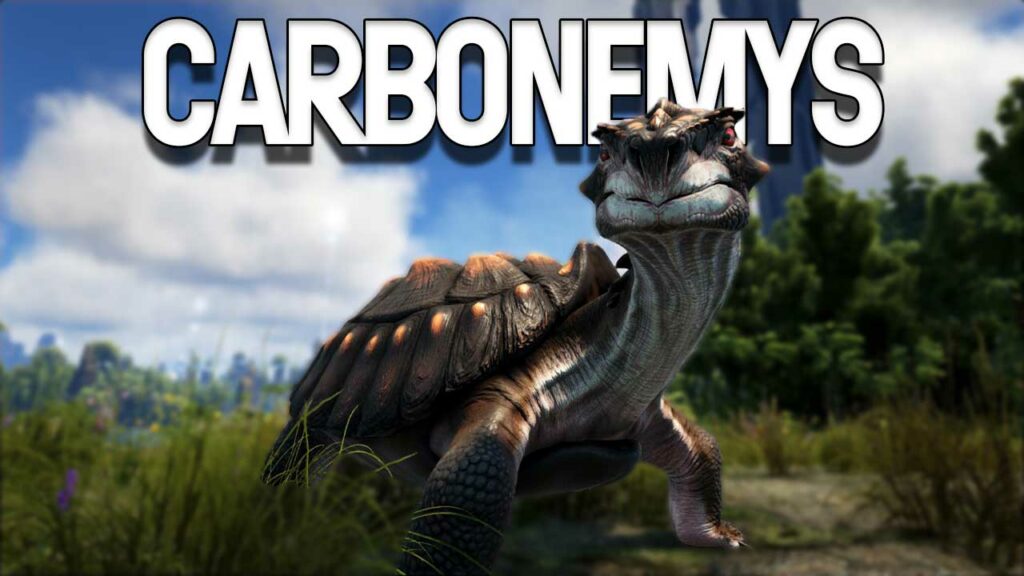 ARK: Survival Evolved: Carbonemys – How to Tame, Feed and Breed!

Find out everything you need to know about the Carbonemys in our ARK: Survival Evolved guide. But also how to catch it, tame it, feed it, and breed offspring too.

You can find the Carbonemys walking at the beach or swimming in the water on all ARK Maps.

This is the Carbonemys in ARK: Survival Evolved

Appearance: The Carbonemys is a giant tortoise whose shell is rather spiny than smooth

Wild: Like most herbivores in Ark, the Carbonemys has a passive temperament and will only attack you when you hit it first. However, due to its slow speed, you can quickly escape on land. Depending on the Carbonemys level, a fight can last a long time because its shell lowers the damage it gets.

Domesticated: Once you have tamed your Carbonemys, you have a mount for land and also for the sea, rivers or lakes, where it is significantly faster than on land. How to hunt the Carbonemys: Since the Carbonemys is very slow on land, you can easily shoot it with a bow, crossbow, shotgun, and tranquilizer darts while running from it. With a crossbow or shotgun, you can stun it quicker than with a bow, because they can break through thick skin and are also more effective when hitting the shell.

While aiming, you should focus on the body parts outside its shell, since you will do damage to these parts. If you want to tame a Carbonemys right at the start of the game, take a slingshot and smash rocks at its head until it faints

How to tame it: Once it’s unconscious, put food (scroll down) or kibble in its inventory and feed it. To keep the Carbonemys unconscious and the stun value up, it’s best to use the narcotic or narcoberries.

How to make the Carbonemys saddle

To craft the Carbonemys Saddle, you need to reach level 10 and pay 12 engram points to unlock the recipe. Now you need the following resources to craft it:

This is what Carbonemys eat in ARK

Once you tamed your Carbonemys, it is important to know what kind of food it likes to eat. Carbonemys are herbivores, which makes the choice of food easier.

How to breed Carbonemys in ARK

The breeding interval of a Carbonemys is 18 to 48 hours. How to Hatch Eggs: When you get a fertilized Carbonemys Egg from a successful mating, hatching begins. For this, the ambient temperature of the egg should be between 30 °C and 34 °C and within the Egg-Incubator at 32 °C. According to standard settings, the little Carbonemys baby hatches after about 1.5 hours. After that, it takes about 2.5 hours of your attention, during which you keep putting food in its inventory.

Once it gains juvenile status, it can feed itself from troughs on its own. The entire ripening time takes about 23 hours.