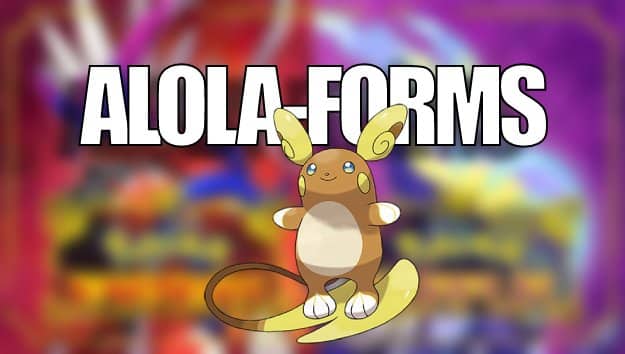 Since the seventh generation of Pokémon, there are the so-called regional forms, i.e. forms of a Pokémon that only exist in a certain region. In this guide, we will show you all the regional forms of the Alola region in Pokémon Scarlet and Violet.

The regional forms of Pokémon are created by the respective Pokémon settling in a new habitat and adapting to the new environments there. These new living conditions can be changing weather conditions, new eating habits, or new threats from other Pokémon.

Thus, regional forms may not only have external differences, but in some cases new behaviors, the development of new abilities and attacks, or completely new strengths.

Tip from our author: “You want to breed Pokémon yourself? No problem, thanks to our guide on eggs, hatching and breeding!”

All Alola forms in Pokémon Scarlet and Violet

In the new part of the series Pokémon Scarlet and Violet, you can encounter a variety of new regional forms. We’ve rounded up all the forms in the Alola region for you:

The Alola Raichu, unlike a standard Raichu, has rounded ears, an equally rounded and larger tail, and different color combination. Instead of the familiar mix of yellow and orange, the Alola Raichu comes in brown and yellow. The eyes of the Alola form shine bright blue.

The Alola Form of Diglett differs mainly in color. This is darker than a Standard-Diglett. In addition, the Alola-Diglett wears three blades of grass on its head.

The Alola-Dugtrio looks extremely funny. While the standard-form consists of three individual Digletts, the Alola-Dugtrio has fancy blonde hairstyles on all three Digletts.

With Meowth and his Alola-form, the color difference is also very noticeable. In the Alola-form, Meowth appears a soft thin purple.

Persian seems to have taken its cue from Meowth in its evolution, or adaptation, in Alola. Persian has also changed its color to a soft purple. The overall stature appears slightly smaller, but more compact.

Grimer definitely lives up to its name in Alola. In its regional form, it glows a disgusting green with a yellow stripe across its mouth and the back of its head.

Muk, the evolution of Grimer appears like a colorful dog in its Alola-form. One the otherwise just purple slime glob is striped pink, yellow, blue, and green in Alola.