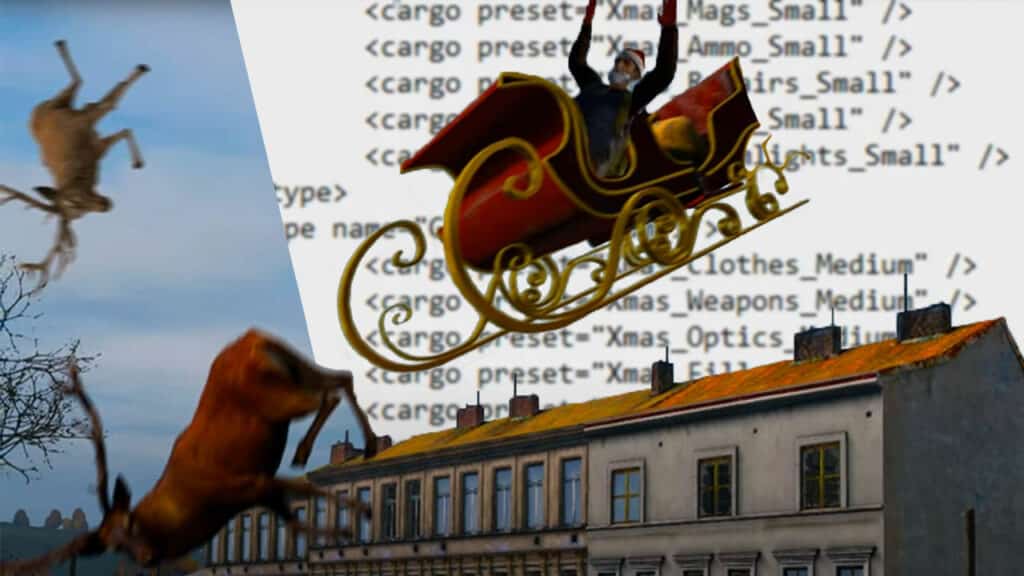 DataMiner find references to the DayZ Christmas event and the Bow

DataMiner were busy again and found information about a Christmas event in DayZ Update 1.15. In addition, the Improvised Short Bow is likely to be brought back into play.

Warning: This information is leaks and guesswork. Whether they come into play that way or at all is not yet certain.

This is the leak: The YouTuber WOBO took a closer look at the game files from DayZ Update 1.15 and found hidden elements. These indicate that there will be a Santa crash site for this year’s Christmas event for the first time. You can imagine it like a helicopter crash, just with Santa Claus’ sleigh.

This crash is announced with a Christmassy tone and the crash site is brightly lit. But watch out for Santa-Zombies. You can see the whole thing in action in the video from WOBO.

You can also find gifts in which you can find various items. Among other things, a Christmas beard and hat.

The Improvised Short Bow is coming back?

The YouTuber also believes that the Improvised Short Bow could come back into the game. In the loot table of DayZ 1.15 there is an entry for the feathers, which are currently not dropping.

How is that related to the bow? Quite simply, the feathers have only one use. For making improvised arrows. The Bow is one of the items that the community longingly wants back. For over 2 years now, players have been waiting for Bohemia to implement the Improvised Bow back into the game.

Whether these changes will come into play remains to be seen at Christmastime. The event usually starts around 3 weeks before Christmas, i.e. at the beginning of December. We stay tuned for you!