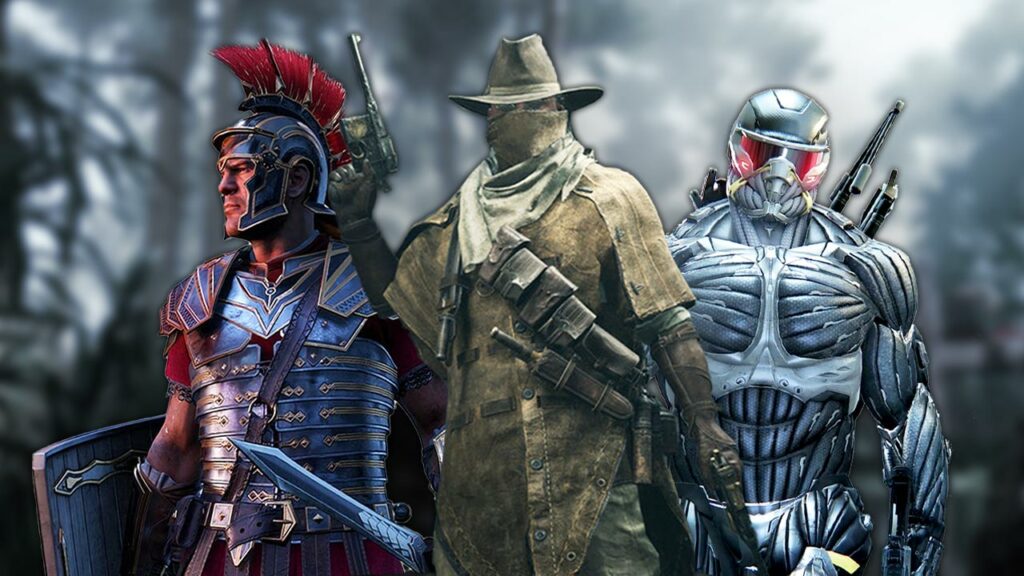 In a new trailer for Hunt Showdown, the developers at Crytek apparently present new content for the horror shooter, which consists of a curious mix of sci-fi, ancient Rome and dinosaurs — But what’s behind the new trailer?

What happened? A few minutes ago, on March 31, the developers of Hunt Showdown uploaded a new trailer for the game. It’s called “Legends of Crytek” and apparently shows three new hunters for the shooter. But the story behind it isn’t quite that crazy, but it is funny!

What does the new trailer show? In the latest promotional material for Hunt Showdown, you can see various characters that you’ve surely seen before. Together with a hunter known from Hunt, a nano-suit and a Roman centurion also walk through the picture. In general, you can spot familiar characters from all Crytek games:

Prophet – Crysis: The man in black and red glasses is Prophet, the protagonist from Crysis 2 and Crysis 3. In Crysis, you fight an alien threat that only you can see coming.
Marius Titus – Ryse: The Roman Centurion is the main character from the Xbox One launch title Ryse: Son of Rome, where you fight barbarians as a Roman.
Laika – Robinson: The little cuddly dinosaur in the trailer is from the VR title Robinson: The Journey, in which you crash-land on a dino planet.

At the end of the trailer, there’s a view from a high castle wall. Apparently, someone climbed the wall in VR. Unfortunately, this doesn’t mean that there will be a VR mode for Hunt Showdown anytime soon. Instead, the last section of the trailer is just another reference to a Crytek title, here called The Climb. In The Climb, true to its name, you climb steep cliffs and buildings.

What is this all about? As most clever Guided readers could already guess, this is not a serious trailer. The guest appearances of the Crytek mascots are merely an April Fool’s joke.

Nevertheless, Crytek is not too early with this, but is probably thinking about the players in Oceania. In New Zealand and Australia as well as East Asia it is already Friday, April 1st. So here we are watching their international April Fool!