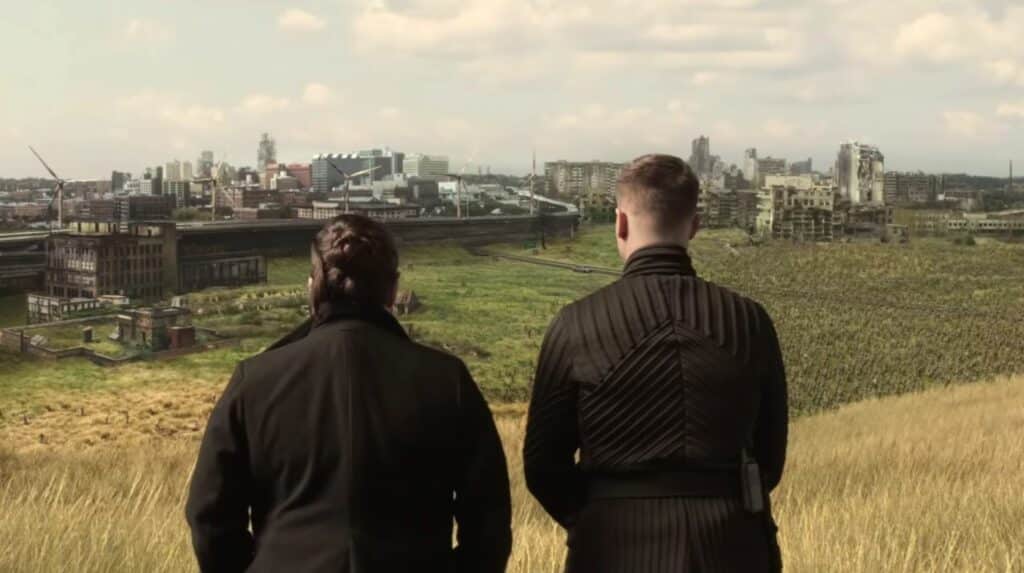 TWD World Beyond: The Real Plan of CRM and Secret Behind Project “V” Revealed

The latest episode of The Walking Dead World Beyond came out today and it reveals the big plan the CRM is pursuing. We’ll tell you which one it is and which secrets you might have missed in the current episode 7.

What has happened so far? The Walking Dead World Beyond is more likely to be parked on the sidelines by fans of the TWD universe. Nobody thinks this series is really good, but it is a source of information about the secret CRM and CR as well as Rick Grimes and his fate. In the current episode we learn, among other things:

What is Project V? This CRM operation was briefly teased to us for the first time in episode 5. At that time, however, we did not know what the letter V was or what this operation was supposed to be.

Episode 7 finally reveals more and reveals, among other things, the code name “Voltin”. This Project Voltin is a secret CRM operation – beware – of which the CR, i.e. the Civic Republic, has no idea.

The research on the green gas, which turned out to be chlorine gas, is hidden under the code name. Like Dr. Bennet says there is no explanation for the green color – it must contain an additive. This addition also ensures that the transformation from a dead to an undead takes longer, at some point even prevented.

This is what the CRM plans: The CRM destroyed the Campus Colony in the first season. Around 10,000 people lived here. So far we only knew that this attack was planned by the CRM, but worried both the soldier Barca and CRM chief Elizabeth Kublek.

However, the overarching plan calls for even more sacrifices. As we learn at the end of the 7th episode World Beyond, CRM wants to break all alliances and destroy every large gathering of people. Portland and Omaha are therefore doomed to die just like the Campus Colony.

Why the CRM plans this remains a secret for the time being. Reasons for this could be:

We personally like the latter theory because the characters even scatter hints for it.

The Civic Republic has no idea what the CRM is doing

We have these clues: In the current episode of The Walking Dead World Beyond, Dr. Bennet’s partner Lyla Belshaw and his daughters talk about the goals of CRM. She also tries to explain to Iris and Hope why she had no choice but to participate in the research.

The scientist, who was demoted to a test subject at the end of Season 1, reportedly threatened the CRM with divulging all the Civic Republic’s plans. Dr. Belshaw also tells us that the Civic Republic has no idea what’s going on outside its walls.

This shows that it is not the Civic Republic that is evil, only its renegade military, which is clearly not researching a cure, but a weapon of mass destruction.

The real leader of the CRM: Neither Kublek nor a politician of the CR is in command of the military. A certain Major General Beale is the leading figure behind the scenes that even Kublek seems to be afraid of. But who is behind it is absolutely unclear. A new character or an old friend?

Where’s Rick? The new clues at least give an idea of ​​where Rick Grimes is. He is not part of the CRM and is probably not in their captivity either. Much more, he is with Civic Republic, not CRM. Since he is a B-person, he is traded as a leader.

A republic needs strong leaders. Rick could therefore be active in politics, but with his hands tied and is Jadis maybe even on his behalf at CRM in research facility 1?

These and more theories will hopefully be revealed in the season and series finale of The Walking Dead World Beyond. But more important now is: what do you think, where Rick is, what the CRM is planning or who is Major General Beale?

Star Citizen: What to Expect at CitizenCon 2022

Tower of Fantasy: This is the New SSR Character Cobalt-B

Diablo Immortal: How and When Does the Haunted Carriage Event Start?