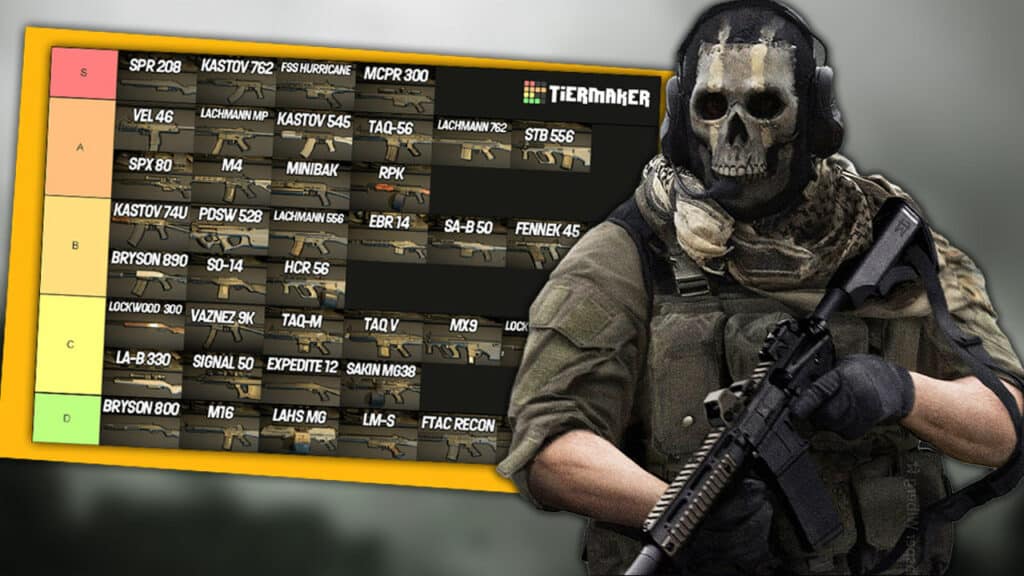 In Call of Duty: Modern Warfare 2 there are over 50 different guns, our author Kevin Link has divided them for you in his very own tier list and presents you with the best weapons in MW2. (Updated on November 15!)

What is a tier list? A tier list is a classification of, for example, weapons (or other things in a category) into different levels. The best weapons are classified at the upper end, so they are mostly marked as S. These lists typically go from A to D. The Further down a weapon is, the more useless it is. Mostly animal lists are a personal taste of the creators, in our case, we tried to collect a lot of data and create a general animal list.

There are already 54 weapons in many categories in Modern Warfare at the release. You unlock some weapons per level. But many of them are only playable if you level other guns on the same platform beforehand. Our tier list does not include the time required to unlock each gun. For the best weapons to use early on, we wrote this article on the top 5 weapons for release.

All Weapons from the Modern Warfare 2 Weapon Tier List

The classification of weapons is not only based on the damage they cause. In addition to the visible values of a weapon, we have also included the availability and the possibility of attachments in the MW2 weapon tier list. That’s why, for example, the FSS Hurricane ended up so high up, as well as the SPR 208. The latter can currently be found in almost every multiplayer match and causes some frustration for the person on the open side of the barrel.

While the weapon tier list from Modern Warfare 2 above clearly shows which weapons occupy the top tiers, this section recaps the top 3 primary weapons with an explanation of why they are the best. Not all S-class weapons will be found in this list since we only present the 3 currently most potent weapons here.

The Kastov 762 is the first weapon of the Kastovia platform. So when you reach level 21, you can already play it. However, you’ll have to unlock many of the attachments with the rest of the platform’s weapons.
Besides a lot of damage and a solid rate of fire, the Kastov 762 also comes with a clean rear sight. So even without an extra sight, you can precisely finish off your opponents. On the other hand, the biggest negative is the relatively high recoil. However, if you get used to it, you will have one of the most powerful weapons in your hand.

The FSS Hurricane is part of the M4 platform and has been available since the beginning. After the popularity of the weapon grew and grew already in the beta, it is still high on the popularity scale now.
Low recoil, a large magazine, and a solid rate of fire. Everything an MP has to bring along. With the FSS Hurricane, you are quickly on target and generally have good mobility.

The SPR 208 is a DMR that you unlock at level 7. It is the first weapon of the Bryson Long Rifle platform. All weapons of this platform belong to the DMR or sniper rifle class.
Currently, one of the most popular weapons in Modern Warfare. Probably, there is hardly a match in which no one plays the SPR 208. Even without attachments, you can send players to the brink with just one chest hit, depending on the distance. Especially the low aiming time is one of the biggest strengths of this weapon.

Have you had different experiences, and would you classify the weapons from Modern Warfare 2 differently in the tier list? Tell us with a vote!