Lost Ark: 12 Tips You Better Know Before Starting the Game

Lost Ark doesn’t exactly hand out its game mechanics on a silver platter, and often Guided writer Kevin has come across shortcuts, tricks, and just plain helpful mechanics that he wishes he had known sooner. In this article, we’ll tackle 12 things you should know as a Lost Ark player before you set out on your adventure.

Does Lost Ark hide info? No, hidden information reserved for you as a player is not the problem. Rather, as players, we simply too often overlook the tiny nudge that nudges us towards these mechanics or tips. Because Lost Ark doesn’t care how optimized your playthrough is, I’ll take on the part of loving parent and prepare you for the hard future!

What to expect: In this article, the focus is on game mechanics. Among other things, I’ll tell you how to level up faster, which quests you can safely leave behind, and give you helpful tips on how to optimize your character and rewards!

1. leveling is faster without side quests

In Lost Ark, you can leave most quests alone if you only want to increase your character’s level quickly. No single side quest will bring you many experience points. They serve to better establish the story of the world and intersperse small storylines.

If you want to get to level 50 quickly, start by skipping the prologue. After that, take only the main quest and ignore all others — except for:

Chain and Adventure quests, each of which is indicated by a yellow chain or purple compass arrow. You should definitely accept these quests, as they will give you various potions that will give you boosts or unlock features that will help you later in the game.

2. choose the class that you enjoy.

In most MMORPGs, classes are locked into their domain. Whether tank, healer, or damage dealer (DPS), classes are rarely balanced. Often friends compete to see who can dish out more damage — at least in mine! But in Lost Ark, it doesn’t really matter which class you choose. All 15 classes in Lost Ark can go their own way just fine, deal enough damage, and can be upgraded and specialized in a variety of ways.

There simply isn’t one best class, so you should play the one you like best. Do you like heavy armor and big two-handed swords — just like any player with taste — or do you prefer to give the enemy a run for their money from a distance? It doesn’t matter, because balance is more sophisticated in Lost Ark than in any other MMORPG, even in PvP your class will have a place.

3. cultivate the right relationships every day

In Lost Ark you can build relationships with different characters. The good friends you make will give you rewards for their daily tasks. If you complete their quests every day, the value of the reward will increase.

Moreover, you can later invite them to your own island, which you build and improve yourself. However, not every NPC is equally good. Some are more valuable friends than others, literally.

Many NPCs in Lost Ark reward you with trash after a completed quest, while others reward you with pure gold. When you first talk to NPCs, see what you can expect from them before investing your time in them. 4. teleporting across the sea instead of sailing a ship

While you are on a continent, you can teleport to specified locations on the same continent for money. However, to get to another landmass, you’ll have to take a sailing ship and sail across the dangerous sea. Mastering the sailing requires a few more tips and tricks. But to be precise, you can at least partially bypass this.

In Lost Ark, every player has a Bifrost teleporter by default. You can set it up and teleport there again and again. You can get more Bifrost keys by completing area tasks or by using Lost Ark’s subscription model.

You can now set 3 waypoints to which you can teleport at any time. The best way to do this is to choose three different continents, on which you travel most often. Or place your Bifrost next to important NPCs. That way you save yourself miserable long sailing trips. 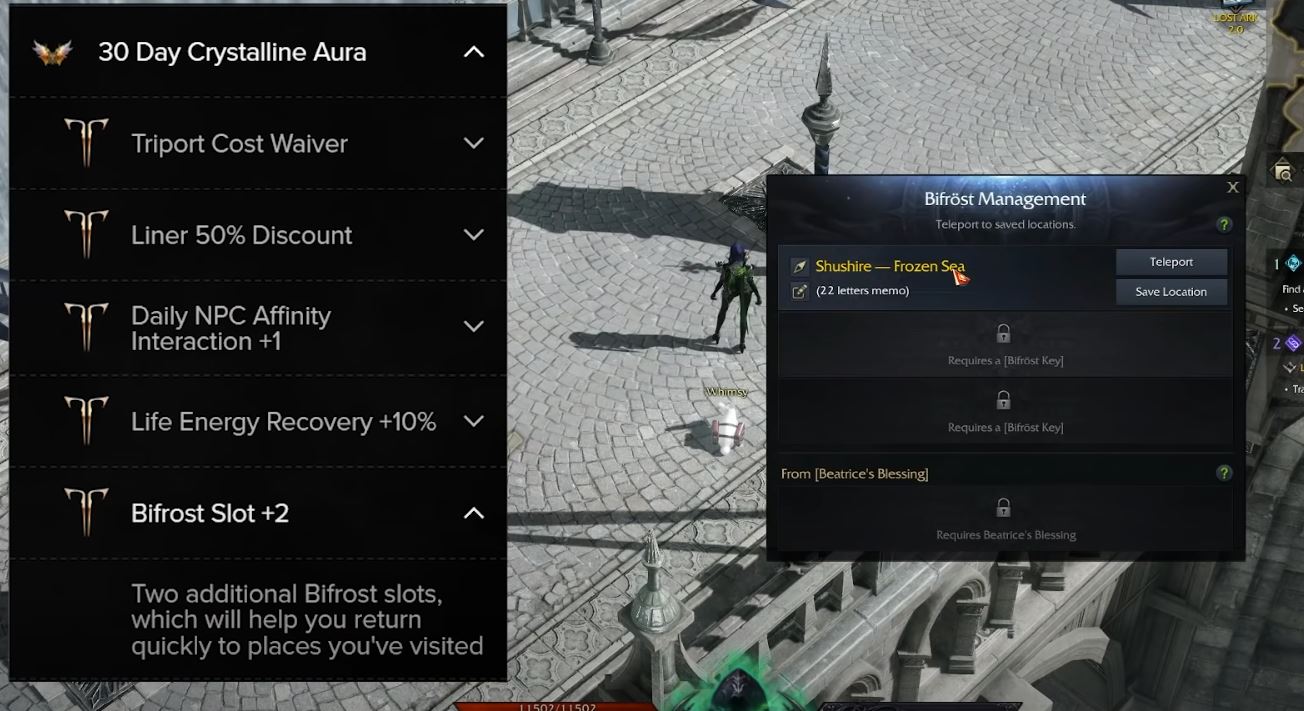 But be careful: The cooldown for a Bifrost is quite long (about 2 hours). So you should keep an eye on everything and make sure that you have completed every task on the spot. Otherwise, you’ll have to grab the sailing ship again and go there.

5. speaking of ship: this is what you should pay attention to when sailing.

Lost Ark skimps on information about your ship’s voyages. Yet there is so much information I wish I had known before I started. Among other things, different ships are suited for different situations. On each voyage your sailing ship takes damage.

You have to repair the damage with resources and you can only minimize it by choosing the right ship and having the right crew on board. Example: The Icebreaker is particularly well suited for icy waters. Now add a crew with appropriate bonuses against ice damage and you’re good.

In short: Just as you always measure the tire pressure, oil level, etc. on a long car trip, you have to plan every ship trip in advance in Lost Ark. Ask yourself the following questions and assemble your ship and crew appropriately: In Lost Ark you can customize your user/operator interface to your liking. One example of this is the distracting overlay map that you bring up by pressing TAB. By default, it’s right in the middle of the monitor, which makes it difficult to keep track of your character in combat.

If you go treasure hunting in Lost Ark, you will quickly reach the limits — map limits, to be exact. The developers don’t let limits of playable areas stop them. Some collectibles like Mokoko seeds are extremely well hidden.

For example, some walls can be destroyed, entrances to caves are hidden behind dense undergrowth, and our favorite: Mokoko seeds outside the map. In some places in Lost Ark you can simply walk through a wall and suddenly run across the black map border just to collect some seeds!

By the way, we have a gigantic and growing compendium on all Mokoko seed locations in Lost Ark. There are more locations linked in the article. 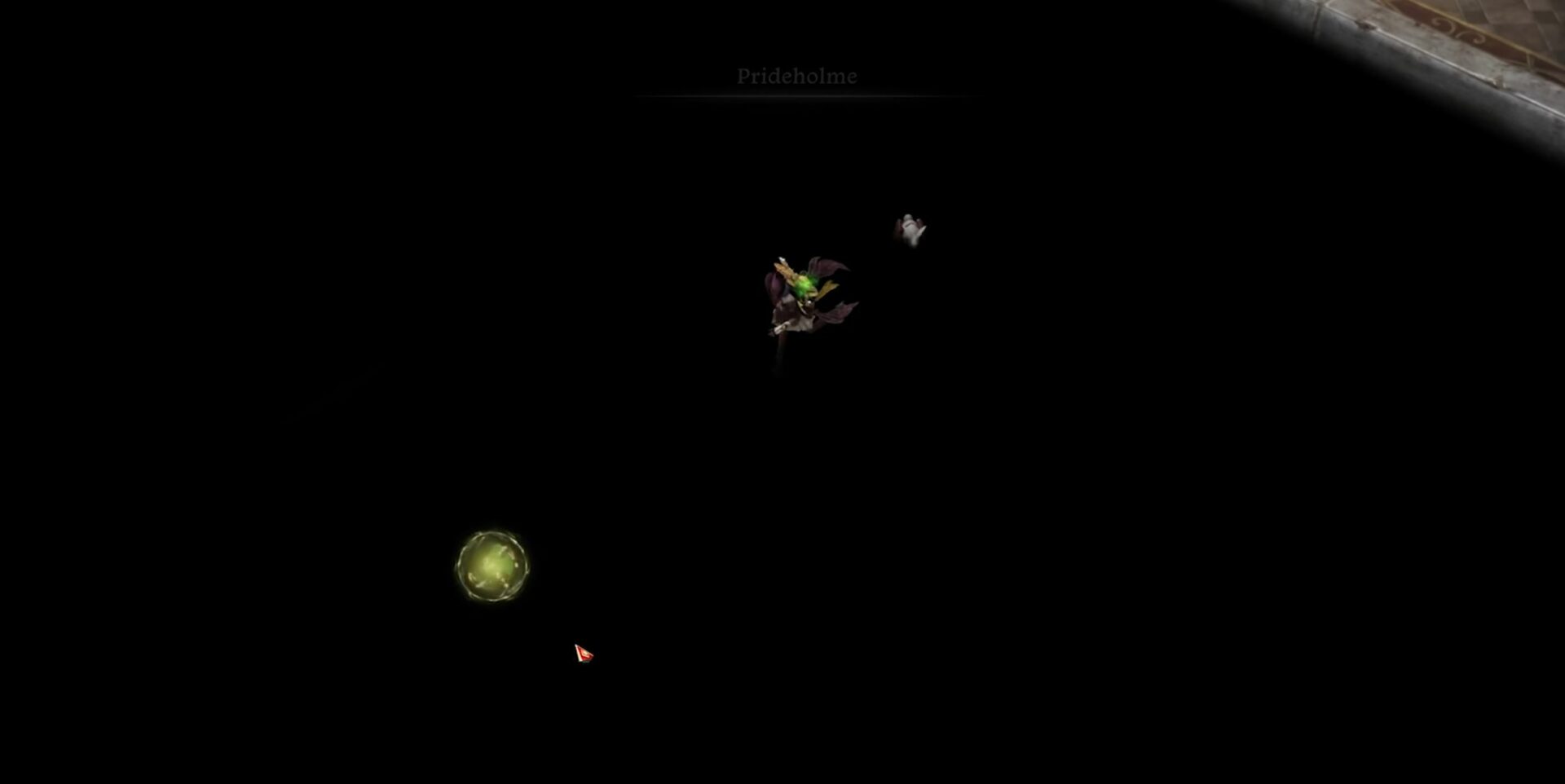 8. dodging properly is something you have to learn

You can dodge in Lost Ark in two ways. One is the usual dodge, with which you flee from an attack. Your second dodge option is to help your character get back to his feet faster after being knocked down. Both dodge options have their own cooldown.

The cooldown for your dodge is quite low, the one for getting up is a few seconds higher. Therefore, you should always dodge only when you are sure that an opponent’s attack can cause devastating damage. Your get-up dodge — word creation of Guided.news (TM) — should also be used cleverly.

If an opponent throws you to the ground but doesn’t follow up with an attack, you’d better wait! Only if there is a threat of an attack that would hit you if you were lying down, use your stand-up dodge. Both dodging methods are located on the space bar and are automatically swapped by the game.

9. healing potions are more valuable than you think

At the beginning of your journey in Lost Ark, you get tons of healing potions. So apparently they’re not worth much and can be burned, right? Nah, better not, because Lost Ark doesn’t tell you that you won’t get these potions thrown at you later in the game. Quite the opposite, they become very rare.

How to get healing potions in the endgame: If you ever run out of potions, you’ll either have to buy them expensively at the auction house or make them yourself. To brew a healing potion, you need your own island. In your fortress you buy the blueprint, pick up the materials and start brewing in the workshop. 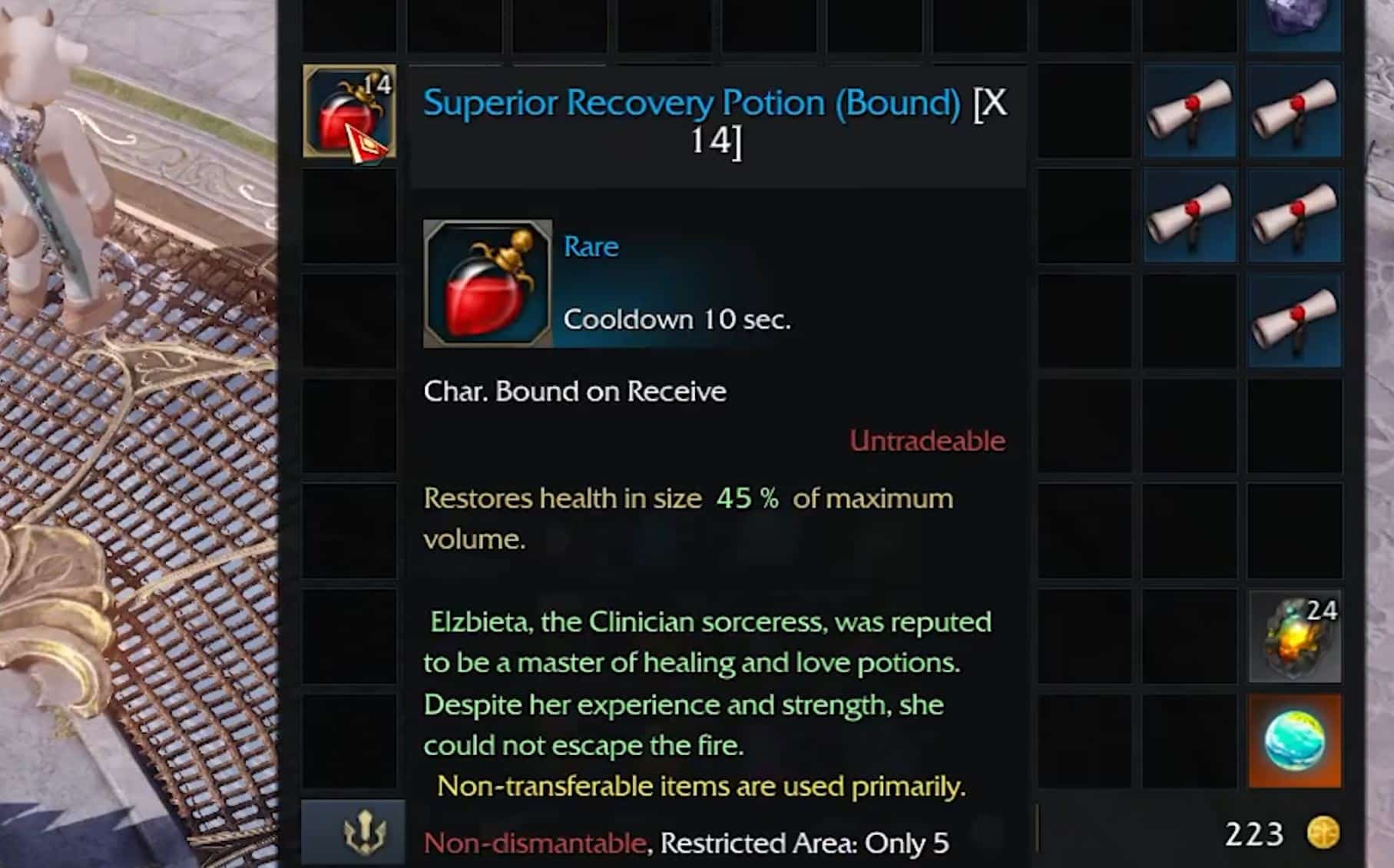 Quite early in Lost Ark you get your own island and fortress. As described above, you can build your own items, weapons and armor on it and improve your buildings.

You collect raw materials for the improvement in the open game world. When you mine them, you can also get a Platinum Ticket by chance. You should keep them safe, because they will allow you to enter a special instance that contains the most valuable materials in Lost Ark. You’ll have 15 minutes to mine as much as you can, after which you’ll fly out.

Another important building is the mission. In it you can send ships packed with AI sailors on a great journey. Among other things, they can participate in raids or events for you. The reward you get afterwards is less than if you go to the event yourself, but in return you don’t have to do anything. You can find out more about housing in Lost Ark in our big housing guide! 11. do not sell weapons and armor

If you sell your weapons, armor and other equipment items in Lost Ark to the merchant, you are giving away cash. You generate far more income by disassembling items and selling the parts. Normal weapons and armor break into “pieces” that you can then flog to a merchant for silver coins.

Disassembling items becomes really important in the endgame. Here you get items that, when disassembled, release far more valuable upgrade materials that you need to improve buildings, ships or equipment. 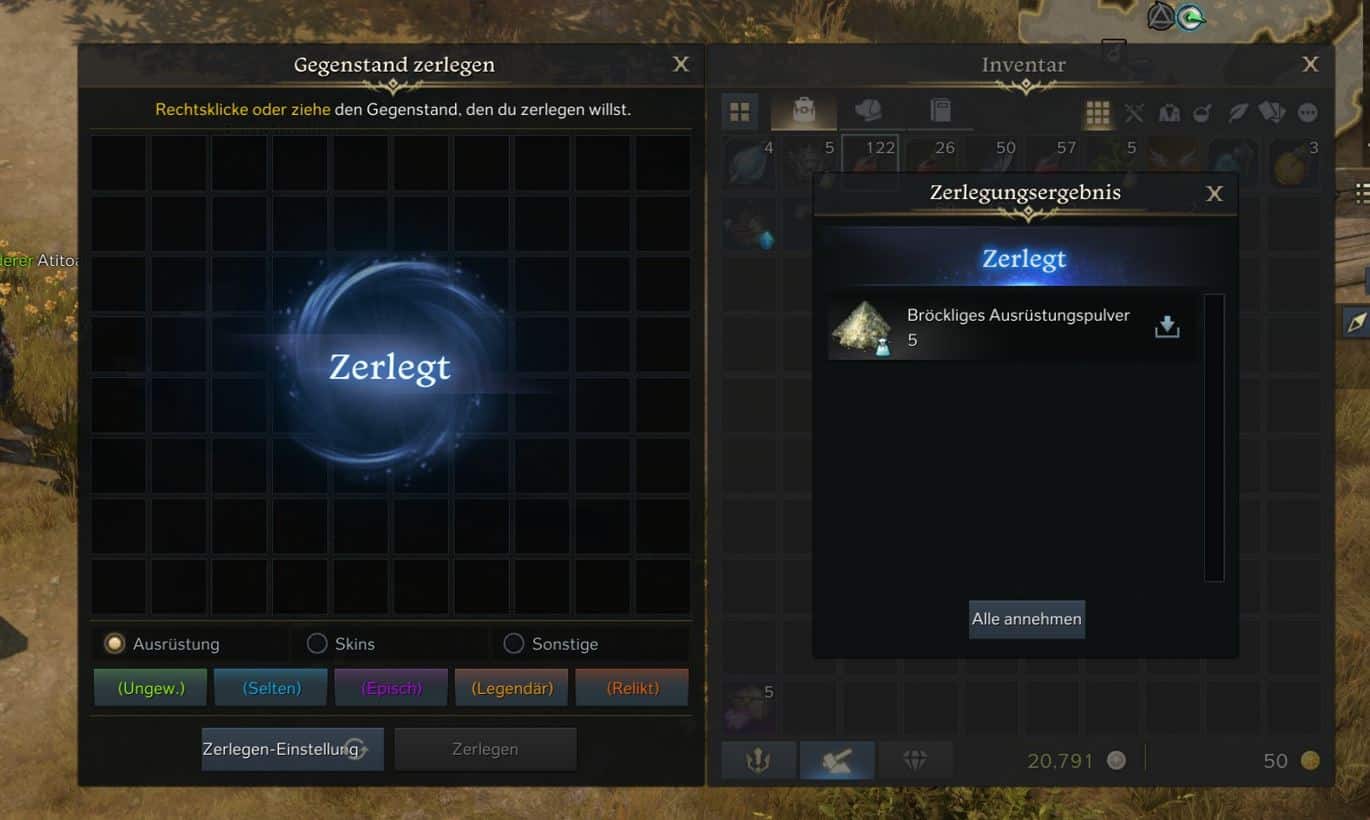 In Lost Ark you level up not only your character, but also your account. The latter is called Roster Level, is purple and grants you a reward after each level up. Even though this is certainly not the top secret tip par excellence, you can quickly forget about it in the course of the game. To see your reward, you simply need to click on the Squad menu item and then collect your rewards.

That’s it! Do you know any other tips and tricks that you would like to share with us or the other readers? To share with even more people, we invite you to join our community discord. Here you will meet what is almost certainly the best gaming community around.