Conan Exiles: Is it Worth Buying the Battle Pass?

The new update 3.0 Conan Exiles “Age of Sorcery” brings many great innovations to the game, including a Battle Pass. We’ll tell you if it’s worth buying.

As part of the Age of Sorcery expansion in Conan Exiles, you will have the option to purchase a Battle Pass, which will be partially paid for. In addition, the Funcom developers have introduced a seasonal model. This system is already known from other games.

In Conan Exiles, there will be a new Battle Pass for each upcoming season, which will run for about 13 weeks. This season is all about dark magic, which is also reflected in the Battle Pass rewards.

How the Battle Pass works in Conan Exiles

The Battle Pass in Age of Sorcery will not be entirely paid, but will also have free rewards. Regardless of whether you decide to purchase or not, you can climb the individual levels of the Battle Pass. Each level up brings with it a reward. However, most of the level rewards are tied to the paid Battle Pass, and only individual level ups also grant rewards in the free Battle Pass.

If you initially decide not to purchase a Battle Pass, however, nothing is lost by already gaining level ups. For example, if you have already reached level 30 in the Battle Pass and you buy it now, you will receive all rewards up to level 30 retroactively at once. In total, the Battle Pass contains 60 levels. The new update also gives you the possibility to change the look of your items. With the new illusion system in Age of Sorcery, you’ll be able to transfer the appearance of an item to another item of the same category.

To advance in the Battle Pass, you’ll have to complete the different challenges in it. These consist of different tasks: The progression within the Battle Pass is linear, which means that it won’t get harder to collect level-ups over time. This is to ensure that an average of two hours of play per week is enough to complete the Battle Pass.

What’s in the Age of Sorcery Battle Pass

One Battle Pass reward that will be available to everyone (so even the free variant) is (single-use) spell bottles. Each bottle consists of five units that you can use to cast one of the new spells. Besides these new bottles, you’ll get the following rewards in the Battle Pass:

What’s in the Age of Sorcery Battle Pass

One Battle Pass reward that will be available to everyone (so even the free variant) is (single-use) spell bottles. Each bottle consists of five units that you can use to cast one of the new spells. Besides these new bottles, you’ll get the following rewards in the Battle Pass: 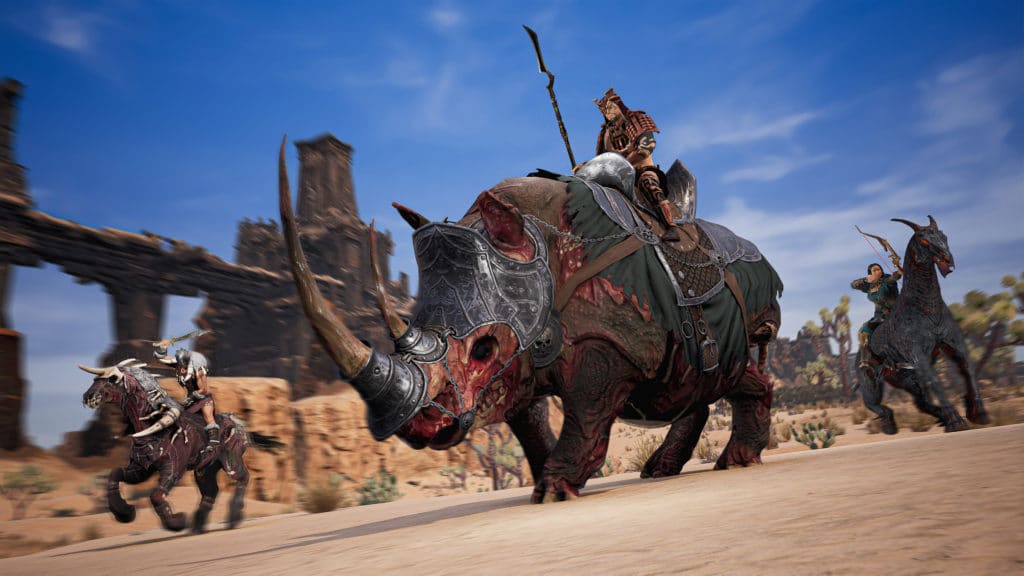 This is important: the Crom coins are a very interesting part of the Battle Pass. Every few level ups you’ll get several of these new coins. If you play to level 60, you’ll have enough of them together to buy the next Battle Pass. This method will be used throughout all upcoming Battle Passes.

This means you basically only have to buy the first Battle Pass and get all subsequent ones for free. Alternatively, you can spend your Crom coins in the bazaar to buy cosmetic items or various bundles.

The new Battle Pass, just like the future Battle Passes, is supposed to be a part of the story. Therefore, for every level you uncover, whether free or paid, you’ll be introduced deeper into the dark beginnings of magic in the Land of the Banished.

Our conclusion: The new Battle Pass is definitely worth it. At just under ten Euros, the Battle Pass isn’t expensive and provides a lot of cool cosmetic content in return. In addition, the possibility of securing the next Battle Pass for free with just two hours of play per week using the Crom coins won is convincing.