Grinding Gear Games has unveiled the new Path of Exile Challenge League in a live stream. There was also new information about Path of Exile 2 and Exilecon next year in New Zealand.

This happened: Grinding Gear Games presented the new expansion Path of Exile 3.19: Lake of Kalandra via Twitch live stream on August 11 at 10:00 p.m. German time. Once again, the community has seven days to decide which build to start the new league with.

This time more creativity is required than in the still current Sentinel league, because Lake of Kalandra has some balance changes, over 100 revised and 14 completely new uniques and new gems in its luggage. We have summarized all content of the new Path of Exile League for you.

This is how the league mechanics work in Path of Exile 3.19

In Path of Exile 3.19 you will come across a mirrored tablet in the areas of Wraeclast and later in the maps. This panel contains a certain number of spaces that you can add different reflections to. The further you advance in the game, the more free spaces you will find on the board. Once all slots are filled with reflections, you can open a portal to the Lake of Kalandra.

On the lake you must then face the manifestation of your reflections, each representing a challenge. For example, a reflection can represent a league mechanic such as Delirium or Harbinger, or it can also contain new challenges. The farther a reflection is from the entrance to the lake, the greater the difficulty and rewards.

From time to time, you may choose from a few options to customize your mirrored board. With this you can change the layout of your reflections or your lake as well as redesign your encounters and their rewards according to your wishes.

In the endgame, you also get the option to skip selected reflections, reroll, or remove them entirely, allowing you to make your boards more efficient. You can also save finished tablets to special items, so you can visit the lake at any time or sell your tablets to other players.

Each individual reflection on the lake contains its own rewards. However, there is also a chance that you can get a pair of rare rings or amulets via the “Reflecting Mist”. These items are exact reflections of each other, albeit with diametrically opposite modifiers. So the amulet on the right might give you something like “+189 to max health” but subtract you “-103 to max mana”. This means that the left amulet drains you 189 life but gives you 103 mana.

You can only take one item with you at a time. So, depending on what build you’re playing, the item’s buffs may be extremely helpful to you, while the negative modifiers won’t affect you significantly.

Path of Exile 3.19 introduces three new skill gems and one new support gem. Three of these gems are based on the themes of Lightning Damage and Shock, such as the new Magic Gem Lightning Line, which hurls lightning bolts at a target location.

In addition to the new gems, Lake of Kalandra is bringing 14 new unique items, including a league-exclusive ring that duplicates the effects of your other equipped ring. In addition, over 100 unique items have been changed so that they can now be used much better for leveling and even in the late game. 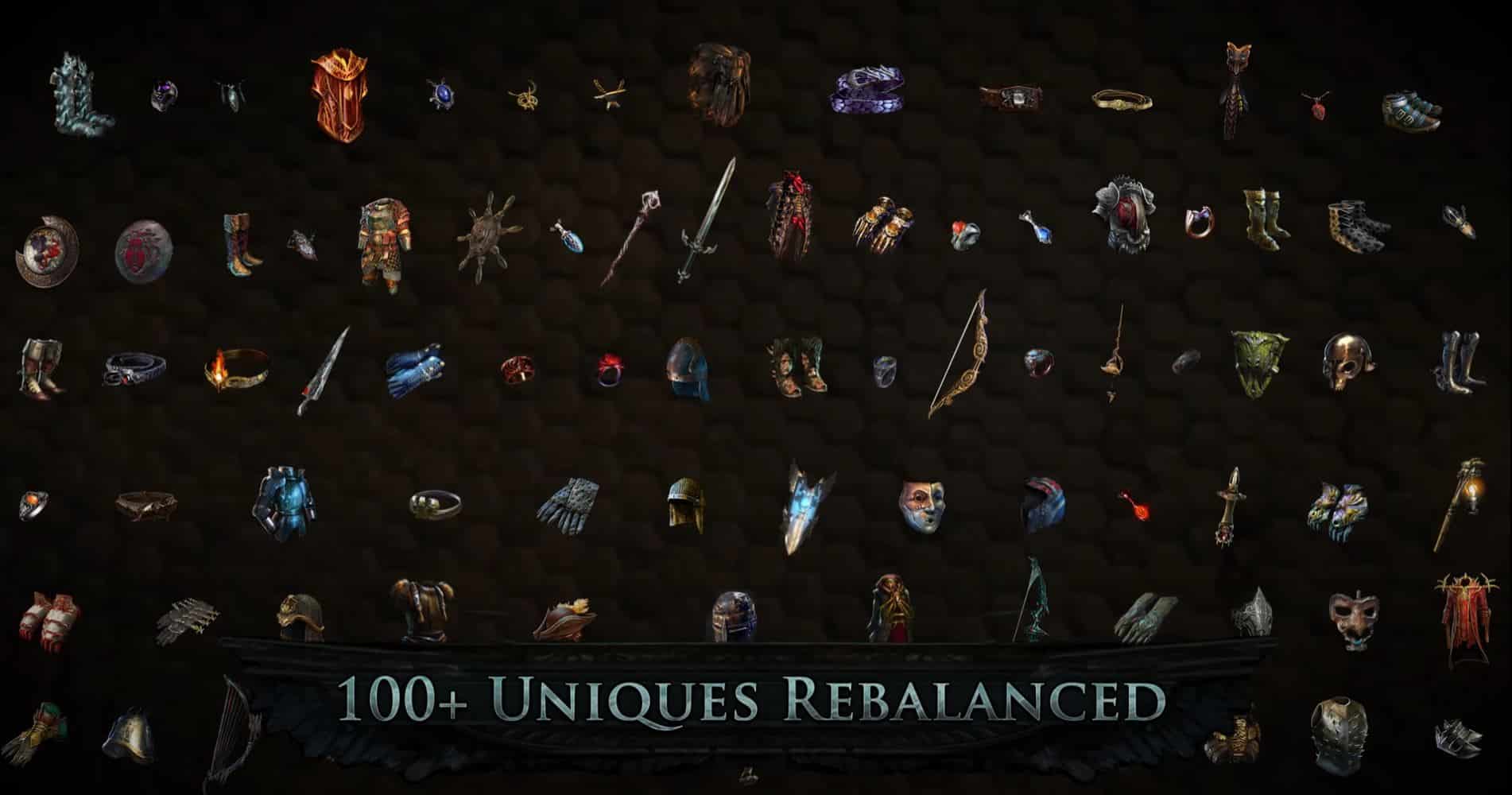 Also in 3.19 Path of Exile brings new content for the endgame. The so-called Atlas Memories offer you the opportunity to explore endgame content without having to expand your Atlas tree. In higher level maps you can find rare mementos that represent a series of memories from Alva, Niko, Einhar or Kirac.

With these memories from the various NPCs, you can run a specific sequence of maps. These particularly challenging and rewarding memories can either be applied to your atlas or sold to other players.

Along with all this new content, numerous magic and rare monsters throughout Path of Exile have been adjusted, as well as past league content, balancing the difficulty and rewards of Archnemesis modifiers, overhauling the Beyond mechanics, and also making major changes to the Harvest crafting system.

In addition, numerous balance changes have been introduced, such as a revision of the trickster’s ascendancy class and changes to minion items.

What’s next for Path of Exile 2?

Right at the beginning of the stream, Chris Wilson announced that ExileCon 2023 will be the date for the start of the Path of Exile 2 closed beta. Tickets for Exilecon 2023, taking place over the weekend of 29th and 30th July 2023 in Auckland, New Zealand, will go on sale at the end of August.

Would you like to join our community and discuss Path of Exile? Then join our new Discord server, we look forward to seeing you!