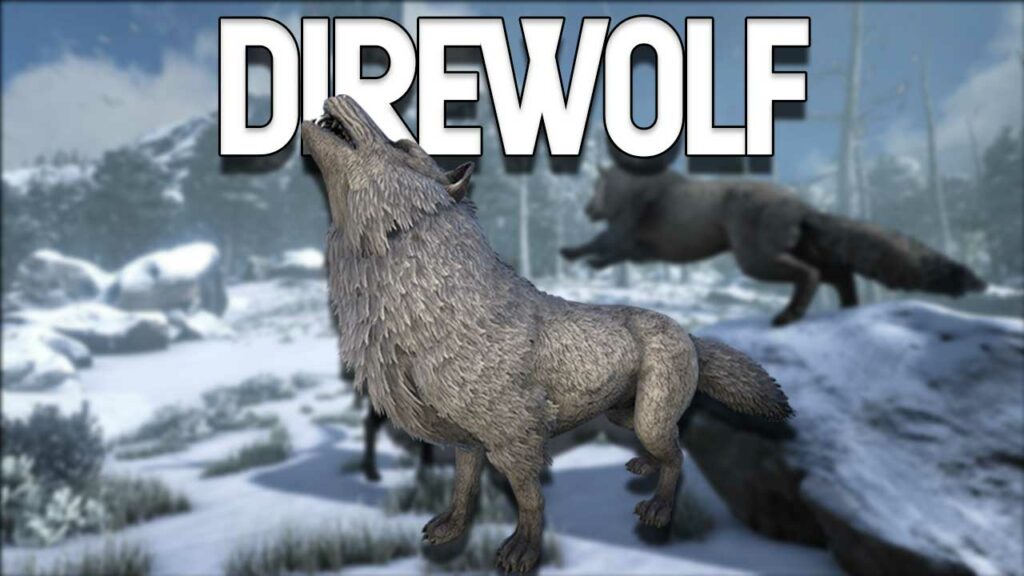 Find out everything you need to know about the Direwolf in our ARK: Survival Evolved guide. But also how to catch him, tame him, feed him, and breed offspring too.

The Direwolf is primarily found in ARK’s snow biomes, where he and a pack will attack anything that moves in his field of view. The pack bonus also increases the pack’s attack while lowering the damage they take.

This is the Direwolf in ARK: Survival Evolved

Appearance: The direwolf is an oversized wolf that you often find in ARK’s snow biomes.

Wild: The direwolf lives in packs of 3 to 4 of its own kind and together with them attacks everything that comes into its field of vision. So if you’ve attracted interest, the leader of the pack will howl, which gives all pack members a boost and initiates the attack on you. All Direwolves will then pounce on you to make you a feast – even your mount is not safe. Flying creatures are best for escaping, as wolves are extremely fast and will chase after you.

Tamed: If you have tamed a direwolf, you not only have a cuddly and fast mount, the direwolf gets a bonus in the pack. This bonus increases the damage of attacks by 5% per pack animal (max. 4 wolves per pack). The highest level wolf becomes the leader, which in addition to the damage bonus gains the ability to howl, causing the pack’s attack damage to increase by 50% and the damage they take from an attack to increase by 50% for 90 seconds 25% discount. How to tame the Direwolf in ARK

How to hunt a Direwolf: The Direwolf will attack you in a pack, so watch out for other animals nearby. For this reason, take enough bolas with you to establish the pack first. Once you have all arrested, you can now stun and tame them one after the other, or finish them off.

But you can also go to an elevated position, for example, a large stone, or directly on your flying animal and shoot at the wolves from a safe distance.

How to tame him: Once he’s unconscious, it’s best to put the kibble or meat in his inventory and feed him that. To keep the stun value up, it’s best to use anesthetic or narcoberries. Normally, the Direwolf shouldn’t need any extra sedation.

How to feed a Direwolf in ARK

Once you have tamed your direwolf, it is important to know what it likes to eat. Direwolves are carnivores, which of course makes the choice of food easier.

How to breed the Direwolf in ARK

A direwolf’s mating interval is between 18 and 48 hours. After successful mating, if you play on default settings, the female Direwolf is pregnant for about 4 hours. After these 4 hours, you can welcome the little Direwolf pup into the world. As a puppy, it takes up another 5 hours of your attention, during which you have to keep putting food in its inventory. Pay attention to the embossing intervals every 8 hours to tickle the greatest potential out of the baby.

Once it gains juvenile status, it can feed on its own. The entire ripening time takes about 2 days and 1 hour.