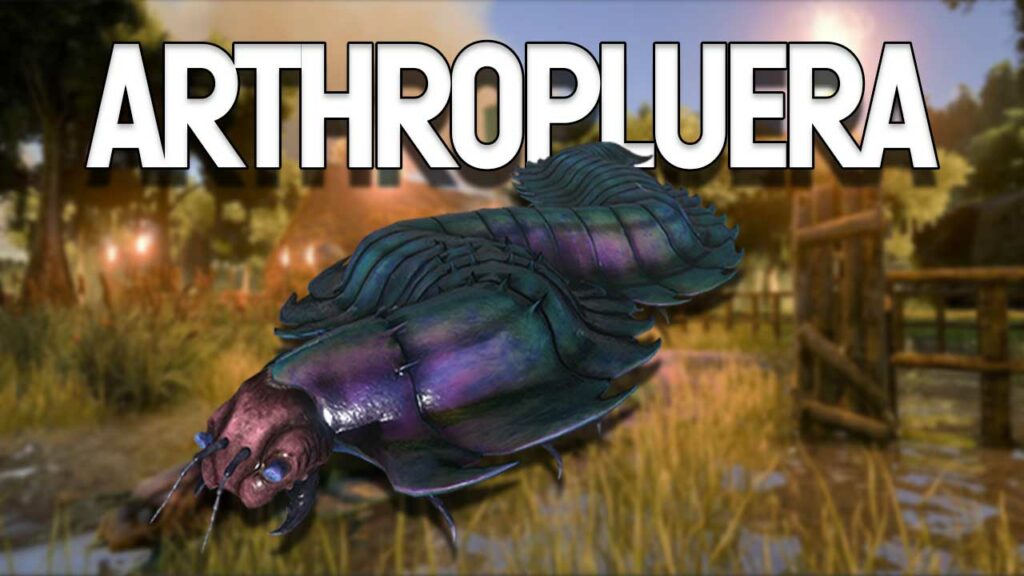 ARK: Survival Evolved: Arthropluera – How to Tame, Feed and Breed!

Find out everything you need to know about the Arthropluera in our ARK: Survival Evolved guide. But also how to catch it, tame it, feed it, and breed offspring too.

The Arthropluera can be found in the desert biomes and in caves throughout the ARK universe.

This is the Arthropluera in ARK: Survival Evolved

Appearance: The Arthropluera is a giant centipede species with some sort of armor on its back.

Wild: Due to its aggressive nature, the Arthropluera will attack you, the moment you’re in its sight. You should pay special attention to her acid attacks, where she shoots acid at you, which directly destroys your armor. Also, once she’s hunting you, she’ll chase you until you’re far enough away.

Domesticated: The Arthropluera is particularly useful for exploring caves or destroying the armor of other players or structures. Its attacks are pretty nasty, which is why she’s also ideal as a fighting companion in PVP. How to tame the Arthropluera in ARK

The Arthropluera is passively tamed by feeding Broth of Enlightenment (see below for recipe) or spoiled meat, although Enlightened Broth will tame it significantly faster than Rotten Meat. For the passive taming method, place the food you chose in your inventory slot on the far right. In order to be able to feed the Arthropluera safely, you have the option of taming them on land or in the water.

If you found an Arthropluera and want to tame it on land, you have to put on the Gillie suit first and wear Bug Repellant.

Once you’ve done this, approach it from behind until you’re almost next to its head until the request “Feed to tame” appears, which you execute with the corresponding key. Then, the Arthropluera will start attacking and hunting you, by using an acid attack that can destroy your whole armor. Escape to a safe place and wait for the Arthropluera to lose interest in you. Repeat this procedure again until your taming succeeds.

Taming the Arthropluera in the water has the following advantage: It won’t become aggressive but floats down on the spot.

Underwater, you swim up to it and execute the “Feed to Tame” command when it lights up. You may have to repeat this procedure a few times until the Arthropluera is tamed. Once you have successfully tamed it, you can swim back to the surface of your flying creature. The Arthropluera will follow you automatically to the surface, where you can grab it to carry it back to the land.

How to craft the Arthropluera Saddle

To craft the Arthropluera Saddle, you need to be level 54 and 30 Engram Points to unlock the recipe. You now need the following resources to craft:

How to feed the Arthropluera in ARK

Once you have tamed an Arthropluera, it is important to know what it likes to eat. Arthroplueras are carrion feeders, which means they eat raw meat or raw fish meat and spoiled meat. However, it also eats Broth of Enlightenment.

On Ragnarok, you can find the Deathworms which you have to kill for these horns in the desert, or you can get them from Iceworm males in the Frozen Dungeon which you also have to kill.

How to breed the Arthropluera in ARK

The breeding interval for an Arthropluera is 18 to 48 hours. How to Hatch Eggs: When you get a fertilized Arthropluera Egg from a successful mating, hatching begins. For this, the ambient temperature of the egg should be between 18 °C and 22 °C and within the Egg-Incubator at 20 °C. According to standard settings, the little Arthropluera baby hatches after about 2.5 hours. After that, it takes about 5 hours of your attention, during which you keep putting food in its inventory.

Once it gains juvenile status, it can feed from troughs on its own. The entire ripening time takes about 2 days and 3.5 hours.