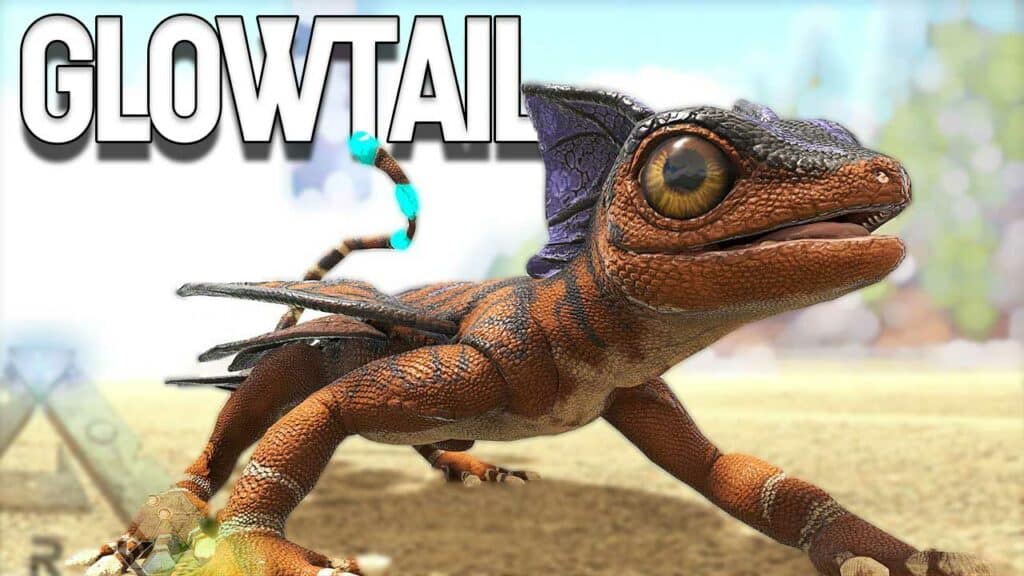 ARK: Survival Evolved: Glowtail – How to Tame, Feed and Breed!

Find out everything you need to know about the Glowtail in our ARK: Survival Evolved guide. But also how to catch it, tame it, feed it, and breed offspring too.

Although the Glowtail came with the Aberration DLC for ARK: Survival Evolved, you can find it on these maps: Aberration, Valguero, Crystal Isles, Lost Island, Genesis: Part 2, and Fjordur

This is the Glowtail in ARK: Survival Evolved

Appearance: The Glowtail is a small lizard with a glowing tail tip and two glowing stripes underneath. He also has wings that allow him to glide through the air.

Wild: Glowtails are friendly creatures that are walking across the ground or hanging from rocks and walls on the above-written maps.

Domesticated: Once you tamed a Glowtail, you can carry it around, sitting on your shoulder. As a shoulder creature, the Glowtail is more than just a living flashlight, it is also able to detect and indicate enemy players or creatures (very useful in PVP). In addition to that, the Glowtail has the ability to show you the dinosaurs or creatures at a particularly high level. It also offers protection against the Nameless but attracts Seeker and Reaper. All Glowtail Locations in ARK

The Glowtail is discoverable in these spots:

The Glowtail is passively tamed by feeding the taming food we listed below.

For feeding the Glowtail you have to place one of the listed food options in your inventory slot on the far right and approach the little lizard. When you are close enough, an order “Feed ____ to tame” will appear, which you execute.

You may have to repeat the process a few times until the Glowtail is tamed.

Food for Glowtails in ARK

Once you tamed your Glowtail, it is important to know what kind of food it likes to eat. Glowtails are carnivores, which makes the choice of food easier.

These are the best options of fodder to tame your Glowtail:

After taming, you can serve the normal meat menu to the Glowtail, just like any other carnivore:

How to breed Glowtails in ARK

The breeding interval of a Glowtail is 18 to 48 hours. How to Hatch Eggs: When you get a fertilized Glowtail Egg from a successful mating, the hatching begins. For this, the ambient temperature of the egg should be between 30 °C and 34 °C and within the Egg-Incubator at 32 °C. According to standard settings, the little Glowtail baby hatches after about 2.5 hours. After that, it needs about 5 hours of your attention, during which you have to keep putting food in its inventory.

Once it gains juvenile status, it can feed itself from troughs. The total maturation time takes about 2 days and 1 hour.