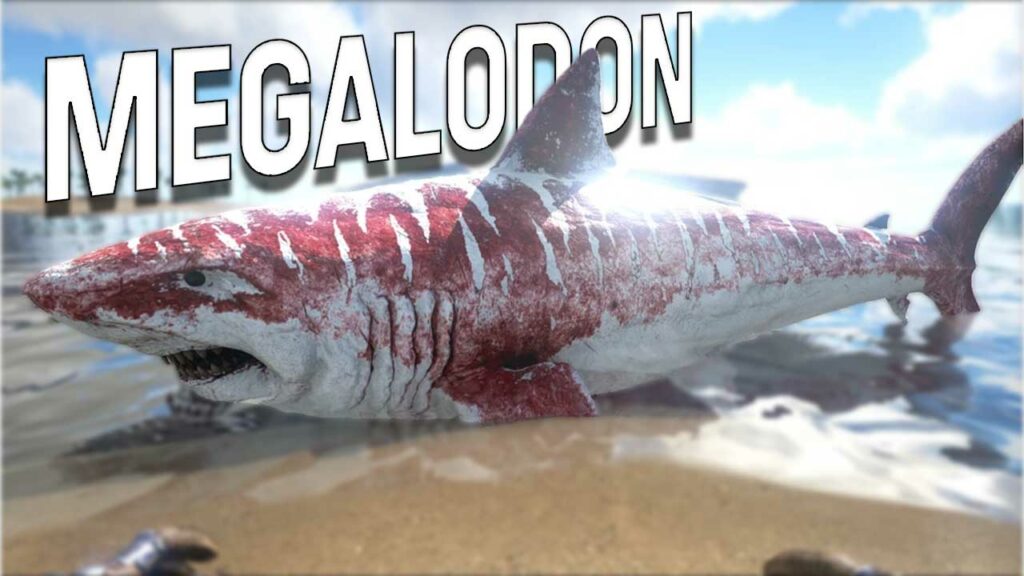 ARK: Survival Evolved: Megalodon – How to Tame, Feed and Breed!

The Megalodon has already been the subject of a few movies, and ARK: Survival Evolved is no exception. This mighty prehistoric shark is a merciless killer of the seas and oceans. As a tamed mount, however, it offers a good defense against its peers and other predators in the water.

In our guide about the Megalodon, you’ll learn everything you need to know about the primeval shark. But also how to catch it, tame it, feed it and breed offspring.

This is the Megalodon in ARK: Survival Evolved

Wild: Being permanently hungry, the Megalodon will attack anything that appears in its way. It is not uncommon to be attacked directly by this species while diving, even if they seemed to be far away. Chances are high that several Megalodons attack you at once. Basically, the Megalodon lives in deeper waters, but if it pursues you as prey, it will chase you as long as it can, even into shallow waters.

Domesticated: Once you have managed to tame a Megalodon, you can explore the seas and oceans in ARK. Even though it is not the fastest sea creature, its speed is still faster than most creatures, including you. Besides, as a mount, it also offers a good defense, if you get attacked. How to tame the Megalodon in ARK

How to hunt the Megalodon: The simplest way to hunt a Megalodon is to build a pen with a gate in shallow water. For the pen, build an easy U-shape, and leave the side of the beach open. (see video). Open the gate, and you swim into the field of vision of a wild Megalodon. If necessary, draw its attention to you by shooting it or something else. It will identify you as prey and start hunting you. Now you’ll swim through the gate into the shallow water pen you built.

The Megalodon is faster than you, so you should have tamed a mount for underwater on which you can flee from the Megalodon, or which has at least enough health to survive some attacks.

Once the Megalodon is inside the pen, close the gate. If several Megalodons followed you inside the pen, you have to eliminate the ones you don’t want to tame. Otherwise, they will try to eat your unconscious Megalodon.

Once the Megalodon is the only one in the pen, you can shoot it from the land, or even in the water until it is unconscious.

If you like, you can build a platform inside the pen, from which you can shoot better. This will prevent you from getting damaged by the biting attacks of the Megalodon.

How to tame it: Once it is unconscious, it is best to put the Superior Kibble, or Meat (Including Fish Meat) in its inventory and feed it to tame it. If the Megalodon still threatens to wake up, you can also feed it Narcoberries or Narcotic to keep its stun level up.

How to make the Megalodon Saddle

To craft the Megalodon Saddle, you need level 47 and 18 engram points to unlock the recipe. Now you need the following resources to craft it:

How to Feed the Megalodon in ARK

Once you have tamed your Megalodon, it is important to know what it eats. The Megalodon is a carnivore, which makes the choice of food easier.

How to breed the Megalodon in ARK

This is how you prepare the breeding: If you have a male and female specimen, build a pen that is big enough for both of them. Place both creatures inside the pen and set them to “Wander” through the command menu. Alternatively, you can set them directly to “Mating”, but then a player has to be nearby the pen, otherwise the mating will be stopped due to the rendering.

The breeding interval of a Megalodon is 18 to 48 hours. After successful mating, the female Megalodon will be pregnant for about 6 hours, if you play according to the standard settings. After 6 hours, you can welcome the little Megalodon baby into the world. As a baby, it needs another 7 hours of attention, during which you have to keep putting food in its inventory. Pay attention to the imprinting intervals every 8 hours to get the greatest potential out of the baby.

Once it reaches adolescent status, it can feed itself through the tough. The total maturation period takes about 2 days and 23.5 hours.