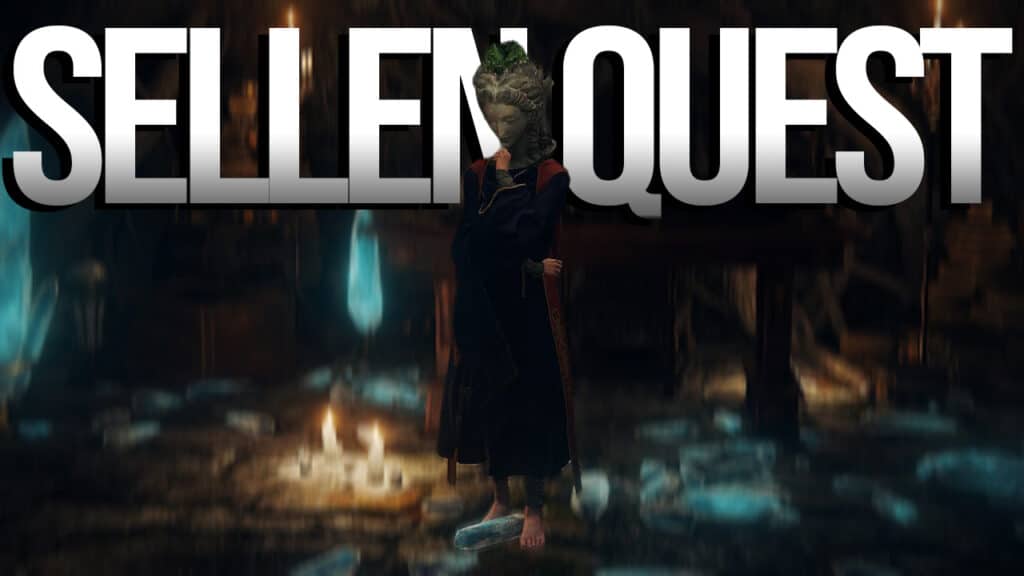 Elden Ring: Everything about the Quest of Sorceress Sellen

Elden Ring is a typical From Software game where every side quest is well hidden. In addition, you can often make a quest fail for the entire run with just one small wrong decision. So that this doesn’t happen to you with the Sorceress Sellen quest, we have the following guide for you.

This is Sorceress Sellen: One of the first NPCs you encounter in Elden Ring, the Sorceress Sellen is not only a character with a lengthy side quest centered around it but also a trader. She is in Limgrave in the Waypoint Ruins and sells you all sorts of spells for your mage career. She was banished from Raya Lucaria’s Academy as a cursed renegade witch while attempting to restore the primeval flow of Glintstone Sorcery.

All Information about the Sorceress Sellen Quest in Elden Ring

The Sorceress Sellen Questline is one of the longest side quests in the game. It also stayed with you late into the game, as you must have access to Altus Plateau, Mt. Gelmir, and Caelid. You can reach all of these areas earlier, but it’s not worth it since strong opponents are waiting for you along the way. For the ascent to the Altus Plateau provided by the game, you should also have the two parts of the Dectus Medallion to use the elevator. In the following, we will describe all the individual quest steps in detail.

Overview of Sorceress Sellen’s Side Quest in Elden Ring

All Steps of Sorceress Sellen Quest

Since you have to travel to many different locations for this quest, we’ll break the quest down into separate sections. This gives you a better overview of the different steps and their order. Luckily you can’t do too much wrong in the quest around Sorceress Sellen. Also, you don’t necessarily have to start them at a specific point in your run, as all the relevant characters will still be waiting for you in their respective places after the events later in the story.

For this, you must go to the Waypoint Ruins in Limgrave. A small ruin east of the lake where you can meet the Dragon Agheel. There is a grace that you should unlock for later visits. On top of that, a cellar in the ruins needs to be found. A small boss fight awaits you when you get to the bottom of the stairs. Here you have to face one of the Mad Pumpkin Heads. The fight shouldn’t be hard for you, but make sure to attack the boss from behind if possible so that his helmet doesn’t absorb all your damage.

Once the boss is defeated, the door at the other end of the room will open. Here is the hiding place of Sorceress Sellen. After a short dialog, you now have the option to purchase some new Glintstone Sorceries. You can also give her various scrolls as the game progresses to unlock more spells. However, Sorceress Sellen’s quest doesn’t start until much later in your Elden Ring run. That’s why you’re done here for now.

Step 2: This is how Sorceress Sellen Quest starts in Elden Ring

To start the quest, you must meet another magician. The Primeval Wizard Azur resides on Mt. Gelmir. You can find him north of the Hermit Village on Mt. Gelmir. But to get there, you must uncover the dark side of House Vulcan. For this, it is necessary to do the quest around Rya. When you’ve done that, you must move around the volcano to the left.

Before you meet the Primeval Wizard Azur, you have to overcome one more hurdle. The Demi-Human Queen Maggie confronts you with her horde of demi-humans. While you have the option here of simply running past her and activating a Site of Grace behind her, the fight isn’t that challenging, and it’s worth ending her life for a few souls and another sorcery slot.

Then you talk to the Primeval Wizard Azur, who will give you the magic “Comet Azur”, one of the most potent magic in the game. Afterward, return to the Waypoint Ruins and Sorceress Sellen. After a short talk, you can start the ques, and she will give you the Sellian Sealbreaker.

This is where the first task that Sorceress Sellen sets for you begin; you shall search for Master Lusat for her. He is located in Caelid near the Town of Sorcery, Sellia. The first thing to do here is to unravel a secret to dissolving the magical barriers on the way to the Church of the Plague. North of the church, there is a cemetery, you have to pass it. You will find a tombstone shaped like a castle on the eastern cliff face. Behind the enemy is a hidden entrance to the secret dungeon “Sellia Hideaway”.

There are some hidden paths in this dungeon that you can open with a simple hit or roll. So on the way down, you have to fight through a few enemies and uncover a few walls. When you get to an immense rift, you need to use the giant crystals to find your way down. To the north, you’ll find the seal you have to break with Sorceress Sellen’s Sellian Sealbreaker. Behind you will meet Master Lusat, who will give you the legendary spell “Stars of Ruin”.

After you return to  Sorceress Sellen in the Waypoint Ruins with the newly acquired spell, you can pass on with her quest in Elden Ring. You shall seek her body on the Weeping Peninsula. On the island’s northwest is the Fourth Church of Marika, and to the west is the entrance to the Witchbane Ruins. There is another staircase leading underground. Once at the bottom, you must open the door to Sorceress Sellen’s Dungeon.

After talking to her, she will give you the key item, “Sellen’s Primal Glintstone”. But you won’t need this until later. Before that, you have to search for someone who appears to be out to kill Sellen. That someone is Witch-Hunter Jerren, whom you must find and meet in Castle Redmane.

Step 5: The Witch-Hunter and the Three Sisters

To meet up with the Witch-Hunter at Castle Redmane, you must complete one of the best boss fights in Elden Ring. When you arrive at the castle, there is a small ceremony to open the tournament, after which the boss fight against the Star Scourge Radahn begins. Once you’ve defeated him, you can talk to Witch-Hunter Jerren again in the throne room. With the information gained, go back to the Witchbane Ruins to Sellen. You can now talk about Jerren, the Witch-Hunter, with her.

Next, you must travel to Caria Manor in Liurnia. If you have already met Ranni in her tower behind the Caria Manor, you can alternatively travel to it. Midway between Rannis and Rennas tower, there is a ruin. In the lower area, an illusory floor needs to be revealed by rolling. Once inside the hidden library is an illusory wall in the southwest area. In the library’s secret room is an inanimate body that you need to insert Sellen’s Primal Glintstone. With this act, you transfer Sellen’s soul into her new body.

Step 6: The End of the Quest around Sorceress Sellen in Elden Ring

For the last step, you must have defeated the Fragment Bearer Rennala in the Academy of Raya Lucaria. Because in front of the entrance door to her Boss-Arena, there are now two different summon signs. Here you have to make a momentous decision. Either you complete the quest in Sellen’s service and help her defeat the Witch-Hunter Jerren. Or you decide to betray her and help the Witch-Hunter in his hunt.

ATTENTION: If you decide to help the Witch-Hunter Jerren, the two armor sets of Azur and Lusat mentioned in Step 7 remain inaccessible to you up to NG+.

Perhaps you have also noticed the impressive armor sets of the two mages Azur and Lusat and are wondering how you can get them. It doesn’t matter whether you’re a magician or a collector, you want to own the two sets, don’t you?
So if you’ve decided on the proper ending, you can grab the two sets.

After completing Sorceress Sellen’s quest in Elden Ring, you can visit the two mages again at their whereabouts in Mt. Gelmir or Sellia. However, you only find their lifeless bodies, from which you can now take the two armor sets. These are not only particularly striking visually, but their bonuses are also very useful for magicians with Comet or Star Sorceries.

Are you still missing the Sorceress Sellen Quest in Elden Ring, or have you already completed all the side quests? Let us know in the comments!