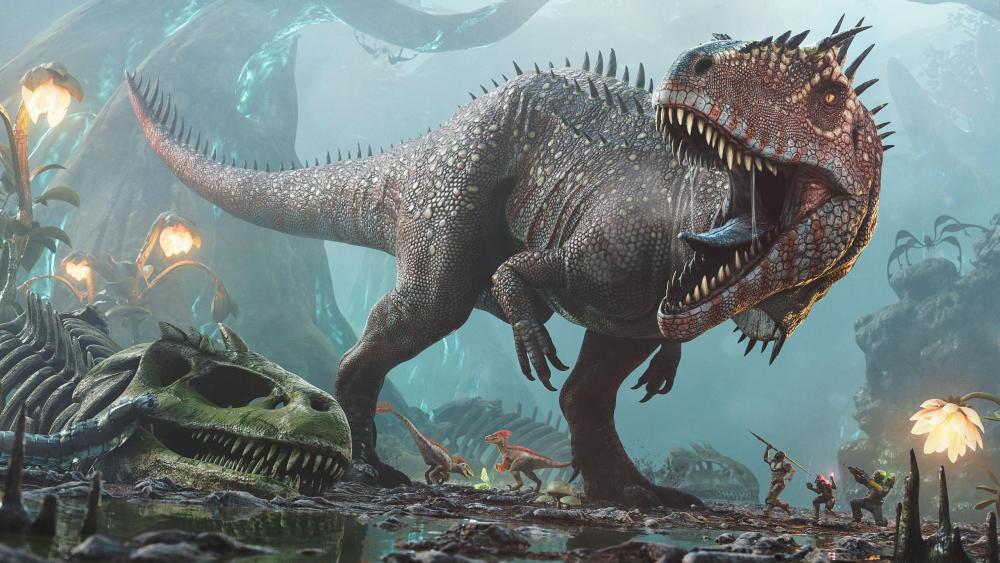 New Dino in ARK: Survival Evolved: This is the Carcharodontosaurus

On Friday, September 2nd, 2022, Studio Wildcard announced a new dinosaur that will appear in ARK: Survival Evolved at the end of this year: the Carcharodontosaurus.

We’ll help you through the new information and tell you what you can expect. According to the developers, the Carcharodontosaurus will be a major competitor for the previously strongest and most feared predators, like the Giga in ARK: Survival Evolved.

The Dossiers of the Carcharodontosaurus in ARK

What the Dossier tells about the new ARK addition:

“I feel lucky to have crossed paths with Carcharodontosaurus medicupestis and lived to tell the tale. Though I’m not sure if this predator grows bigger than a Giganotosaurus, I hope never to find out. Just one of these bruisers held its own against an army of us, and that encounter cost us dearly.

Carcharodontosaurus can sweep aside attackers with its tail, but it’s the other end you’ll really want to avoid. It has teeth like steak knives, set in jaws strong enough to shred most prey. Even a near-miss will carve you up, but good.

Like its namesake, the great white shark, Carcharodontosaurus gets more dangerous once it tastes blood. Each kill seems to give these monsters a rush and drive it into a berserker frenzy.”

“Anyone that manages to tame a Carcharodontosaurus will gain a new way to rally their tribe for battle. There’s something about this monster’s roar that drives others to fight — a war cry for Hell’s own army.

The more tactical tribes will let their Carcharodontosaurus tear through the mid-sized creatures in their enemy’s ranks, thereby building up its blood rage to take on the largest threats. Talk about shock and awe!” What the Dossier tells us about the Carcharodontosaurus

The appearance of the Carcharodontosaurus is the typical carnivore look, with an unmistakable resemblance to its relatives like the Giga, T-Rex, and Allosaurus.

It has strong and large legs, which will probably allow him to have a high movement speed-just for the size. The body of the Carcharodontosaurus seems quite massive, with a thick, muscular tail. The arms are longer than the T-Rex or Carnotaurus, but not particularly large either.

Spikes run down its back from head to tail. The massive spikes on the back of its head are the first ones you notice because of their size, however, don’t underestimate the spikes on its tail. Similar to the Carno, the Carcharodontosaurus has two horns, growing to the side, which are significantly smaller compared to those of its relative.

Additionally, in the lower right corner of the dossier, you can see a belt, that represents the rideability after taming. Underneath the belt, you can see a tick and a cross. The only other creature in ARK, who got the same symbols, is the Giga, with the meaning, that can ride it until it goes into a frenzy. Accordingly, it’s possible that the Carcharodontosaurus will also lose its rideability at some point. It remains to be seen whether it will also attack its allies in rage mode, like the Giga.

Bloodlust: According to the dossier, the Carcharodontosaurus falls into a berserker frenzy after eating and tasting opponents’ or attackers’ blood, which will increase its attack power, making it even more dangerous. This ability helps it become an ideal partner in boss or PVP fights, as long as he doesn’t see his allies as food or opponents.

Roar: The description of how the Carcharodontosaurus uses its roar to lead its allies into a battle is similar to the ability of the Yutyrannus, which also uses its roar to boost the team’s attack power and motivation. It remains to be seen whether the effects of the Carcharodontosaurus- roar are different from the Yutyrannus-roar, or whether it offers other advantages.

Attacks: Aside from the normal biting attacks, the dossier mentions that the Carcharodontosaurus can also use its tail to attack, by using it to launch its attackers or opponents through the air, like the tail attacks of a Bronto.

How to tame the new Dinosaur

At this point, there is no reveal about the taming method you need to use. Presumably, it’ll be the knockout method, that is used with most carnivores of that type: You have to keep shooting at the target until it faints.  Then use its favorite food to tame the unconscious dinosaur.

Where to find the Carcharodontosaurus in ARK?

We can only speculate about the maps, where the Carcharodontosaurus will be found in ARK: Survival Evolved. But if you go by the picture that was published with the announcement, you can assume that it will at least be found in Genesis: Part 1