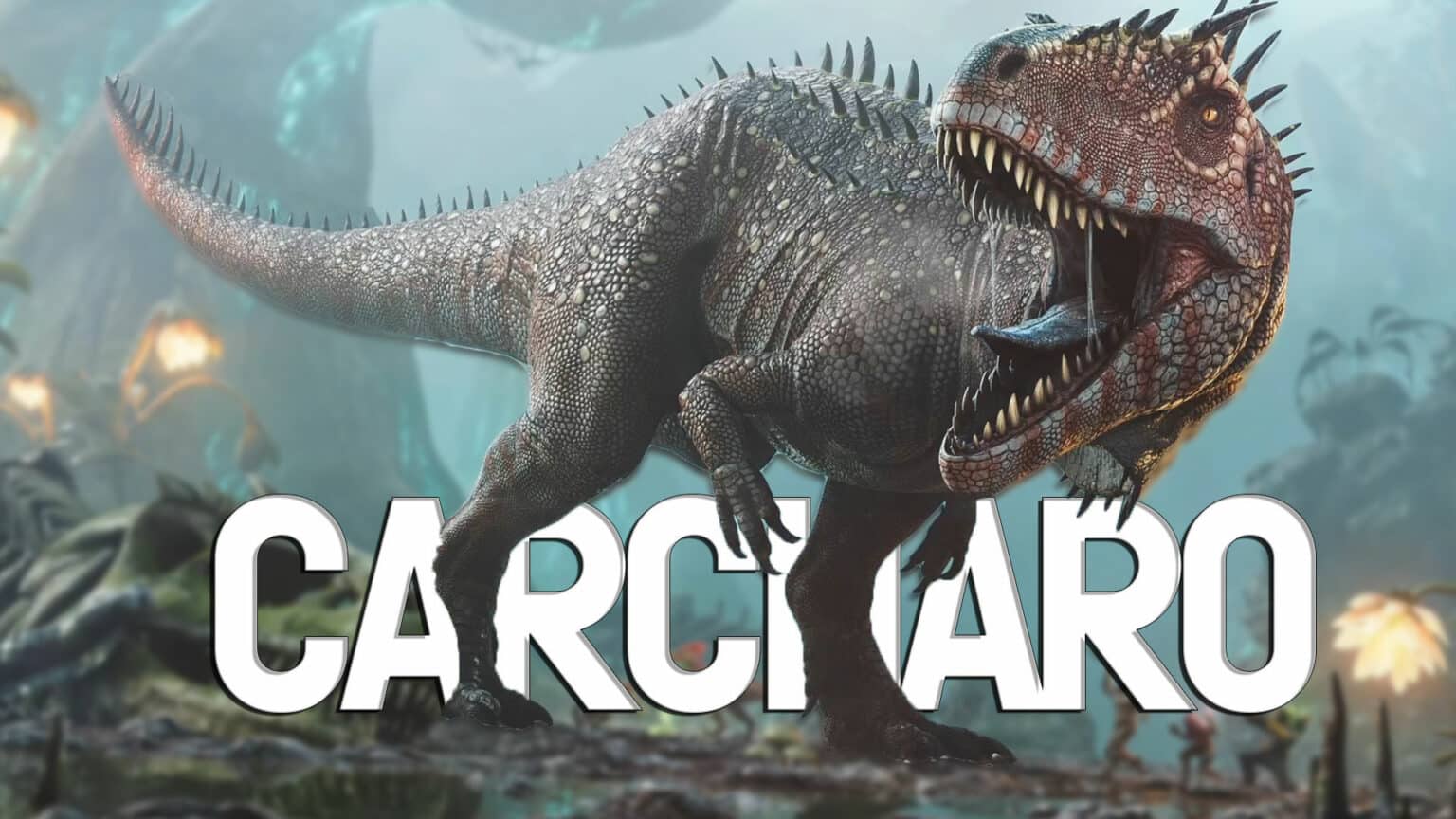 ARK: Survival Evolved: Carcharodontosaurus – How to Tame, Feed and Breed!

In our guide to the Carcharodontosaurus, you’ll learn everything you need to know about the new giant carnivore in ARK: Survival Evolved. But also how to tame it, feed it, and also breed offspring.

The Carcharodontosaurus is finally available in ARK, probably the last dino in the survival MMO. Wildcard announced it back in September 2022, and now it has entered the game with a patch on November 06.

This is the Carcharodontosaurus in ARK: Survival Evolved

Appearance: The appearance of the Carcharodontosaurus, is that of a typical carnivore, with a clear resemblance, to the Giga, T-Rex, and Allosaurus.

It has powerful and large legs, with which it can reach a fast movement only by size. Its body seems quite massive, with a thick, muscular tail. The arms are longer than the T-Rex or Carnotaurus, but not particularly large either.

Spines run across its back from head to tail end. The spines on the back of its head are the first to catch your eye because of their size, but the spines on its tail are also quite large. Similar to the Carno, the Carcharodontosaurus also has two horns that have grown to the side, but these are much smaller than its relative.

In the bloodlust, blood drips from its mouth, and after each snacked dinosaur, its eyes turn yellow.

Wild: The Carcharodontosaurus is an aggressive carnivore, just like its relatives we mentioned above, which also attacks everything in its environment to turn it into food. However, it is important to know that it is faster and more agile than the Giga, the reigning boss carnivore.

Tamed: Once you’ve managed to tame it, you’ll have an especially good dino for battle, as each dino you kill with it boosts its blood and kill buff, which makes it more than four times stronger in its attacks. This buff can be stacked up to 100 by defeated dinosaurs. After that, you can’t increase your Carcharo’s attack strength any further – so 100 dinos is the upper limit for the Blood Rush. All Carcharodontosaurus Locations in ARK:

You will find the Carcharodontosaurus at all the Gigaspawnpoints. We have listed all spawn locations of normal Gigas here:

How to tame the Carcharodontosaurus in ARK

Along with the Carcharo came a new and unique taming method to ARK, because you need to befriend it to start the taming process.

Info: Whether you set a trap for the Carcharo or not is up to you and is not so crucial, because you have to dismantle it anyway and build it again if necessary.

To make friends with the Carcharo, you have to bring the lifeless bodies of other dinosaurs to it, by dragging them to it (just like with the fish you bring to an otter for taming). Once you are near it with a carcass, the Carcharo will start sniffing, and you can drop the carcass for it to eat.

Note: The Carcharodontosaurus will attack you after it gets its snack from you; if the friendship indicator isn’t green, you’d better get out of there quickly, if possible, with a fast mount or a jetpack.

Once you’ve made friends with the Carcharo, a timer of 10 minutes will start automatically, which tells you how much time you have for the taming. To tame it, you have to eat other dinosaurs together with your new friend. Each Dino you finish off will increase the percentage of the taming process.

If the 10 minutes aren’t enough, which they probably won’t be, your taming progress will freeze, even if you have to befriend it to start the process again.

CAUTION! After the timer runs out, but the Carcharodontosaurus is not yet tamed, you will be dropped, and he will try to snack on you again until you rebuild your friendship with the help of carcasses.

Tip: Try killing as many small creatures as possible to avoid being attacked. Each damage taken does not reduce the taming process, but it does reduce the effectiveness.

How to craft the Carcharodontosaurus Saddle

To craft the Carcharo Saddle, you must reach level 96 and spend 75 engram points to unlock the recipe. Now you need the following resources to craft it:

How to Feed a Carcharodontosaurus in ARK

Once you have tamed your Carcharo, it is important to know what it likes to eat. Carcharos are carnivores, which, of course, makes the choice of food easier.

How to breed the Carcharodontosaurus in ARK

The good news is: It’s breedable; the bad news is: We haven’t found out how long the incubation period is, according to standard servers, and how long it needs to grow up. However, since it is very similar to the Giga and even appears at its spawn points, we have included the Giga’s information for you to use as a guide in any case. We will update the data as soon as more is known.

This is how you prepare the breeding: If you have a male and female specimen, you build an enclosure that is large enough. Put both dinos in the pen and set them to “wander” via the command menu. Alternatively, you can switch directly to “Pair”, but there must always be a player nearby; otherwise, the pairing will stop due to the rendering.

The breeding interval of a Carcharodontosaurus is 18 to 48 hours.

How to Hatch Eggs: The hatching begins when you find a fertilized Giga Egg from a successful mating. For hatching, the ambient temperature of the egg should be between 43 °C and 44 °C and within the Egg-Incubator at 44 °C. According to standard settings, the little Giga baby hatches after about 30 hours. After that, it needs about 28 hours of your attention, during which you must keep putting food in its inventory.

Once it gains juvenile status, it can feed itself from troughs. The total maturation time takes about 11 days and 13.5 hours.