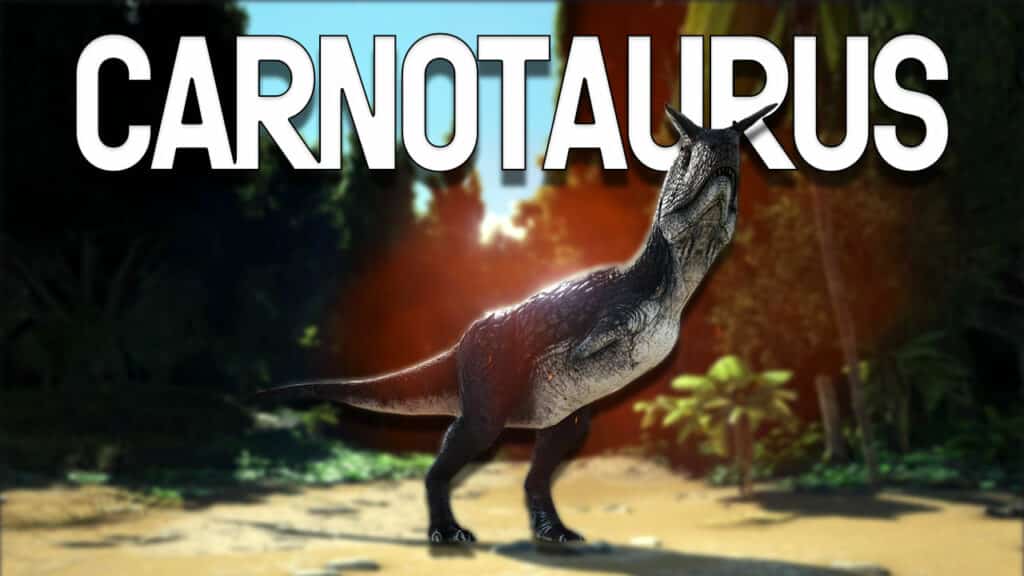 ARK: Survival Evolved: Carnotaurus – How to Tame, Feed and Breed!

The Carnotaurus, or Carno for short, in ARK: Survival Evolved, is a medium-sized carnivore that is highly aggressive and often found in packs. Due to his high speed, he is a serious opponent.

Find out everything you need to know about the carnivore in our guide to the Carnotaurus. But also how to catch him, tame him, feed him, and breed offspring too.

This is the Carnotaurus in ARK: Survival Evolved

Appearance: The Carnotaurus shows overall similarities with the T-Rex and the Allosaurus. Nevertheless, you can distinguish him from them by the following characteristics:

Wild: You can encounter the Carnotaurus as a loner, but also as a member of a three-headed pack where two Carnos have joined a Yutyrannus. It lives almost everywhere in the Ark, but proliferates near the snow biome.

The Carnotaurus is an aggressive carnivore that will attack anything in sight. He usually prefers other creatures to humans. Since he’s almost as fast as a Raptor, that’s probably better too. Carnos are even intelligent enough to duck before larger predators rather than engage in pointless combat.

Beware of the horns on their heads, even if they are rarely used. Because of their point, they can cause you serious injuries and bleeding.

Domesticated: The Carnotaurus makes a good mount as it is almost as fast as its smaller relatives, the raptors. After a sprint, however, he has the disadvantage that he has to recover for quite a long time. Nevertheless, he is a perfect companion due to his speed and agility, which also offers a very good attack in battle. How to tame the Carnotaurus in ARK

How to hunt the Carnotaurus: Depending on where you encounter the Carnotaurus, you must have the right strategy in mind to bag this carnivore. Especially since the Carno has another Carno and a Yutyrannus as companions in the winter biome.

In a pack: If you encounter a Carnotaurus in a pack in the winter biome, you should eliminate the other two dinosaurs in the pack and only then try to tame the Carno. But you can also lure all three into bear traps and tame all three. To lure the Yutyrannus and the two Carnos into bear traps, however, requires some skill or a mass of bear traps. Once they’re pinned down, smack them with the tranquilizer darts.

Alone and simple: Of course, if you meet a Carnotaurus alone, it makes the whole thing easier. In this particular situation, you can easily set up bear traps, lure him in, and once he’s stuck, bombard him with tranquilizer darts until his lights go out.

Alone and daring: If you have leveled up enough stamina and speed, you can of course run away from him and keep shooting tranquilizer darts at him until he is knocked out. Due to its speed, this isn’t the smartest way to tame it, but since the Carno is easily distracted by other creatures it prefers to humans, this can work.

Alone and safe: The safest, but also the most complex, is to build a trap for him like the T-Rex out of three Dino stone or metal archways. Set up the gates in a square shape and place a bear trap or two in the middle. Make sure you always leave a little space between the goals. Now use the gates and close all the gates except for the two you escape through.

Now you lure in the Carnotaurus. You provoke him into following you. The important thing here is that you have a faster mount or a very high movement speed so that you can also escape. If he follows you, run through the open gates of your construction – but don’t step into the bear trap yourself.

Once the Carnotaurus is stuck in the bear trap, close the two open gates and shoot him with tranquilizer darts until he’s knocked out. You can easily do this through the gaps you left between the gates. Depending on the Allosaurus’ level, this may take some time and resources.

How to tame him: Once he’s unconscious, put meat or kibble (recipes below) in his inventory and feed him that. The better the meat, the faster the taming. To keep the Carnotaurus down and the Stun up, use the Narcotic or Narcoberries.

How to make the Carnotaurus saddle

To craft the Carno Saddle, you need to be level 46 and 21 Engram Points to unlock the recipe. You now need the following resources to craft:

How to Feed a Carnotaurus in ARK

Once you have tamed your Carnotaurus, it is important to know what it likes to eat. Carnos are carnivores, which of course makes the choice of food easier.

How to breed the Carnotaurus in ARK

The breeding interval of a Carnotaurus is 18 to 48 hours. How to hatch eggs: If you get a fertilized Carnotaurus egg from a successful mating, hatching begins. For this, the ambient temperature of the egg should be between 26 °C and 32 °C. According to standard settings, the little Carno Baby hatches after about 2 hours. After that, it takes about 4.5 hours of your attention, during which you keep putting meat in its inventory.