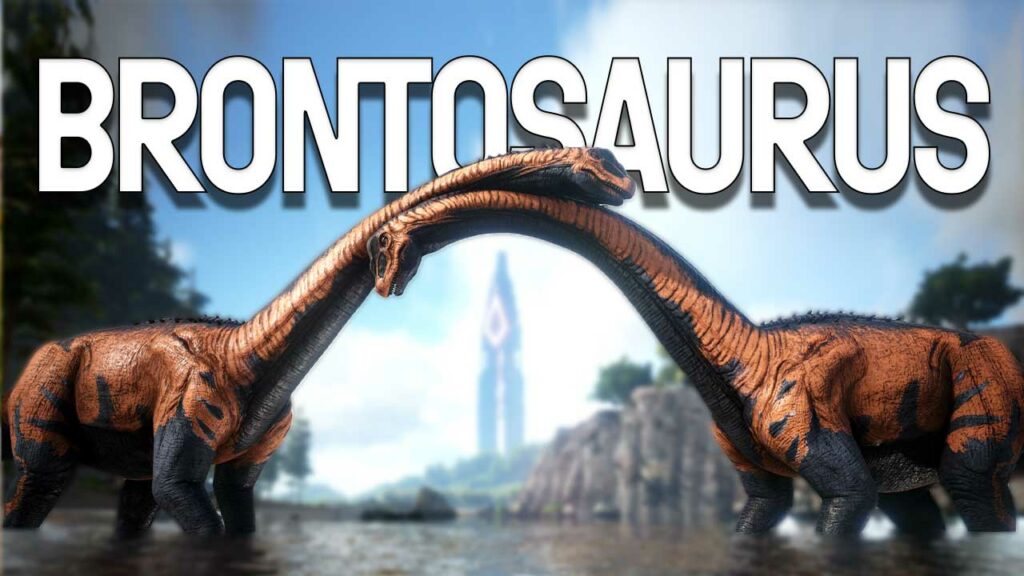 ARK: Survival Evolved: Brontosaurus – How to Tame, Feed and Breed!

The Brontosaurus in ARK: Survival Evolved is a giant sauropod that can be super useful as a beast of burden. He can also carry a platform saddle that allows you to build mobile bases and defense points or bases on him.

Find out everything you need to know about the giant herbivore in our Brontosaurus guide. But also how to catch him, tame him, feed him, and breed offspring too.

This is the Brontosaurus in ARK: Survival Evolved

Appearance: The Brontosaurus, like the Titanosaurus, is one of the largest sauropods. However, it is much smaller than its giant relative. However, brontosaurs have a huge and massive body, a very long neck, and a long whip-like tail. Its body is covered in smooth scales, and small spikes run down its back. Brontosaurs are often found in dark tones, but on rare occasions, you may be lucky enough to encounter special specimens in light tones.

Wild: Due to its massive appearance, the Brontosaurus needn’t worry too much about being attacked. They are mostly loners, but you can also meet them in groups of 2 to 3 individuals. Normally, a brontosaurus is a peaceful and relaxed fellow, which changes abruptly if you attack it. If you make the mistake of attacking him, he will try to trample you flat or throw you away with his long tail. These attacks hurt and drain your health from your body.

Tamed: If you have tamed a brontosaurus, you have found an ideal beast of burden that can transport large quantities and a wide variety of resources. In addition, the Brontosaurus can carry a platform saddle, allowing you to build a base, defense point, or simple base on it. Thanks to his large amount of life points, he also withstands some attacks. How to tame the Brontosaurus in ARK

For variant one, you take a crossbow or a bow and just run away from him. In between, you turn around and shoot him. Just make sure you keep enough distance, so you don’t get caught or trampled by its tail. Also, you should know that the Brontosaurus is faster than its heavy stature suggests.

The second variant is just a little bit more involved, as it requires one or more large bear traps. You set this up and provoke the Bronto by shooting the first tranquilizer dart at him. Now he should run after you and step into the big bear trap. After he’s pinned down, shoot tranquilizer darts at him.

How to tame him: Once he’s unconscious, put kibble (recipes below) or vegetables in his inventory and feed him to tame him. To keep the stun value up while taming, use Narcoberries or the narcotic.

How to craft the Brontosaurus Saddle and Platform Saddle

To craft the Brontosaurus Saddle, you need to be level 63 and 21 Engram Points to unlock the recipe. You now need the following resources to craft:

You can also craft a platform saddle for the Brontosaurus. For this, you need level 82 and 35 engram points, as well as the following resources:

How to feed a Brontosaurus in ARK

Once you have tamed your Brontosaurus, it is important to know what it likes to eat. Brontosaurs are herbivores, which of course makes the choice of food easier.

How to breed the Brontosaurus in ARK

The breeding interval of a Brontosaurus is 18 to 48 hours. How to Hatch Eggs: When you get a fertilized Brontosaurus egg from a successful mating, hatching begins. For this, the ambient temperature of the egg should be between 28 °C and 31 °C. According to standard settings, the small brontosaurus baby hatches after about 5 hours. After that, it takes about another 9.5 hours of your attention, during which you keep putting berries, vegetables, etc. (see above) in its inventory. Pay attention to the embossing intervals every 8 hours to tickle the greatest potential out of the baby.