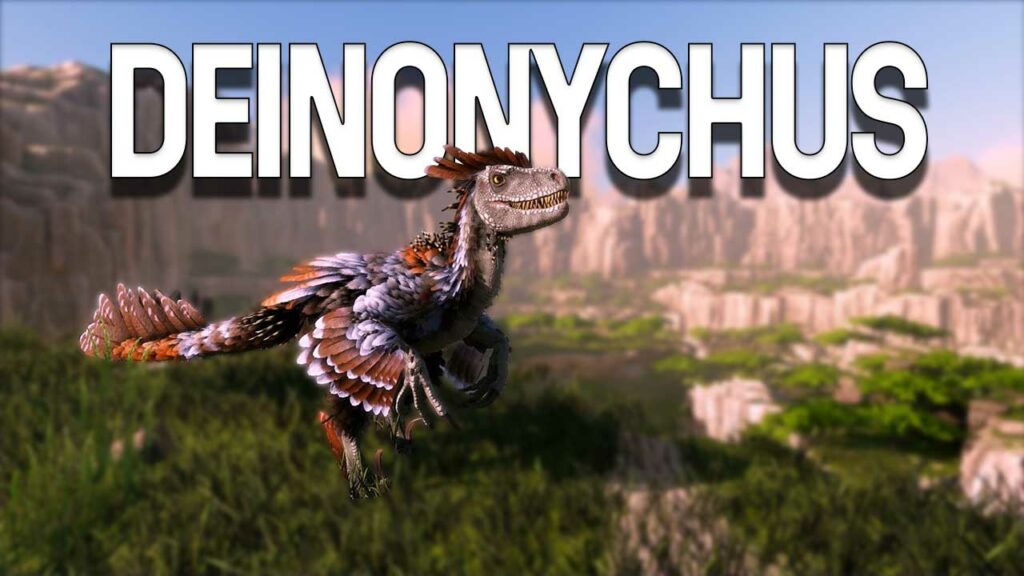 ARK: Survival Evolved: Deinonychus – How to Tame, Feed and Breed!

The Deinonychus is one of the special species in the game ARK: Survival Evolved, as you cannot tame it conventionally, passively, or through stunning. In order to get him as a companion, you must steal a fertilized egg of his kind, which you can only find on Valguero. Once you’ve done that, you’ve got a mount that deals damage, moves fast, and can even climb.

Find out everything you need to know about the carnivore in our guide to the Deinonychus. But also how to catch him, tame him, feed him, and breed offspring too.

This is the Deinonychus in ARK: Survival Evolved

Appearance: Outwardly, the Deinonychus resembles its relative, the raptor, in almost everything except that it wears plumage. Its claws are also much sharper than the raptor’s, as the Deinonychus is an adept climber and the claws must hold it by digging into the material it is climbing.

Wild: The Deinonychus is quick and so quiet that you usually notice it too late. In addition, it often lurks on ledges or climbs to a height from which it can see everything and easily pounce on its prey. Due to his highly aggressive nature, he basically attacks everything that comes into his field of vision, the size of the prey doesn’t matter to him at all.

Domesticated: Domesticated, they are fast and agile mounts that can also deal good damage in combat. However, breeding is not that easy as he is naturally protective of nests, even if they are not his own. But you can only tame him if you hatch the egg. How to tame the Deinonychus in ARK

The Deinonychus is not tamed passively or by stunning, instead, you must find one of its nests and steal a fertilized egg from there, which you then hatch at your base. To make it easier for you to get the nest and eventually the egg, you can try to lure the deinonychus away, build a trap for them, or just kill them on the spot. It’s important that you have some sort of plan in place beforehand, so you’re not surprised when several attacks you at once.

Since they can jump onto ground mounts, it’s better to use a flying mount if you want to use one at all.

If you have managed to steal an egg, hatch it and provide the newborn with enough food.

How to make the Deinonychus Saddle

To craft the Deinonychus Saddle, you need to be level 32 and 30 Engram Points to unlock the recipe. You now need the following resources to craft:

That eats a Deinonychus in ARK

Once you have hatched your Deinonychus, you must take care of it. Deinonychus are carnivores, which of course makes the choice of food easier.

How to breed the Deinonychus in ARK

The breeding interval of a Deinonychus is 18 to 48 hours.

How to Hatch Eggs: If you have obtained a fertilized Deinonychus egg from a successful mating, hatching begins. For this, the ambient temperature of the egg should be between 80 °C and 90 °C and in the egg incubator at 85 °C. According to standard settings, the small Deinonychus baby hatches after about 5 hours. After that, it takes about 4 hours of your attention, during which you keep putting food in its inventory.