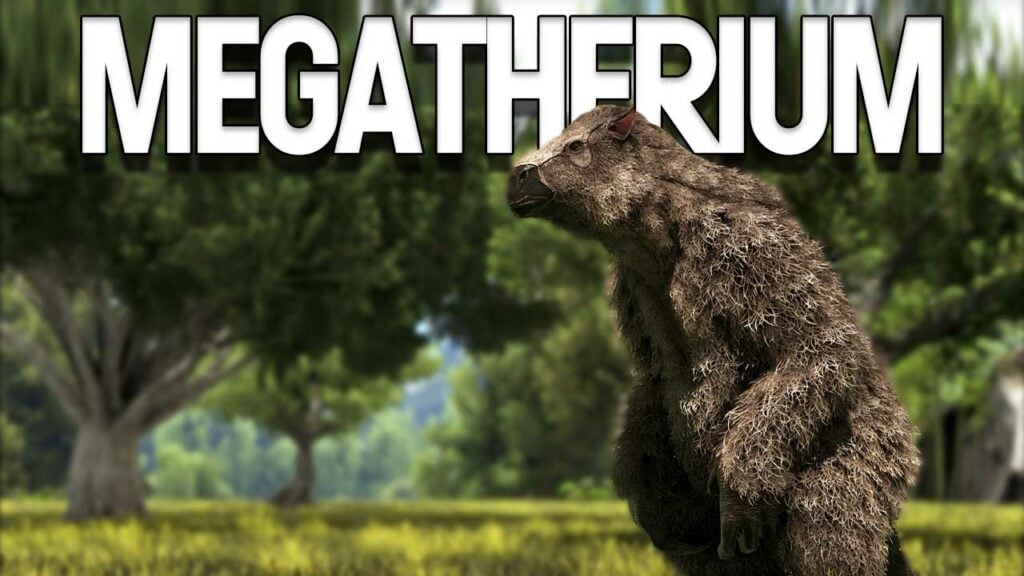 ARK: Survival Evolved: Megatherium – How to Tame, Feed and Breed!

Find out everything you need to know about the fluffy omnivore in our ARK: Survival Evolved Megatherium guide. But also how to catch him, tame him, feed him, and breed offspring too.

You can often find the Megatherium in the snow biomes, as well as the Redwood Forest, where it is always roaming around in search of food. Sometimes it also stands on its hind legs, which makes it appear even larger.

This is the Megatherium in ARK: Survival Evolved

Appearance: The giant ancestor of the sloth, the Megatherium is a large mammal. Its body is lined with fur to protect it from the elements. It can defend itself with the help of its claws, but it can also successfully search for and gather food.

Wild: In the Snow biome or Redwood Forest you can find the Megatherium, although it is an omnivore, mainly in search of the honey of the giant bees. Megatheriums are generally peaceful until you provoke or attack them. It will then sprint towards you and attack you, possibly playing badly with you.

Domesticated: The Megatherium is particularly suitable for farming berries and straw. It is also an excellent fighter, as it can inflict high damage with its claws. Spiders do less damage to him than to other creatures, which is why he is also suitable for fighting the broodmother, i.e. the first boss in the Ark.

How to tame the Megatherium in ARK

How to hunt a Megatherium: Since the Megatherium can do quite a bit of damage to you, it’s better to lure the giant sloth into a bear trap that will hold it in place, or trap it directly with a chain bola.

To lure it into a bear trap, place several of them and lure the Megatherium. It will then want to attack you and charge towards you. Stand behind a bear trap so that it has no choice but to run into it.

Once the Megatherium is locked, shoot it with the tranquilizer darts until it falls unconscious.

How to tame it: Once it’s unconscious, it’s best to put one of the kibbles in its inventory and feed it to it. To keep the Megatherium down and the stun value up, it’s best to use the Narcotic or narcoberries.

How to craft the Megatherium saddle

To craft the Megatherium Saddle, you need to be level 52 and 24 Engram Points to unlock the recipe. You now need the following resources to craft:

How to feed a Megatherium in ARK

Once you have tamed your Megatherium, it is important to know what it likes to eat. Megatheriums are omnivores, which of course makes the choice of food easier, which means you can offer it meat, berries, vegetables, etc. and it will eat it.

As a sweet tooth, however, the megatherium prefers the following treats:

How to grow the Megatherium in ARK

The mating interval of a Megatherium is between 18 and 48 hours. After successful mating, if you play on default settings, the female Megatherium will be pregnant for about 8 hours. After these 8 hours, you can welcome the little Megatherium Baby into the world. As a baby, it takes up another 9 hours of your attention, during which you have to keep putting food in its inventory. Pay attention to the embossing intervals every 8 hours to tickle the greatest potential out of the baby.