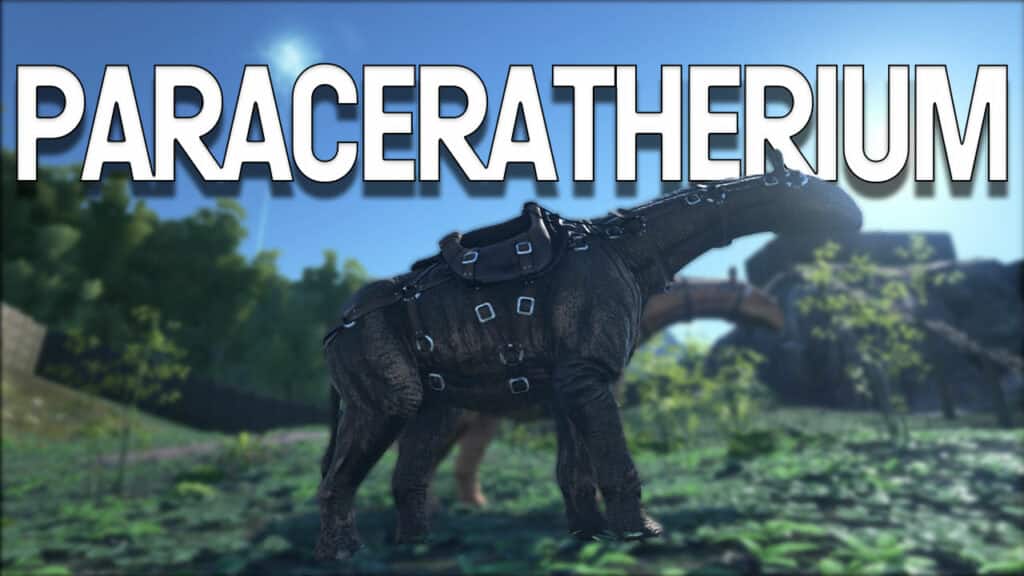 ARK: Survival Evolved: Paraceratherium – How to Tame, Feed and Breed!

The Paraceratherium in ARK: Survival Evolved is a peaceful, huge, and funny-looking creature that is encountered as a solitary or herd animal. Due to its size and power, it offers some advantages tamed as a transport animal, a combat animal, or with a platform saddle as a mobile base.

Find out everything you need to know about the giant herbivore in our Paraceratherium guide. But also how to catch him, tame him, feed him, and breed offspring too.

This is the Paraceratherium ARK: Survival Evolved

Appearance: With a height of about 4 to 5 meters, a length of about 7 meters, and a weight of between 15 and 20 tons, the Paraceratherium is a relatively large phenomenon. It has trunk-like, stocky yet long legs and a neck 1 to 1.5 meters long. His body resembles a mix of rhino and giraffe but is actually a hybrid of horse and rhino.

Wild: The Paraceratherium is a peaceful herbivore that you may encounter alone or in a small herd. Due to its size, it can afford to calmly go in search of food. But don’t be fooled, as soon as you attack him, he can become very dangerous due to his speed and power.

Tamed: The platform saddle allows you to use the Paraceratherium as a mobile base or as a base once you have tamed it. Due to its immense power, it is also very well suited as a transport animal, but also as a mount in battle. How to tame the Paraceratherium in ARK

Variant 1: For variant one, you take a crossbow or a bow and simply run away from the Paraceratherium. In between, you turn around and shoot him. Just make sure you keep enough distance, so you don’t get trampled. Also, note that the Paraceratherium can be fast if it wants to.

Variant 2: The second variant is only a little more complex since you need one or more large bear traps for it. You set this up and provoke the Paraceratherium by shooting the first tranquilizer dart at it. Now he should run after you and step into the big bear trap. After he’s pinned down, shoot tranquilizer darts at him.

Variant 3: The third variant is similar to that of the Giga. To do this, you build a U-shaped construction consisting of three large archways. You don’t need to use gates because the Paraceratherium is too big to fit through the open gate. Always leave a small gap between the archways. Then place a bear trap or two in the middle.

Now you lure in the Paraceratherium. You provoke him into following you. The important thing here is that you have a very fast mount or a very high movement speed so that you can also escape. If he follows you, run through the open side of your construction – but don’t step into the bear trap yourself. Once the Paraceratherium has been trapped by the bear trap, close the open side with a fourth archway and shoot it with tranquilizer darts until it’s K.O. This can take some time and resources.

How to tame him: Once he’s unconscious, put kibble or vegetables in his inventory and feed them to tame him. To keep the stun value up while taming, use Narcoberries or Narcotic.

How to craft the Paraceratherium Saddle and Platform Saddle

To craft the Paraceratherium Saddle, you need to be level 41 and 18 engram points to unlock the recipe. You now need the following resources to craft:

You can also craft a platform saddle for the Paraceratherium. For this you need level 50 and 24 engram points, as well as the following resources:

How to feed a Paraceratherium in ARK

Once you have tamed your Paraceratherium, it is important to know what it likes to eat. Paraceratheriums are herbivores, which of course makes the choice of food easier.

How to grow the Paraceratherium in ARK

The breeding interval for a Paraceratherium is 18 to 48 hours. After successful mating, if you play on default settings, the female Paraceratherium will be pregnant for about 8 hours. After 8 hours, you can welcome the little Paraceratherium baby into the world. As a baby, it takes up another 9 hours of your attention, during which you have to keep putting food in its inventory. Pay attention to the embossing intervals every 8 hours to tickle the greatest potential out of the baby.