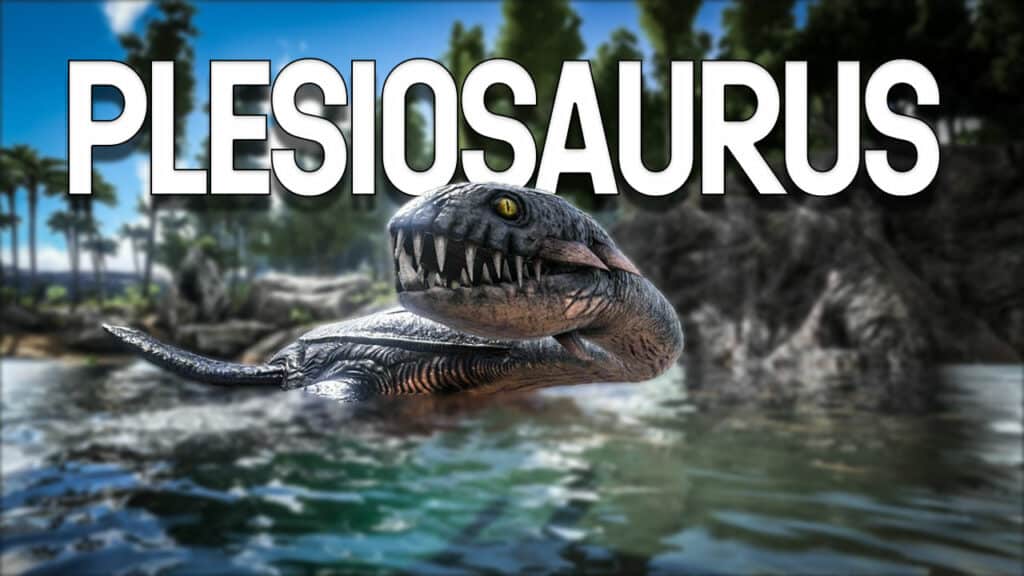 ARK: Survival Evolved: Plesiosaur – How to Tame, Feed and Breed!

The Plesiosaur in ARK: Survival Evolved is an aggressive, carnivorous aquatic creature that mainly hunts small creatures. Domesticated, he can not only carry a lot of weight because of his size, but also entire bases that are built on his platform saddle.

Find out everything you need to know about the carnivorous aquatic creature in our Plesiosaur guide. But also how to catch him, tame him, feed him, and breed offspring too.

This is the Plesiosaur in ARK: Survival Evolved

Appearance: If you only compare the necks, the brontosaurus clearly has competition from the Plesiosaur! Because the neck of the Plesiosaur is relatively larger than its teardrop-shaped body. It does not have a long tail fin, but it has four side fins that help it move forward. His teeth look too big compared to his head. Also, they are very sharp.

Wild: The Plesiosaur lives and hunts in the deep, much like the Leedsichtys. You often meet him in groups of 2 to 3 specimens. Since it has an aggro range similar to that of the Megalodon, it will attack you as soon as it sees you. In general, he will only attack creatures and beings that are smaller than him. He also mostly leaves medium-sized creatures alone. If he attacks you, you can save yourself by swimming to the surface, because the Plesiosaur prefers to stay in the depths.

Tamed: Once you have tamed the Plesiosaur, you can use the platform saddle to transport large amounts of materials, resources, or other dinosaurs, as well as people. Likewise, you can build a water base, a defense, or an attack base on the platform of his saddle. Similar to the Megalodon, the Plesiosaur is also very good at fighting underwater and thus offers you protection when exploring the water landscapes. How to tame the Plesiosaur in ARK

How to hunt the Plesiosaur: The simplest way to hunt a Plesiosaur is to build an enclosure from the beach with a gate into deeper water. A U-shape is sufficient for the enclosure, the side of which you can leave open on the beach. (see video). You leave the gate open for now. After that, you’ll swim into a Plesiosaur’s field of view and draw attention to yourself if necessary. He will identify you as prey and try to eat you.

Now you swim through the gate into the enclosure. The Plesiosaur is faster than you, so you should have tamed an underwater mount that you can swim in front of it, or at least one that’s tough enough to withstand some tough attacks.

When the Plesiosaur is in the enclosure, close the gate. If several Plesiosaurs have followed you into the pen, you must eliminate the ones you do not want to tame. Otherwise, they will try to eat your unconscious specimen. Once he’s in the enclosure, you can shoot him from land or in the water with tranquilizer darts until he’s unconscious.

If you like, you can build a platform in the enclosure, from which you can shoot better. This prevents damage from Plesiosaur attacks.

How to tame him: Once he’s unconscious, put meat or kibble in his inventory and feed him that. As a general rule, Kibble is the most effective tame. If you don’t have a kibble, the better the meat, the faster the taming. To keep the Plesiosaur down and the Stun up, use the Narcotic or Narcoberries.

This is how you make his saddle

To craft the Plesiosaur Saddle, you need to be level 64 and 40 Engram Points to unlock the recipe. You now need the following resources to craft:

You can also craft a platform saddle for the Plesiosaur. For this, you need level 84 and 50/80 engram points, as well as the following resources:

How to feed a Plesiosaur in ARK

Once you have tamed your Plesiosaur, it is important to know what it likes to eat. Plesiosaurs are carnivores, which of course makes the choice of food easier.

How to breed the Plesiosaur in ARK

The breeding interval of a Plesiosaur is 18 to 48 hours. 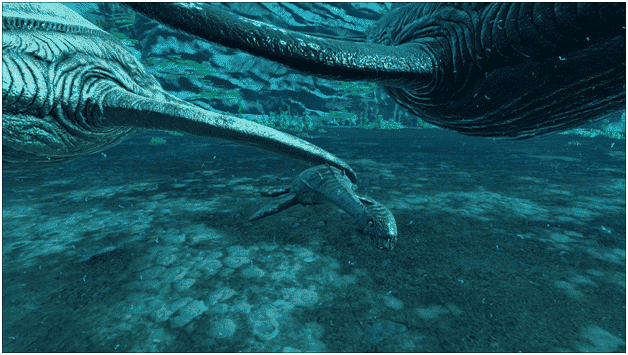 After successful mating, if you play on default settings, the female Plesiosaur will be pregnant for about 8 hours. After 8 hours, you can welcome the little Plesiosaur baby into the world. As a baby, it takes up another 11.5 hours of your attention, during which you have to keep putting food in its inventory. Pay attention to the embossing intervals every 8 hours to tickle the greatest potential out of the baby.

Once it gains juvenile status, it can feed on its own. The entire ripening period lasts about 4 days and 20 hours.