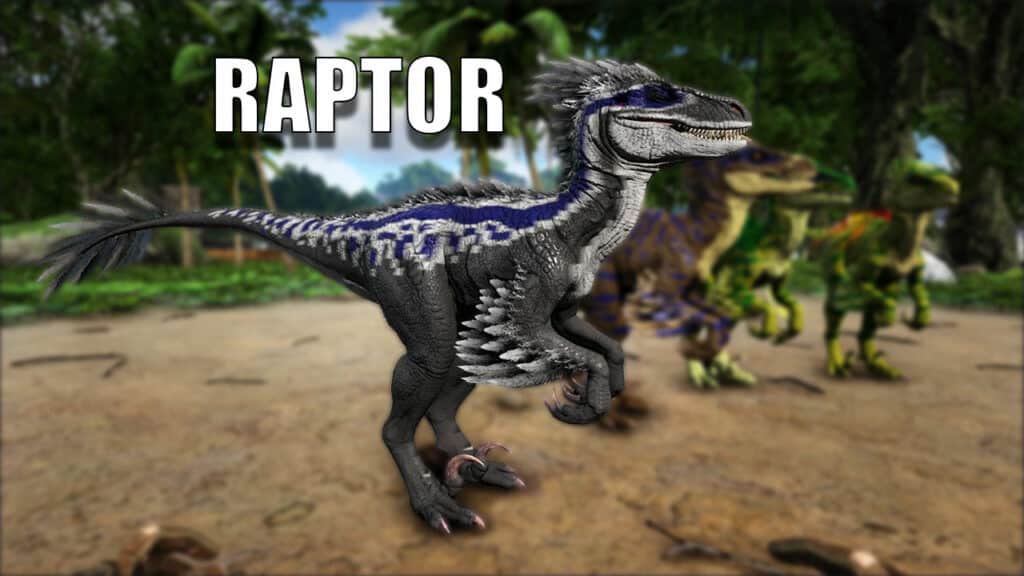 ARK: Survival Evolved: Raptor – How to Tame, Feed and Breed!

Especially in the beginning, it is difficult to explore the island in ARK: Survival Evolved without a mount. But you can relatively quickly tame one of the dangerous raptors, with which you can quickly travel ARK from the ground. We tell you how to tame, feed, and breed raptors.

Find out everything you need to know about the aggressive attacker in our Raptor guide. But also how to catch him, tame him, feed him, and breed offspring too.

This is the Raptor in ARK: Survival Evolved

Appearance: You can recognize the raptor by its very large and sharp foot claw, razor-sharp teeth, and its feathers on the back of its head and on its arms.

Wild: If you see or encounter a raptor, grab your bola or run the other way if you want to avoid a fight. Because as soon as this species has spotted you, it attacks you directly. But you don’t have much time in an attack, because the raptors are particularly aggressive and fast. Since he often hunts in small packs of 2 to 4 raptors, it’s best to stay alert; even if you’ve already knocked out an attacker, other raptors in the pack can still attack you. In these attacks, he often uses his large foot claw in leap and slash attacks.

Tamed: Once you have managed to tame him, he is a loyal companion and a popular mount. How to tame the raptor in ARK

How to hunt the raptor: Since the raptor will attack you immediately if you hit it or get too close, you have to hit it with a bola directly. This is best done when he runs towards you. But don’t underestimate his speed. Once the raptor is immobilized, shoot a tranquilizer dart in its face.

How to tame him: As soon as he is unconscious, you put meat or Kibble in his inventory and feed him with it, usually little meat is enough to tame him quickly. If the raptor threatens to wake up anyway, you can also feed it Narcoberries or Narcotic to keep the stun level up.

Another Method: Due to the Raptor’s lightweight, you can grab it with a larger Pterodactyl and drop it into a cage you built, then tame it there.

How to make the Raptor Saddle

To craft the Raptor Saddle, you need to be level 18 and 9 engram points to unlock the recipe. You now need the following resources to craft:

This is what a Raptor eats in ARK

Once you have tamed your raptor, it is important to know what it likes to eat. Raptors are carnivores, which of course makes the choice of food easier.

How to breed the raptor in ARK

The breeding interval of a raptor is 18 to 48 hours.

How to Hatch Eggs: Once you have obtained a fertilized raptor egg from a successful mating, hatching begins. For this, the ambient temperature of the egg should be between 20 °C and 28 °C. According to standard settings, the little raptor baby hatches after about 2 hours. After that, it takes about 4 hours of your attention, during which you keep putting meat in its inventory.

Once it gains juvenile status, it can feed on its own from a feeder. The total maturation time is about 1 day and 13 hours.