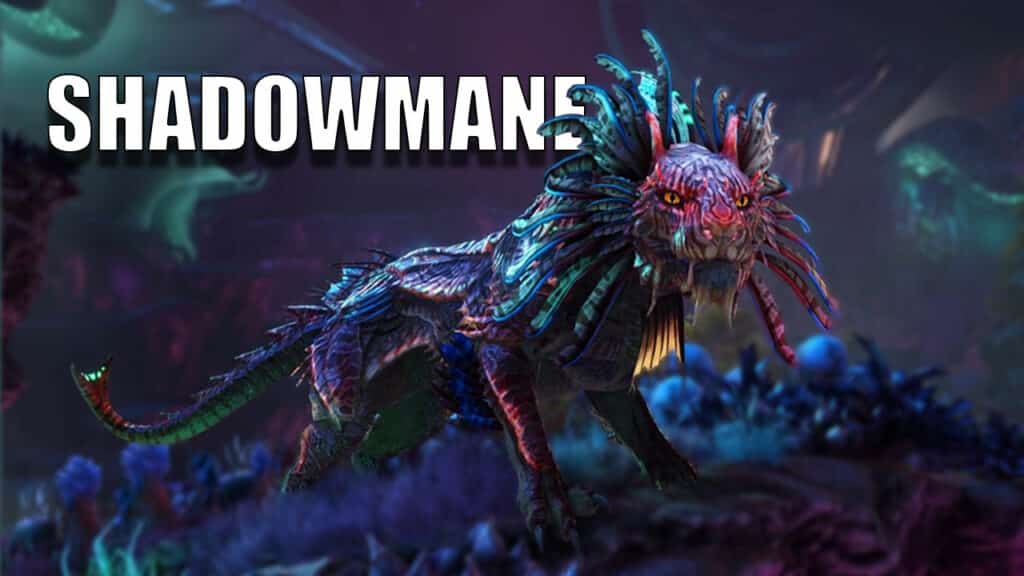 ARK: Survival Evolved: Shadowmane – How to Tame, Feed and Breed!

With Genesis Part 2, the Shadowmane came into the world of ARK: Survival Evolved. Due to its camouflage abilities, specimens can be difficult to spot at times. Tamed, they are useful mounts and combat animals. You can find her in Fjodur and in Genisis Part 2 in Rockwell’s garden.

Find out everything you need to know about the aggressive herbivore in our Shadowmane guide. But also how to catch him, tame him, feed him, and breed offspring too.

This is the Shadowmane in ARK: Survival Evolved

Appearance: The Shadowmane looks like a cross between a fish and a lion. You can clearly see the cat-like face. They have a sort of collar, like a lion’s mane, which is more pronounced in males than in females. This is very reminiscent of a lionfish. They also have a small fin tail that helps them swim.

Wild: You will seldom encounter the Shadowmane alone, as this is a pack animal that usually travels in small groups of up to 3 of its own kind. The highest-level male will take on the role of alpha in the pack and lead it. They primarily hunt herbivores and smaller creatures. When they spot prey, they chase after it and shock it. They use their teleportation skills.

At night, you can only spot the Shadowmanes by their glowing footprints, as most cloak with invisibility. If you provoke them in this state, they will reveal themselves and attack directly.

Tamed: Once you have managed to tame a Shadowmane, you have a mount that can quickly cope with any terrain. In addition, due to their abilities, they are also suitable for fighting and scouting. All Shadowmane Locations in ARK

The Shadowmane is discoverable in these spots:

How to tame the Shadowmane in ARK

There are two ways to tame a Shadowmane. For both, you need several filled fish traps, with at least 1.5 weight. The type of fish doesn’t matter. Basically, however, the larger the fish, the faster it is tamed.

Variant 1: Without a trap

You can also catch a Shadowmane without a trap by putting on a ghillie suit and looking for a specimen that is alone, or eliminate the others of the pack; because if a shadowmane discovers you, it will immediately wake up the entire pack, which will attack you aggressively.

Once the Shadowmane lies down and sleeps (rest times vary), sneak up on the Shadowmane from behind while crouching. Now you can feed him with the fish trap in slot 0. If he wakes up before then, sprint away immediately, the shadowmane needs a moment before he becomes aggressive.

After eating, he becomes invisible and goes somewhere else. The taming tracking system lets you keep an eye on him without getting too close.

First, you build a 2 x 2 trap with a foundation. Then you fly over this one. The Shadowmane will attempt to teleport towards you while attacking. If you’re above the box, he’ll fall in because he can’t fly. From this point on, you can no longer fly over the box, because the Shadowmane would teleport out again. When the Shadowmane starts bugging and attacking the walls, replace them, and he’s calm. If he doesn’t go to sleep, run a little further away and wait a moment.

When he has gone to sleep, you can approach him and feed him. Approach him where his head is sticking out slightly from the wall and feed him with the fish trap in slot 0. With this method, you also have to crouch when approaching so that he doesn’t wake up.

How to Feed a Shadowmane in ARK

Once you have tamed your Shadowmane, it is important to know what it likes to eat. Shadomanes are carnivores, which of course makes the choice of food easier.

How to breed the Shadowmane in ARK

The breeding interval for a Shadowmane is 18 to 48 hours. After successful mating, the female Shadowman will be pregnant for about 2.5 hours if you play on default settings. After 2.5 hours, you can welcome the little Shadowmane baby into the world. As a baby, it takes up another 5 hours of your attention, during which you have to keep putting food in its inventory. Pay attention to the embossing intervals every 8 hours to tickle the greatest potential out of the baby.

Once it gains juvenile status, it can feed on its own. The entire ripening time takes about 2 days and 1 hour.