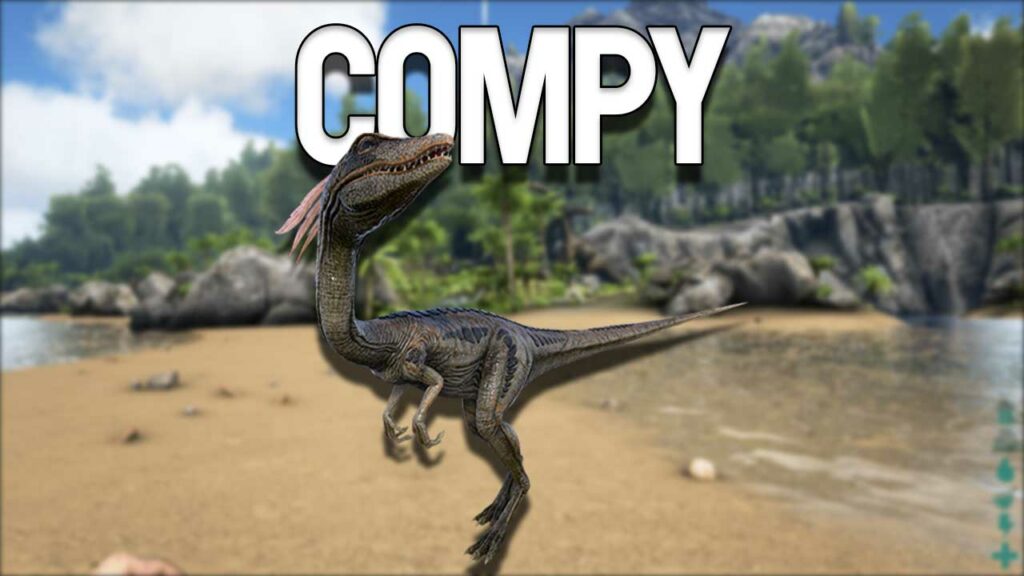 ARK: Survival Evolved: Compy – How to Tame, Feed and Breed!

Our ARK: Survival Evolved compy guide tells you everything you need to know about the little carnivore. But also how to catch him, tame him, feed him and breed offspring too.

You probably already know the Compy from the Jurassic Park films, in which he kills one or the other in the most agonizing way in a large pack. Also in ARK the compys will attack you in packs. You can find them almost everywhere, mostly near bodies of water.

This is the Compy in ARK: Survival Evolved

Appearance: Compys are tiny creatures compared to their larger predators. They look like a small copy of the Raptor, where the body has been made a little narrower and more agile. Compared to their slender body, the head seems a bit too big, on which they have three feathers that almost look cute again.

Wild: Compys can be found almost anywhere, but most commonly found on beaches or near bodies of water. They are small, aggressive carnivores that will attack you directly in a pack, but are harmless alone. Due to their speed and agility, it’s hard to hit these little predators in an attack as they try to bite a morsel out of you from all sides.

Tamed: If you only tamed a Compy, you can keep it as a cute little pet that can also sit on your shoulder. However, with a pack of compys, you can do a lot of damage and bring down even larger creatures. The larger your pack, the more dangerous it becomes. A pack of Compys can be very helpful, especially when exploring caves. How to tame the Compy in ARK

How to hunt a Compy: Compys are often found on the beach in packs, making one more difficult to tame. You should do all but one compy first. Simply stunning is not enough, as they quickly regain their senses. If you prefer, you can first snag all the compys with a bola or small bear trap, and then sort out which ones you want to tame and which ones you don’t.

Finish off the ones you don’t want to tame until you’re left with just the compy to have on your team. Now shoot the tranquilizer darts at him, preferably with a bow, since the crossbow usually takes the little ones straight into dinosaur heaven.

How to tame him: As soon as he is unconscious, it is best to put Raw Prime Meat or Raw Prime Fish Meat in his inventory and feed him with it. To keep the compy down and the stun up, it’s best to use the Narcotic, which you should have plenty of prepared since compys regain consciousness at an incredible rate.

How to feed a Compy in ARK

Once you have tamed your compy, it is important to know what it likes to eat. Compys are carnivores, which of course makes the choice of food easier.

How to breed the Compy in ARK

The mating interval of a compy is between 18 and 48 hours. How to Hatch Eggs: Once you have obtained a fertilized Compy Egg from a successful mating, hatching begins. For this, the ambient temperature of the egg should be between 24 °C and 32 °C and in the egg incubator at 28 °C. According to standard settings, the little Compy Baby hatches after about 1 hour. After that, it takes about 2 hours of your attention, during which you keep putting food in its inventory.

Once it gains juvenile status, it can feed on its own. The entire maturing time takes about 21 hours.