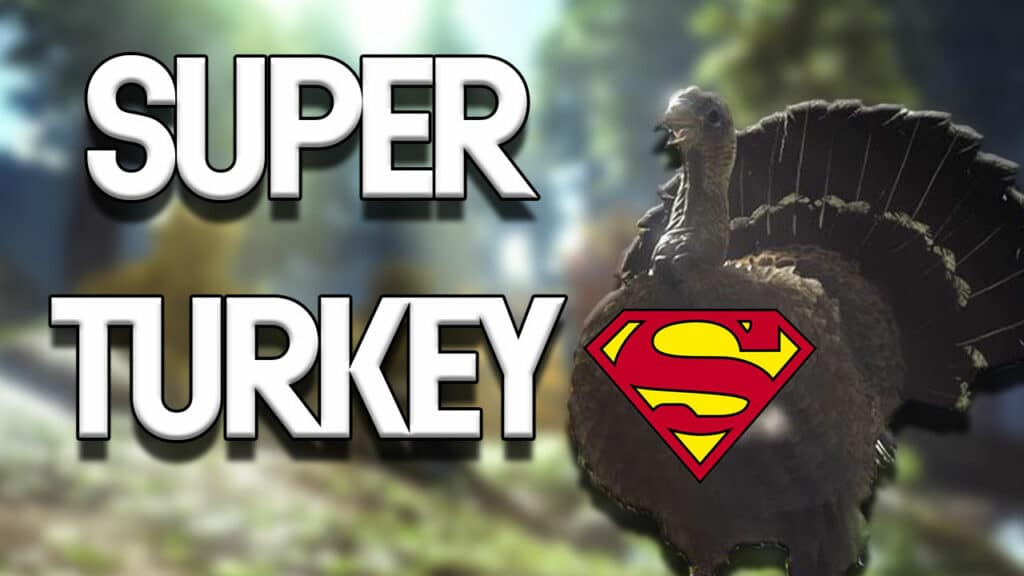 During the ARK Survival Evolved Thanksgiving event, the Turkey Trial, you will collect Wishbones. To get them, you should look for and defeat Super Turkeys.

The Turkey Trial in ARK Survival Evolved will you have collect Wishbones. They grant you special cosmetics, items, and also Chibis, however, you can collect them to summon the DodoRex as well. If you defeat the Super Turkey, you will get Wishbones as a reward. This guide tells you everything you need to know about the Super Turkey, and also where to find it and how to defeat it.

This is the Super Turkey in ARK

Appearance: The Super Turkey looks like a regular turkey.

Behavior: Similar to Dodos, Super Turkeys seemingly run aimlessly across the maps. Anyway, unlike the Dodo, it will hit you back once you attacked it. In addition, the surrounding creatures will attack you or flee, depending on which behavior is typical for them. For this reason, keep an eye on the creatures around you before attacking the Turkey.

How to defeat the Super Turkey

The Super Turkey has a very high defense level and can damage you lots with its attacks. Keep in mind that all the surrounding creatures will react as if they were attacked too, which means that there are more potential dangers around you, so it’s best to eliminate them before attacking the Super Turkey. The Super Turkey only receives 10 percent damage to attacks from other creatures, which can make it quite tricky to take it down with those.

These are the weaknesses of the Super Turkey in ARK

But the Super Turkey also has weaknesses, for example, it can’t destroy walls or anything else made of stone. So you can build a safe place from where you can shoot it with fire arrows or other arrows. It’s important to know that the Super Turkey is immune to torpor. Besides, it only receives 70 percent of regular damage when hit, while hitting its head will boost the taken damage by 3 times.

In water, the Super Turkey can’t attack, even though it’s a good swimmer. So if you have the chance to lure him into the water, you should definitely do so. Since it is also susceptible to bleeding damage, a Megalodon is particularly well suited. On the land, Carnotaurus, and Allosaurus would be good choices.

The Super Turkey also has no defense against certain attacks, like the elemental attacks of the Wyvern or the bite attack of the Therizinosaurus.

You have a very good chance of defeating the Super Turkey if you have a Giganotosaurus and a Carcharodontosaurus on your side.

Are you looking for more helpful guides on ARK: Survival Evolved? Then take a look at our ARK guide overview, where you will find more of our dinosaur, crafting, resource, and technology guides. You can also chat with us and other players on our Discord server. We’re looking forward to seeing you there!