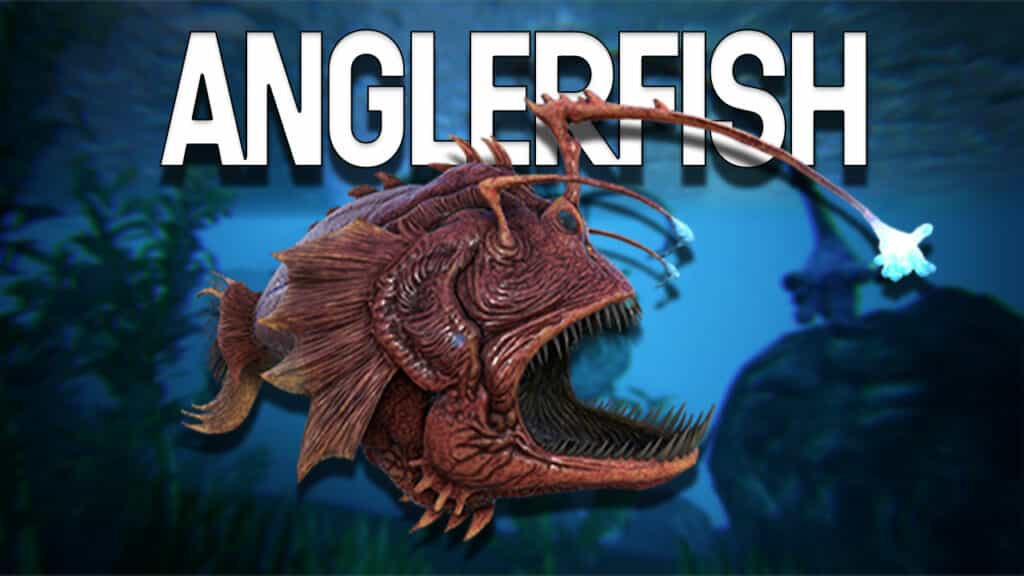 ARK: Survival Evolved: Anglerfish – How to Tame, Feed and Breed!

The Anglerfish in ARK: Survival Evolved is perfect for giving you light in dark waters or caves with its lantern on its head. You don’t even have to make a saddle for him, you “ride” him by hanging on his back.

Find out everything you need to know about the deep sea fish in our Anglerfish guide. But also how to catch him, tame him, feed him and breed offspring too.

This is the Anglerfish in ARK: Survival Evolved

Appearance: Like the real Anglerfish, the specimen you can find in ARK: Survival Evolved lives in the deepest depths of the ocean/sea and has three bioluminescent lures on its head that resemble a lantern. It also inherited the large mouth and pointed teeth from today’s Anglerfish.

Wild: With the help of its glowing lantern on its head, the Anglerfish lures its prey to it in the deepest waters. If you swim too close to him, he will attack you and your mount. If you manage to damage it, it will flee, but will shortly come back to attack you.

Tamed: With the help of a tamed Anglerfish you can explore the darkest corners or caves of bodies of water, since its lantern on its head brings enough light with it. You don’t need a saddle to ride him, you just hang on his back instead. However, the Anglerfish is not suitable for fighting, which is why you should have another tamed aquatic creature with you when exploring, which will defend you. All Anglerfish Locations in ARK

The Anglerfish is discoverable in these spots:

How to tame the Anglerfish in ARK

How to hunt the Anglerfish: The simplest way to hunt an Anglerfish is to build an enclosure with a gate in easy water. A U-shape is sufficient for the enclosure, you can leave the side facing the beach open. (see video). You leave the gate open for now. After that, swim into an Anglerfish’s field of view and, if necessary, draw attention to yourself as well (shoot them or something similar). He will identify you as prey and try to eat you. Now you swim through the gate into the shallow waters of the enclosure.

Once the Anglerfish has arrived in the enclosure, close the gate. Now you can shoot him from land or directly in the water with tranquilizer darts until he’s unconscious.

If you like, you can build a platform in the enclosure, from which you can shoot better. This prevents taking damage from Anglerfish attacks.

How to tame him: Once he’s unconscious, put meat or kibble in his inventory and feed him that. The better the meat, the faster the taming, but the dry food works best. To keep the Anglerfish down and the stun value up, it’s best to use the Narcotic or Narcoberries. Anglerfish’s anesthetic value is going down fast, so have enough Narcoberries or anesthetic ready.

How to feed an Anglerfish in ARK

Once you have tamed your Anglerfish, it is important to know what it likes to eat. Anglerfish are carnivores, which of course makes the choice of food more accessible.

How to breed the Anglerfish in ARK

The breeding interval of an Anglerfish is 18 to 48 hours. How to Hatch Eggs: When you get a fertilized Anglerfish egg from a successful mating, hatching begins. For this, the ambient temperature of the egg should be between -75 °C and 75 °C and in the egg incubator at 0 °C. According to standard settings, the little Anglerfish hatch after about 5 hours. After that, it takes about 4 hours of your attention, during which you keep putting food in its inventory.